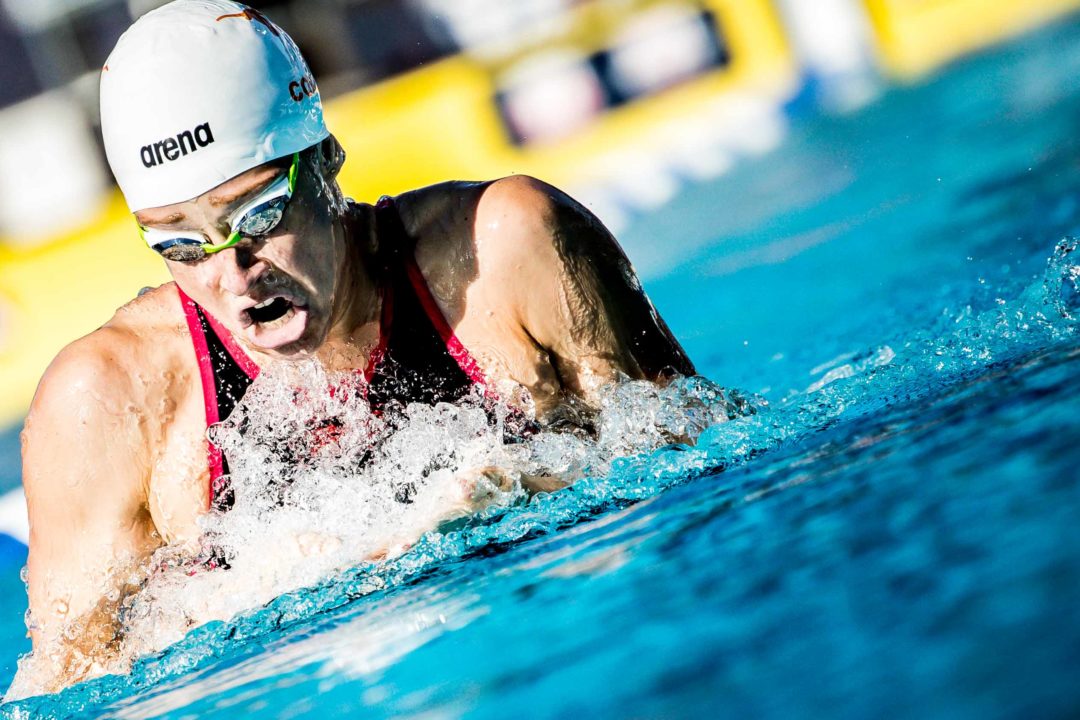 With only two heats for each women’s event, it was a subdued morning in San Antonio. Top-seeded Joanna Evans of Longhorn Aquatics picked up the first win of the day in the 400 free, clocking a 4:11.28 to come within .12 of her seed time. 15-year-old Jillian Cox of Austin Swim Club touched second in 4:18.40, nearly 5 seconds off her best time. Third place went to her ASC teammate Malia Rausch, who dropped 4.1 seconds to stop the clock at 4:18.66.

KyAnh Truong of Western Hills Athletic Club knocked half a second off her previous PB to win the women’s 50 free in 26.16. Houston senior Mykenzie Leehy was runner-up in 26.28. Texas freshman Grace Cooper edged Cory Shanks of South Shore Sails, 26.43 to 26.46, for third.

Top-seeded Coby Carrozza from University of Texas won the final heat of the men’s 400 free, posting the overall top time and breaking the Bill Walker Pool record with 3:54.34. His UT teammate Drew Kibler had been out first and led through the first 150 meters. UT’s Jeff Newkirk then took over the lead and looked like he was on his way to victory, with Longhorn teammates Alexander Zettle, Carrozza, and Kibler swimming even in second place. At the final turn, Carrozza sprinted down the final 50 meters and snatched the win away from his Newkirk. Newkirk finished 2nd in 3:55.04, with Kibler rounding out the top 3 in 3:58.98.

Another Bill Walker Pool record went down when Texas freshman Carson Foster won the 200 IM with 1:59.82. He led from start to finish, building up a 2-body length lead after the breaststroke leg, with his brother and Texas teammate Jake Foster, Jose Martinez of Aggie Swim Club, and Munzy Kabbara of Cypress Fairbanks in tow. Jake Foster tried to chase down his younger brother but settled for second place with 2:02.43. Martinez took third in 2:04.04.

The final event of the morning went to Texas junior Daniel Krueger who sprinted to a 23.25 win in the men’s 50 free. Jack Armstrong from Houston Bridge Bats touched second in 23.34. Alamo Area’s Cameron McAnany was 3rd from out in lane 8 with 23.47.