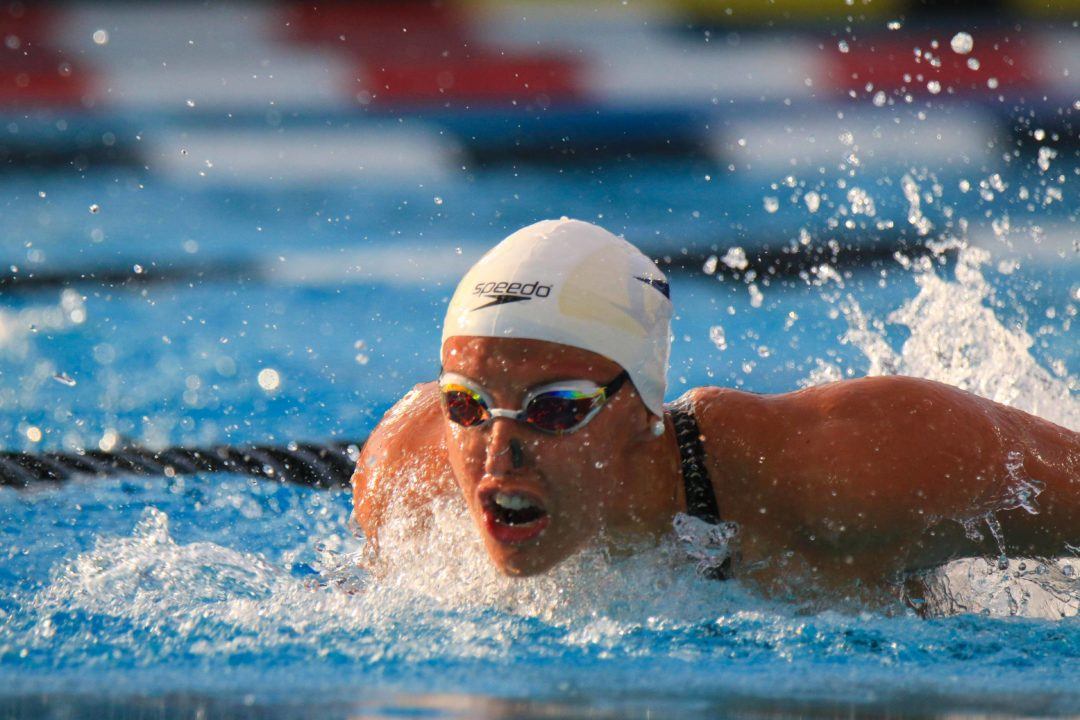 U.S. Open record-holder Kathleen Baker will go after a 200 IM this morning, hoping to jump to the top of the U.S. ranks for the season. Archive photo via Jack Spitser/Spitser Photography

Today’s morning session is broken into a women’s flight and a men’s flight. The women’s flight should run from about 9 AM to 10 AM Eastern time, with the men’s session from 12:15 PM to 1:15 PM Eastern.

We’ll get the 400 frees, where last night’s 800 free winners Ally McHugh and Marwan el-Kamash look to add their second wins.

In the 200 IM, Olympian Kathleen Baker is the big name – she’s the U.S. Open record-holder in this event and has a great chance to take over the lead of the national ranks today. Princeton’s Raunak Khosla is the top men’s seed.

17-year-old Rachel Stege outlasted last night’s 800 free winner Ally McHugh here. Stege jumped out to an early lead of about a second in the first 100. But McHugh closed in a blistering 1:01.9, nearly running down Stege.

Stege was the World Junior Championships bronze medalist in this event in 2019 in a 4:08.30. Her time this morning is the fastest she’s ever been, though, outside of August of 2019 when she went 4:10 and 4:12.1 at U.S. Nationals and 4:08 and 4:10 a few weeks later at World Juniors. Stege is a top-20 recruit in the current class of high school seniors, and will attend Georgia next year.

Kathleen Baker won this one easily, crushing the field by more than three and a half seconds. Her time was still 4.6 seconds off her career-best, and 4.2 seconds off of the time she put up back in February at the FNN Golden Tour in France.

At least for the time being, though, Baker should take over as the top U.S. performer this season. Prior to today, no swimmer had been under 2:16.4 in the event so far in this pandemic-adjusted 2020-2021 season. Baker is the second-fastest American of all-time in the 200 IM, and appears to be looking to add the event to her Olympic lineup for the 2021 Tokyo Games.

Maggie MacNeil won the women’s 50 free in 25.40. The Canadian world champ exactly matched her career-best time, put up at Canada’s World Champs Trials meet back in the spring of 2019.

MacNeil is currently competing in the NCAA for the University of Michigan. Swimming right on her lifetime-best here has to be an exciting sign for MacNeil’s prospects in the 100 fly later today. That’s the event where MacNeil won her World Champs gold medal in 2019.

Louisville alum Mallory Comerford was second in 25.59. That’s well off her career-best of 24.80, but is pretty comparable to what she was going on the Pro Swim Series last winter before the pandemic shut down most training and competition. (Comerofrd was 25.48 at the Knoxville Pro Swim Series back in January).

Albiero dropped .02 seconds from her lifetime-best and will move to just outside the top 100 all-time in USA Swimming history for the 17-18 age group.

There will now be a break of about two hours as the men warm up for their session.

Last night’s 800 free winner Marwan el-Kamash added his second win of the week so far. El-Kamash was 3:48.87, just two tenths off his incoming seed in the event. El-Kamash is an Egyptian Olympian whose best time comes from the 2017 World Championships at 3:46.36.

Michigan’s Patrick Callan (listed in results as ‘Kevin Callan’) was second in 3:49.34. That’s a lifetime-best and the first time ever under 3:50 for Callan, an outstanding short course yards freestyler just starting to hit a breakthrough in long course meters. Callan went 4:11.7 in the 500-yard free last college season so his improvement here tracks with that trajectory.

Princeton’s Raunak Khosla led the men’s 200 IM, narrowly beating Kyle Maas out of Michigan Lakeshore Aquatics. Khosla was 2:03.19, about a second and a half off his lifetime-best, but behind only two other swims in his career, both from 2019 Nationals.

It was a tight field all the way down, with the top four all coming in within eight tenths of one another.

Louisville grad Andrej Barna won the 50 free to close out the session. The 2020 Louisville senior went 22.76, swimming in his first fall season as a post-graduate.

Barna represents Serbia internationally. He’s been 22.2 in his career, from the summer of 2018. But this morning’s swim was his best time in the year 2020.

16-year-old Quintin McCarty had a huge time drop in taking second. McCarty came out of the short course yards seeds, coming in with a seed time of 20.28. But in long course meters, he’d never been under 24.1. McCarty broke 24 and skipped the 23s entirely, going 22.86 for second place and nearly passing Barna for second.

did they just not turn the stream back on for the guys session?

where can we watch the men’s friday morning session? it’s not up on the USA Swim site

Might want to check out the Richmond site – women’s session is over and winning times all faster than this one. Torri Huske went 2:11.18 in the IM. Kate Douglass 24.99 50 free.

We’re not live recapping Richmond, but just published a mid-session wrap. There’s definitely going to be some fast swimming there, too!

There goes my chances of ever making an olympic trials cut I guess.