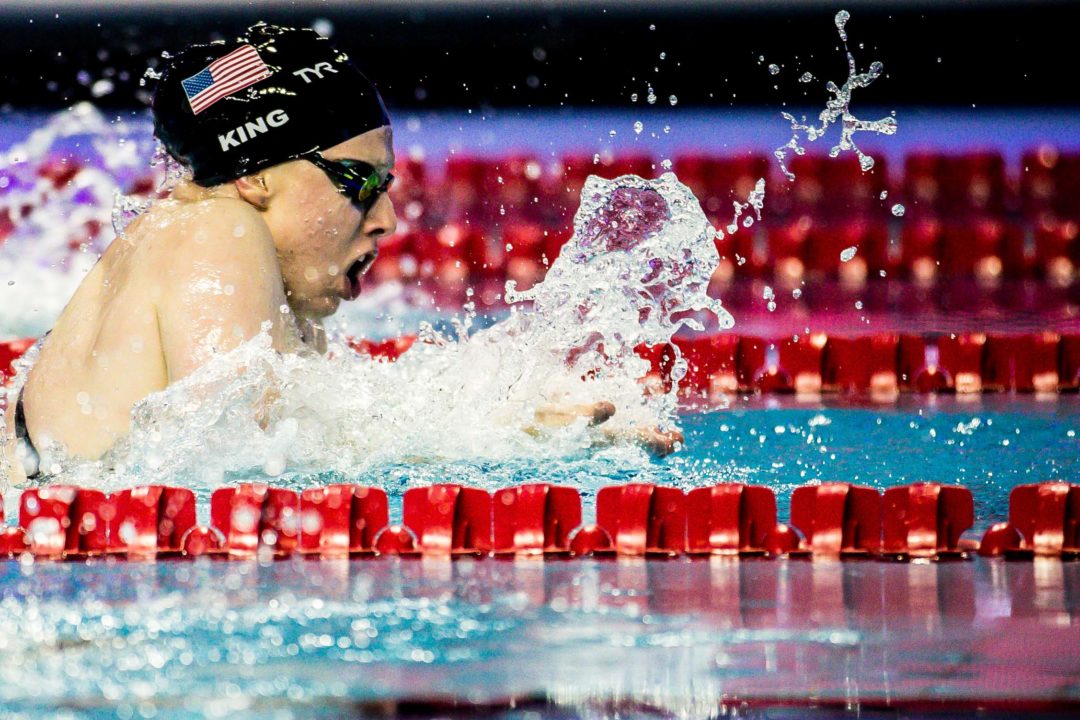 Lilly King vs Yulia Efimova is one of swimming's greatest rivalries with two of its most colorful personalities in the sport. Archive photo via Jack Spitser/Spitser Photography

It’s one of swimming’s greatest rivalries with two of its most colorful personalities.

Lilly King is so close to the stereotype of the brash American you can’t help but wonder if that’s exactly what she’s aiming for. Maybe it’s some sort of modern-day marketing stunt. King is fearless with her words. Brash, supremely confident and very convinced of her own training intensity, King rides a wave of momentum and is all-but-unshakable in the big moments. She’s a pure power swimmer, strongly-built with a breaststroke that moves a ton of water.

Russia’s Yulia Efimova swims the stroke a completely different way. Taller and leaner than King, she’s an efficiency swimmer, smooth and graceful with excellent distance per stroke. Efimova moves through the water with ease. But as King represents the traits fairly or unfairly associated with her country, so does Efimova. She’s had multiple scrapes with anti-doping regulations, taking a 16-month suspension back in 2014 and narrowly avoiding a lifetime ban with another violation in 2016.

King beat Efimova in this event by about six tenths at the Rio Olympics, with tensions between the two heating up. King called out Efimova’s spotty history with banned substances and wagged her finger at Efimova through a TV screen during semifinals. Then in 2017, King smashed the world record ahead of Efimova in this race, with teammate Katie Meili touching out Efimova for silver.

Efimova appears to be winding up for a revenge tour, though. She won all three breaststrokes at Euros last summer and led the world ranks with a 1:04.98 – the only sub-1:05 swum worldwide last year. King, meanwhile, won gold at Pan Pacs in 1:05.44, perhaps more focused on the 200 breast where she needed a big performance to get back onto the U.S. Worlds roster. Efimova also put up the fastest 100 breast split in history (1:03.95) while King was just 1:04.8 on an American relay that lost badly to Australia.

While those two are likely 1:05s and potential 1:04s or better, the rest of the field is absolutely littered with probably 1:06 types. Getting into the final is going to be a mad dash, even with some notable names absent.

China’s Shi Jinglin was fifth last time around at Worlds, and won bronze at Asian Games last summer. But we can’t find record of a swim from her yet this season. Shi was 1:07.3 at Asian Games last year and 1:06.7 domestically, but she’ll probably need to be more at her 1:06.2-pace from 2015 to fight for a medal.

Canada’s Kierra Smith took a controversial DQ in her best event, the 200 breast, at Canadian Trials, and she needed a lifetime-best 1:06.54 in the 100 to make the Canadian team. She’s now a medal threat here, though, after taking 6th in 2017 and silver at Commonwealths last summer.

Jessica Vall of Spain is the final returner from the championship heat. She’s another swimmer better at the 200, but with a medal shot here. Vall has been 1:06.4 in her career, and already went 1:06.6 this season.

Last season in the world ranks, there were 14 women between 1:05.9 and 1:06.9, and most of them will be competing for A finals spots in 2019. Most of them won major medals last summer, looking to springboard into the World Championships year:

Just ahead of Aoki at Pan Pacs was Australian Jessica Hansen, who blasted a 1:06.20 for silver behind King. Hansen hadn’t been under 1:07 prior to last July, and her fast rise is a big reason why the Australian medley relay has become a true world power. Hansen has only been 1:06.9 so far this year, but has a great chance at a medal if she can perform as well as she did against elite competition last summer.

Italy’s Arianna Castiglioni was the Euros bronze medalist (1:06.54). Italy is building its way toward being a world swimming power, and their roster showed up in full force last summer. Castiglioni could be a key medal-winner if the team shows up with the same kind of fire in 2019.

The young swimmer to watch, though, is Tatjana Schoenmaker out of South Africa. She rose to win 100 and 200 breast golds last year at Commonwealth Games, beating a good crew of Canadian and British threats. Schoenmaker, 22, was even better this year, winning both events at World University Games / Summer Universiade.

Why is Efimova still allowed to compete? Once a drug cheat……..

How was Kierra Smith’s DQ at Canadian Trials controversial?? Her elbows clear the water every stroke, if anything it’s controversial that she was not DQ’d in the 100.

I’m holding my thumbs that Sophie Hansson will take a step forward this championship. She’s been sub-1:08 a dozen times, but haven’t improved her PB significantly since 2015 – when she grabbed silver at World juniors in 1:07.77 (it’s 1:07.53 today)

Some of the top swimmers are absent from the 100 breast this year (Meilutyte, Suzuki, McKeown and O’Connor to name a few), so if Sophie drops about half a second it just might be enough to make the final.

The finger wagging was a media creation. King didn’t go out of her way to be provocative. The TV cameras simply caught her wagging at the TV monitor. Not sure it’s fair to make her a provocateur.

11
-3
Reply
South of the Border
Reply to  Scribble

To me it’s far, far worse if she wasn’t trying to be provocative. Standing and wagging your finger at a television? When you know there’s a million television cameras around? And not planning to get caught? I dunno, that doesn’t seem like Lilly’s style…

2
-5
Reply
Ervin
Reply to  South of the Border

I’m not sure if she was or she wasn’t, but i like it….attitude and personality is refreshing to see in swimming

If Lilly King isn’t the love child of macho man and hulk hogen, then I’ve made the Olympic team, shook Obama’s hand, and survived a copperhead bite (one of those isn’t true). Kings first words were “hell yeah brother” and her baby bottle was a PBR can. She’s a mix of a yellow Lab and a golden eagle, and the only crayons in her crayon box are red white and blue. Her first car was a 1972 ford bronco, and was conceived at a CCR/Bruce Springsteen concert. God bless Lilly, and God Bless ‘Merica

&Ragnar: and the best part is that she’s not likely to turn into another Megan Rapinoe!

You mean no more World titles?

Megan Rapinoe is great! The world needs more strong female athletes for young girls to look up to like her and King.

Are you implying other women who win world titles aren’t good role models? What sets Rapinoe apart other than she doesn’t participate during the anthem?

King has shown time and time again she’s the one to beat.