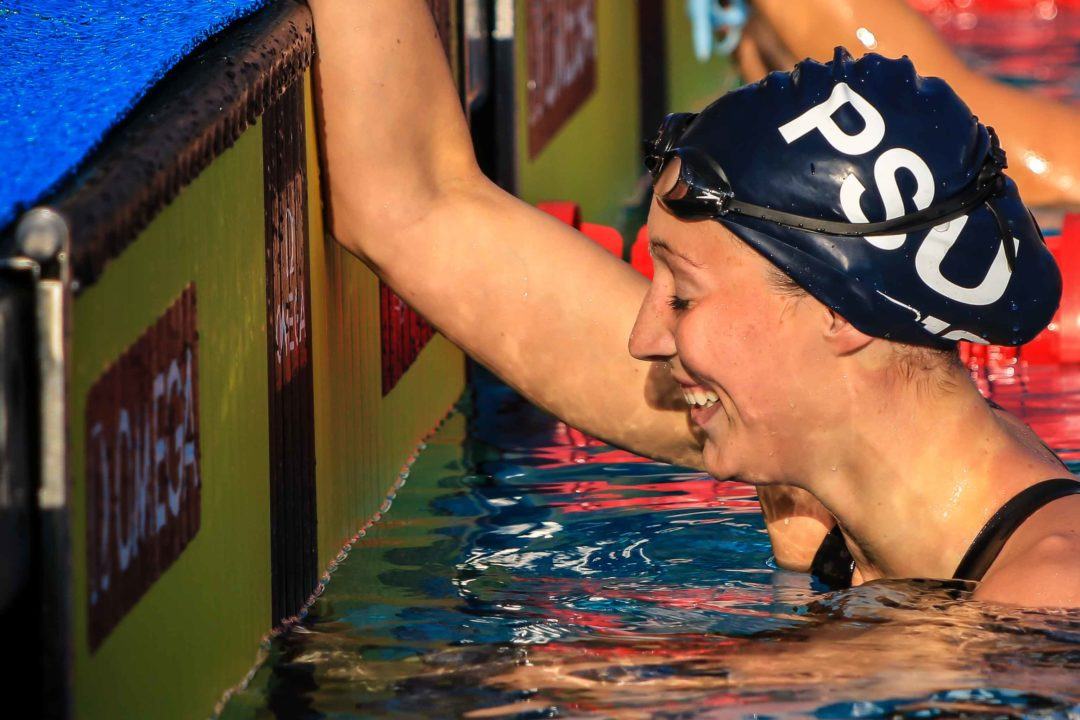 With four of 2018's top-10 finishers out of the NCAA, there's room for some new blood in the mile. Archive photo via Jack Spitser/Spitser Photography

Last year, this race boiled down to two factors: by just how much Katie Ledecky would win, and who would step up in the crowded race for second place.

Now, with Ledecky out of the picture, that former race for second has simply become that for first. Additionally, the 2018 field graduated third-place finisher Hannah Moore, sixth-place G Ryan, and 10th-place Kaersten Meitz, bringing some new faces into consideration for 2019’s top eight.

Leading the way in the lifetime best column is Penn State senior Ally McHugh, last year’s runner-up. In 2018, she dropped nearly 16 seconds to win Big Tens in 15:43.34, and we thought it unlikely she would further improve at NCAAs – but we were wrong. McHugh shaved off another seven seconds, going 15:36.27. This season, she went her second-best time ever at the Tennessee Invite in November (15:41.36), and she was 15:47.18 at Big Tens this year; if she has another big taper drop in her, McHugh seems like the safe bet.

On a trajectory reminiscent of McHugh’s last season is Hawaii junior Phoebe Hines, who in November took almost 13 seconds off her lifetime best to go 15:41.35 at the Art Adamson invite and win the event by over 25 seconds. She came back down to earth a bit at the 2019 MPSF Championships last month, going 15:45.68 with no one to race — she was the conference champion by a full minute. With McHugh and company nearby, matching or improving upon her best seems plausible.

Our No. 3 pick is perhaps the field’s biggest wild card. Six-foot-four Arizona State junior and 2016 Olympian Cierra Runge has switched teams twice and taken a year off of the NCAA since her last NCAA Championships appearance. Her best mile time of 15:40.17, the second-fastest in the field, is from over four years ago. Runge’s sophomore year best time from Big Tens in 2017 was actually exactly what it is this year (15:51.72), but she scratched the event at NCAAs so we don’t know if she had a time drop in her. Complicating matters even more, Runge’s Pac-12 performance this year was her first 1650 of the season, and she was swimming in the early heats. If she could return to form and pull off at least a podium appearance, it would certainly begin to bring some closure to one of the NCAA’s more perplexing story lines (we also have her picked to win the 500, which would truly cement the comeback).

The race for the No. 4 through 6 spots is practically a toss-up. Stanford teammates Megan Byrnes (a junior) and Leah Stevens (a senior) went 4-5 in this event last year. Byrnes had been 15:49.38 at the 2018 Pac-12 Championships, and Stevens 15:52.36. This year, Stevens won the Pac-12 title in 15:51.26 and was well ahead of the final heat field (Runge took second from an early heat); Byrnes took sixth in 16:05.50. Unless Byrnes has a massive taper drop up her sleeve — which she could, for all we know — Stevens might have a little more left for the final mile of her collegiate career, especially in a field she can race. Also in the mix should be Ohio State junior Molly Kowal, who hit a best time of 15:49.53 in February at Big Tens. Last year, she dropped a second from conference to NCAAs, but in 2017, she gained 12.

Florida freshman Leah Braswell is another top eight contender whose lifetime best is from this season. In fact, she dropped nearly 17 seconds at the Georgia Tech Invite in November, then another six at SEC in February for her 15:53.54. Could she “pull an Ally McHugh” and have another PR left for NCAAs? Possibly — but even if she just comes close to her best, she should make the top eight. Rounding out our top eight is Texas’ Joanna Evans, who was 15:51.74 in December 2017, but scratched the race at NCAAs last year. Going back two years, she was 16:08.50 in-season in 2016-2017, then 15:54.46 at NCAAs. Given how much faster she’s been in-season already this year, hitting her best time seems doable.

WHAT ABOUT THE QUEEN HERSELF CASSY JERNBERG ??????

You forgot Tamila Holub. Top 8 last year I believe. 15:55 at ACC and swimming under Bernardino this year. I would keep an eye on Tamila and Jahns from NC State. You can never count Dino’s army out.

Arizona’s Hanna Cox trains in Cory Chitwood’s D Group and is poised for a big meet. She should finish in the top eight.

I’ll put Evie Pfiefer as the dark horse. She’s a big taper swimmer and given that theTexas swimmers didnt taper for the conference meet, they could drop chunk of times.

I think she’s got a good shot too. However, our internal dark horse rules preclude us from picking an A finalist from last year as a dark horse. Otherwise it tends to devolve into just a pick for 9th, which is not the intention.