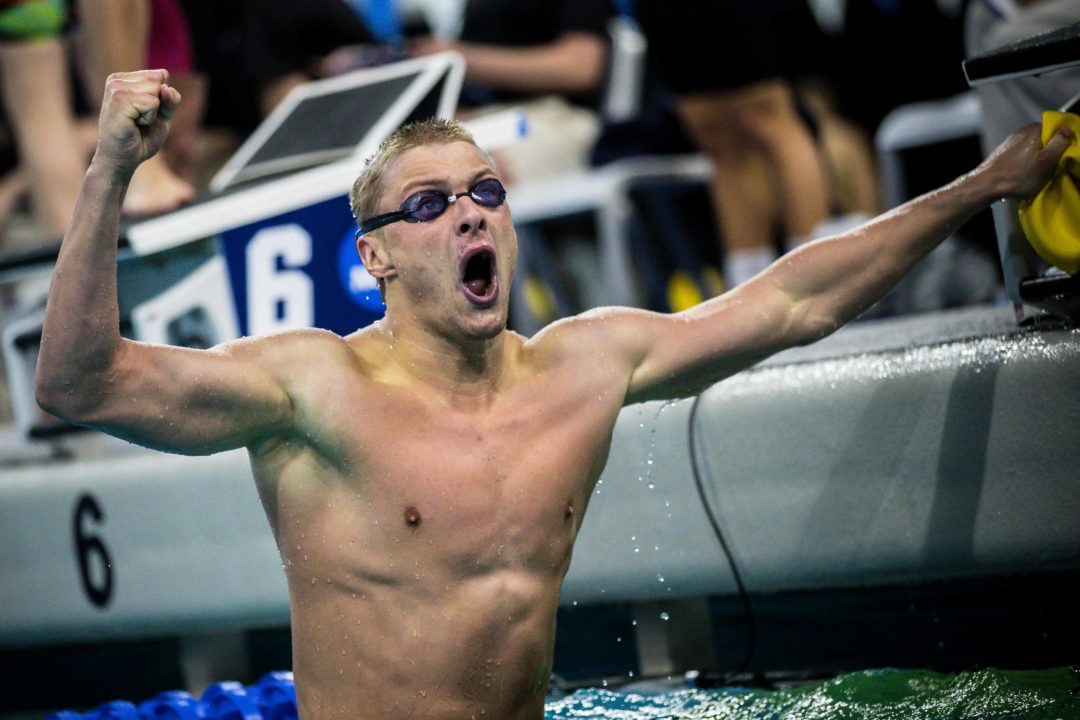 With two swimmers in the A-final of each event tonight, California will have eight championship final swims tonight, more than twice as many as any other school.  In what has been a near-perfect meet for Dave Durden’s squad, the Golden Bears got both strong performances from their top-seeded swimmers and significant time drops from guys who were seeded outside of scoring position (Ryan Hoffer in the 100 free, Carson Sand in the 200 breast) are also the top seed in the 400 freestyle relay.

Notably, Texas is the only other squad that has two swimmers in an A-final of a single event.  The Longhorns started off hot, with two A-finalists and two B-finalists in the 200 backstroke, but an underwhelming 100 freestyle (Townley Haas stuck in the B-final, and Tate Jackson out entirely) effectively ended the team title race.  However, the Longhorns still have the second-most swims in tonight’s final session, including three A-finalists.

Indiana and NC State are essentially locked into third and fourth place, respectively, following the morning events.  Both schools have 3 swimmers “up” and 1 swimmer “down”, along with an A-final appearance in the 400 freestyle relay.

Some other interesting tidbits from further down the list in the team race:

For those unfamiliar with swimming terminology, the concept of “Ups” and “Downs” is a good way to track which teams performed best during prelims. In prelims at the NCAA Championships, swimmers and divers qualify for one of two finals heats: the top 8 finishers make the A final, and places 9 through 16, the B final. In finals, swimmers are locked into their respective final, meaning a swimmer in the B heat (spots 9-16) can only place as high as 9th or as low as 16th, even if they put up the fastest or slowest time, or score the most diving points, of any heat in the final.

Imagine when Cal gets a strong diving team. Now with their own proper facility it’s possible.

its crazy to think they didn’t have a Diving facility until three years ago.

They can only get a strong diving team if they give divers scholarships which will take away swim scholarships. It’s not like they had/have an unfair advantage— money is just put elsewhere.

Cal didn’t have a tower until the new facility opened last year. That is the what is meant by a proper facility.

If it weren’t for diving there would be no swimmin at Tennessee! Except for the Lady Vols!