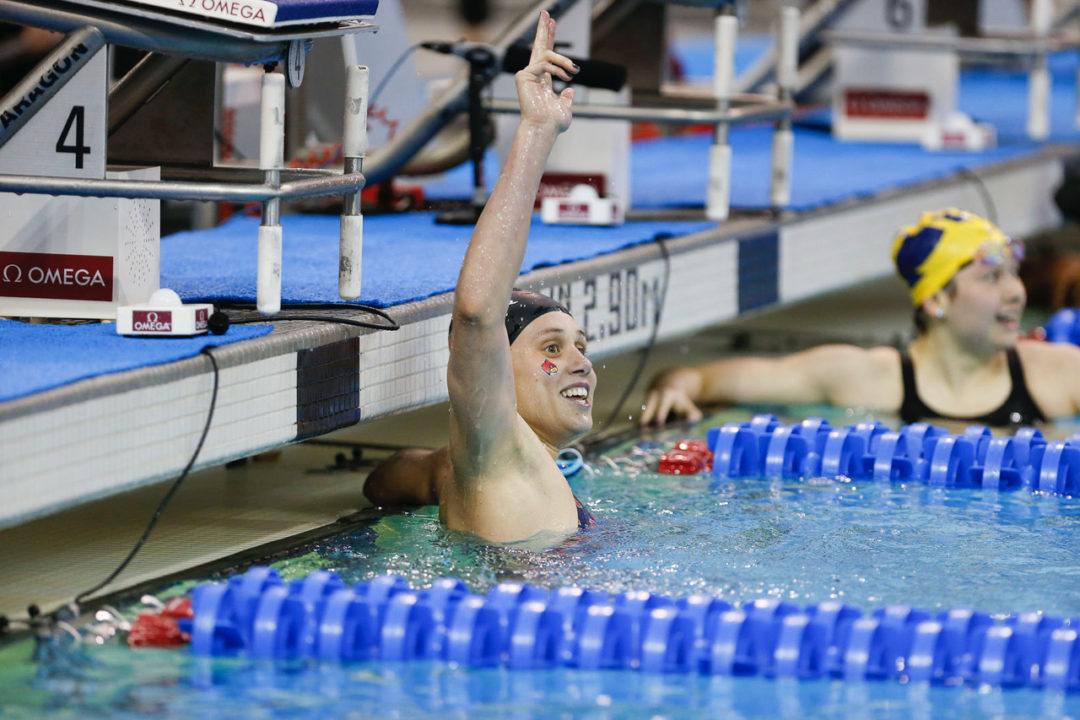 The 2018 Women’s NCAA Championships will come to a close tonight with day 4 finals. Swimmers will compete individually in the 1650 free, 200 back, 100 free, 200 breast, and 200 fly, with the 400 free relay coming at the end of the session. Read on for a few things to look out for in tonight’s finals races.

#1: Wisconsin’s Beata Nelson vs. Cal’s Kathleen Baker in 200 Back

Cal’s Kathleen Baker is the defending NCAA champion in this event, but Wisconsin’s Beata Nelson is a major threat. This morning, Nelson swam to a lifetime best 1:49.33, making her the 6th fastest performer in history. Baker wasn’t far off that in 1:49.57. They aren’t the only title contenders, as Stanford’s Janet Hu and Kentucky’s Asia Seidt have also been sub-1:50. Seidt was just a hundredth shy of her best this morning. All 4 are ranked among the 10 fastest performers in history.

Louisville’s Mallory Comerford had a huge performance in last night’s 200 free, while Stanford’s Simone Manuel had an off swim. However, Manuel’s sprint freestyle has been great here. She was .01 shy of her best in the 50 free and blasted a 20.45 for the fastest split in history on last night’s 200 medley relay. Comerford was the only swimmer to break 47 this morning. At her best, Manuel seems unstoppable. She’s the first woman in history to have broken 46. But Comerford can’t be counted out. She’s shown great speed this week and has pulled off an upset before (see last season’s 200 free).

#3: Ella Eastin Could Go 3-for-3 in American Records

Stanford’s Ella Eastin has been on fire this week. She blew away the American Records in both IMs this week. This season, Eastin set the 200 fly American Record at Pac-12s, becoming the first woman to break 1:50 in textile. It looks like it could be Eastin against the clock tonight. Her best time is far ahead of anyone else’s, and with the way she’s been performing, we could see a time in the 1:48-range tonight. If she breaks her own record, Eastin will have won 3 individual races and set 3 American Records in the last 3 days.

Where can I watch?? Can’t find the event on ESPN

Can she “challenge” her? It’s not Ledecky in the mile.