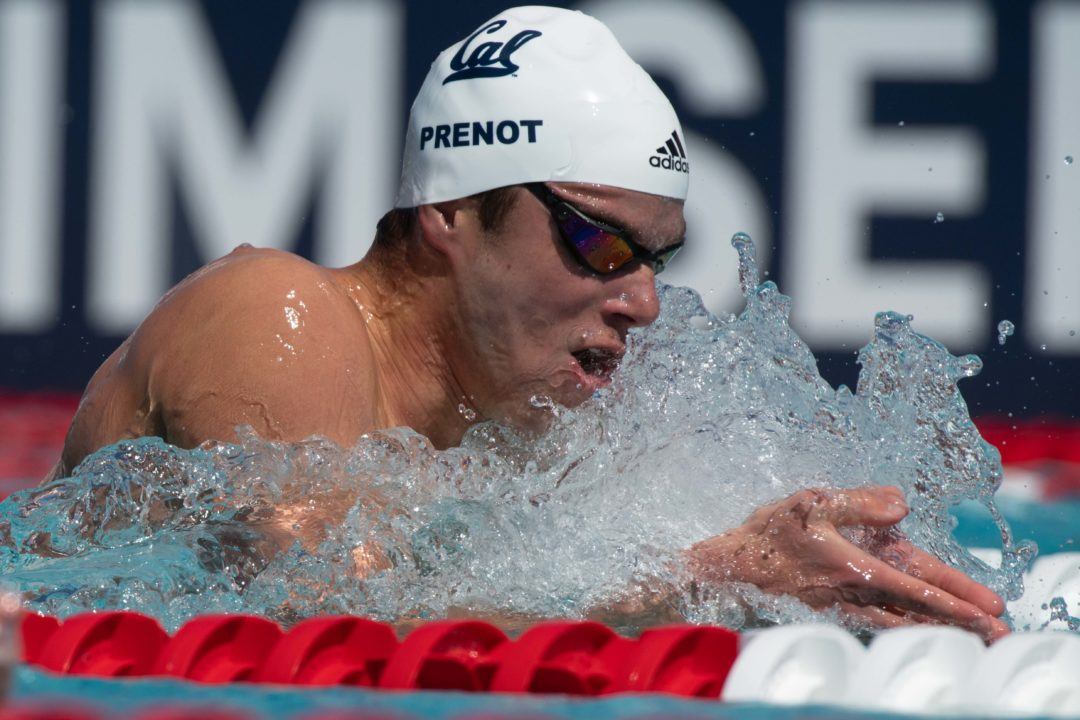 After narrowly failing to qualify for the 2017 World Championships team, Olympic silver medalist Josh Prenot looks to return to the top of the U.S. 200 breast field. Current photo via Mike Lewis/Ola Vista Photography

After narrowly failing to qualify for the 2017 World Championships team, Olympic silver medalist Josh Prenot looks to return to the top of the U.S. 200 breast field. Prenot, the American Record holder, was less than a tenth shy of making the team as he placed 3rd in this event behind Kevin Cordes and Nic Fink at 2017 nationals. So far this season, Prenot is the 5th fastest man in the nation, sitting one spot ahead of Fink. Cordes, who posted his lifetime best 2:07.41 at last summer’s nationals and is the 2nd fastest American ever, is 15th currently, but it’s not unusual for him to be significantly slower in season. Like Cordes, Fink went his lifetime best 2:08.56 last summer to qualify for Worlds, so both kept strong momentum coming out of the Olympic year. Prenot, however, will be fighting back after some disappointment that could motivate him to push himself back to the front of the pack this time around. Cordes may not make it easy, though, as he was a second ahead of the field at last summer’s nationals and closed within 3 tenths of Prenot’s American Record.

We could see those 3 battling closely, but we shouldn’t count out Texas postgrads Will Licon and Andrew Wilson. At 2016 Trials, Licon established himself as the 4th fastest American in history with a 2:08.14. He’s also the American Record holder in the 200 yard breast. At the Atlanto Pro Swim in March, Licon was just a couple of tenths shy of his time from 2017 nationals in 2:09.47. This is also his first year focusing completely on long course as a pro swimmer, so he may have a big swim in store. Wilson is the 5th fastest American ever at 2:08.37. One of the challenges Wilson will need to overcome is his tendency to swim a bit faster in prelims than finals. He’ll likely need to save his best swim for finals to grab a spot in the top 4 here. He’s currently the fastest man in the nation this year with his 2:08.52 from March. These two have the benefit of training together, so they could push each other to some great swims.

Junior standouts Daniel Roy and Reece Whitley will also be pushing each other again after going 1-2 respectively in the 200 breast at the 2017 World Junior Championships. Roy cracked 2:10 this year with a lifetime best 2:09.73 to win the Indianpolis Pro Swim, breaking the 17-18 NAG Record in the process. Whitley’s best is about a second back in 2:10.82. He also set a 200 breast NAG Record this season, taking down the yards mark as he went a 1:51.43 to place 2nd at Winter Nationals.

World Champion IMer Chase Kalisz may decide to throw his hat in the ring here. He’s been looking good in the 200 breast this season, breaking 2:10 for the first time ever with his 2:09.90 at the Indianapolis Pro Swim in May. The 200 breast comes on day 2, so it doesn’t conflict with any other event in his schedule. Having gone that fast in-season, he has the potential to compete for a spot in the top 3 if he goes for it on taper.

I get that the 200 lcm breaststroke is a terrible race that should only be swam under duress, but still…

Finnertys never really focused on LCM. He’s a crapshoot on guesses. He could be slow to develop or could make an impact right away. Nobody knows.

Daniel Roy is coming on strong. He is going to be challenging the older guys. He’s got an excellent sense of pace, which is important in the 200 breast.

The 200 LCM breaststroke is one of the more exciting races to watch. At the 2017 Nationals, the race for 2nd came down to the final stroke. Fink, Prenot and Wilson finished together, with Fink moving from 4th to 2nd down the stretch.

You guys are sleeping on Licon and really sleeping on Roy…I’m guessing top four goes something like this:
Updated Nationals breaststroke predictions:
200
1) Cordes
2) Roy
3) Licon
4) Prenot

Nic Fink making the US international team (WC, Olympics, Pan Pacs) all but one year since 2013 says something as to how consistent he is and how consistently underrated he is. The 50 breast shootout champion will turn some heads once again come Irvine.

Whichever US breaststrokers are selected, they will face a fierce battle with the Japanese at Pan Pacs. 🗺

its gonna be a great race indeed

The thing is, this is one of the WORLD’S deepest events. You could probably list 10 people off the top of your head who have a shot at breaking the world record.

How can you not love Prenot?

He kinda flipped out at natties last year

Haha, i wouldn’t use the word kinda

He’s a poor loser and has no respect for the sport, fans, families and team-mates.

Prenot is one of the most outstanding and highly respected swimmers around. Always there for anyone in need of a boost or encouragement whether that be for the sport, fans, families, or team mates. Plus he has a physics degree to boot. Excellence and integrity inside and outside of the pool are just a few of his strong points.