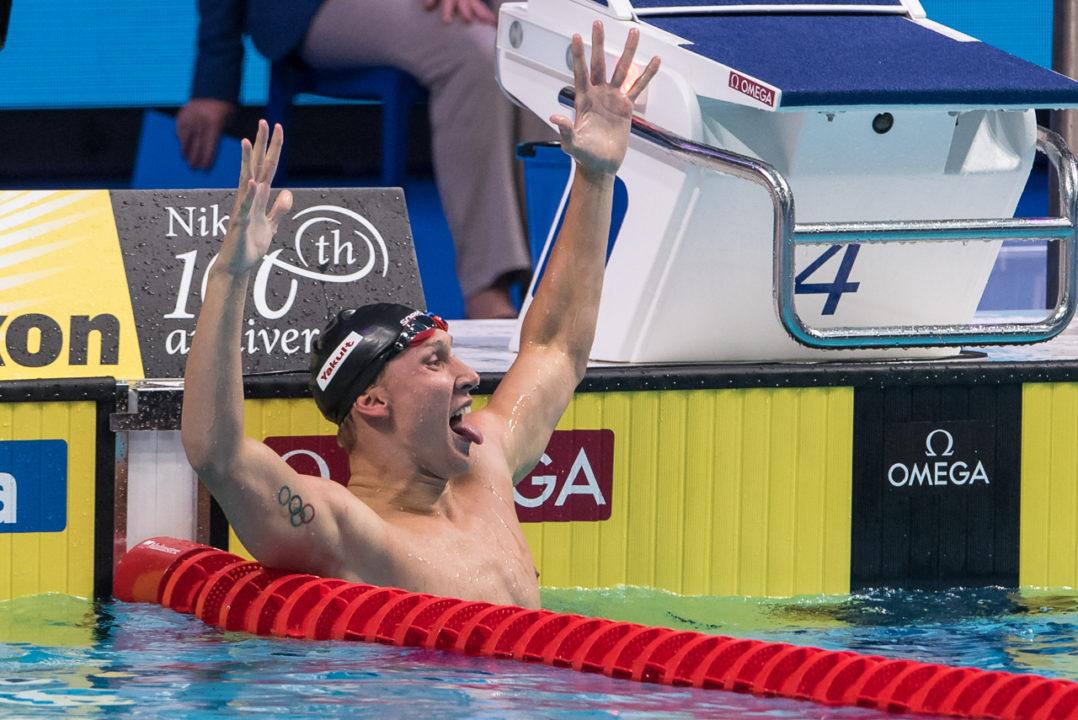 The USA has had a swimmer atop the podium of the 200 IM at every major long course swimming championship since 2002, save the 2014 Pan Pacs, where a U.S. swimmer tied for the fastest time, albeit out of the B-final.  While the now-retired Michael Phelps was responsible for much of that success, the US men still have Ryan Lochte and Chase Kalisz, who have combined for the last five World Championships gold medals in this event, with Lochte having taken each world title 2009-2015, and Kalisz in 2017.

Kalisz, Phelps’ protégé, is the 24 year-old reigning World Championships gold medalist and 7th-faster performer ever.  He comes in with the fastest time this season, a 1:57.50 from the Austin PSS back in January.  We’re guessing he won’t be quite fully tapered here, as he’s a shoo-in to make the Pan Pacs team in at least this event and the 400 IM (and quite possibly the 200 fly too), but he has enough of a sizable margin on the rest of the field that he should still win.

The only US swimmer still competing who has been faster than Kalisz is the 33 year-old Lochte, who just happens to be the world record holder in the event. He was out of competition for a year after the Rio gas station incident, but has been looking strong this year while training once again under long-time coach Gregg Troy, and currently has the 2nd-fastest time in the US this season.  Assuming no injury and the normal massive Florida taper, he should be near the top of the field here.

Four of the five fastest times this season after Kalisz and Lochte belong to a cluster of former NCAA stars who also bring some solid international experience. The fastest lifetime and season bests in the bunch belong to Josh Prenot, who just missed making Worlds last summer in this event.  He’s followed closely by Will Licon, Gunnar Bentz and Jay Litherland. All except Licon were on the 2016 Rio squad, albeit in different events, and all three of those have also medaled in an IM event at the Pan American Games or the World University Games.

Working our way down the top times from this season, we come to 19 year-old Michael Andrew. This is probably his 3rd-best (Olympic) event, and he qualified for finals at Olympic Trials in it two years ago (although he opted to scratch).  But he probably has a better shot of making the Pan Pacs team in the 50 free, which comes shortly after the 200 IM here, so it’s doubtful if we’ll even see him swim it.

Rising Cal senior Andrew Seliskar had a strong meet earlier this month at the Santa Clara PSS. While he’s made the A-final at NCAAs in the yards version of this event each of the past three years, his lifetime time best in long course is still a 1:59.84 from way back in 2013, before his junior year of high school. Still, he looks to be in great form this season, and is a great bet to make one of the various international teams that will be selected on the basis of this meet.

Last year, Abrahm DeVine shocked quite a few people by making the USA’s World Champs team, becoming the 5th-fastest US swimmer ever in the event. He’s had a quiet long course season, and hasn’t actually competed in the 200 IM yet.  However, his 400 IM at Santa Clara was just a hair faster than his time from the same meet last year, he’s the fastest man in the field except Lochte and Kalisz, and he had a very solid NCAA season, including a victory in the 400 IM.

As always, there’s a few other names to keep an eye on. This isn’t the primary event for either Ian Finnerty or John Shebat, but the former had a breakout year at NCAAs, including an American record in the 100 yard breaststroke, while the latter could sit as high as 10th on the psych sheet, depending on who all enters. Among current or recently-graduated high schoolers, Carson Foster recorded a personal best at the Austin PSS and sees this event as his best one, Kieran Smith looks to be a future IM star, and you’ve got to wonder what Reece Whitley could pop if he decided to swim this. He made huge progress during his senior high school season in ‘not breaststroke.’

Note: Lochte was initially picked to place 2nd. However, on July 23rd he was suspended for 14 months after using an IV in May.

What’s that? You’ve made it this far and you’re surprised/annoyed we haven’t even mentioned a certain swimmer who obliterated the American Record in the yards version of this event at a meet for which he wasn’t even fully tapered?

Snap out of it. The 200 IM is shortly before the 50 free. And even if he does decide to swim it, he’s not going to set the world record.

Didn’t we learn from 2015 Worlds that choosing the team a year in advance really doesn’t work out well? Especially since the rest of the world does trials meets a month or so before?

if dressel swims he wins, but we need his freestyle more…

That s a little tougher than the 50 Free – 100 Fly mixed relay triple from worlds.

Seliskar seems to think this is one of his best events according to a recent interview, expecting a 1.57 low from him placing 4th overall American

U can’t count out Kalisz …..at this point as u can’t see the future ….

Strictly speaking you can’t see the future at any other point either.

Why would Kalisz be slower than last yea?

I reckon we’ll see the opposite: Dressel in the 200 IM at nationals and not pan pacs. He will probably be half rested and be good for a 1:54 high/ 1:55 low. If he swims it full taper he’ll go a WR but I don’t think he will this year. Hopefully I’m wrong I’d love to see a 1:53 not fully tapered to keep us wondering all year about if a 1:51 is possible.

I agree that he’s more likely to swim it at Nats and not Pan Pacs than vice versa.

Not sure when we will see a Dressel 200 IM LC, but my $ is on him swimming the 100 breast at Nationals–that fits into his schedule perfectly–an off day otherwise.

I don’t see his focus been 50free, two years out I feel this year 200im is his main focus , so at least he knows moving forward.
He can win 50/100free and 100fly at Olympics if he swam them individually and didn’t mix, this year about finding the best events.

I think he gets the rest on day 4 of nationals – maybe a prelims breaststroke, then goes for the 2 IM / 50 Fr double on the last day. Assuming he’s already made Pan Pacs, why not?

I agree with Robert Gibbs – 200 IM at Pan Pacs is sandwiched between 100 fly and 4×100 FR. If he wants to swim 2 IM this summer, it will be at nationals. Dressel will not be as good at 200 IM in long course as is in short course, but is still dangerous.

I think it’s very unlikely that Lochte will beat Kalisz, but I guess we’ll have to wait and see

Yeah he was really happy if i remember

He doesn’t look very happy at 4 minutes in the video.
https://www.youtube.com/watch?v=ShpZzB7mKXc