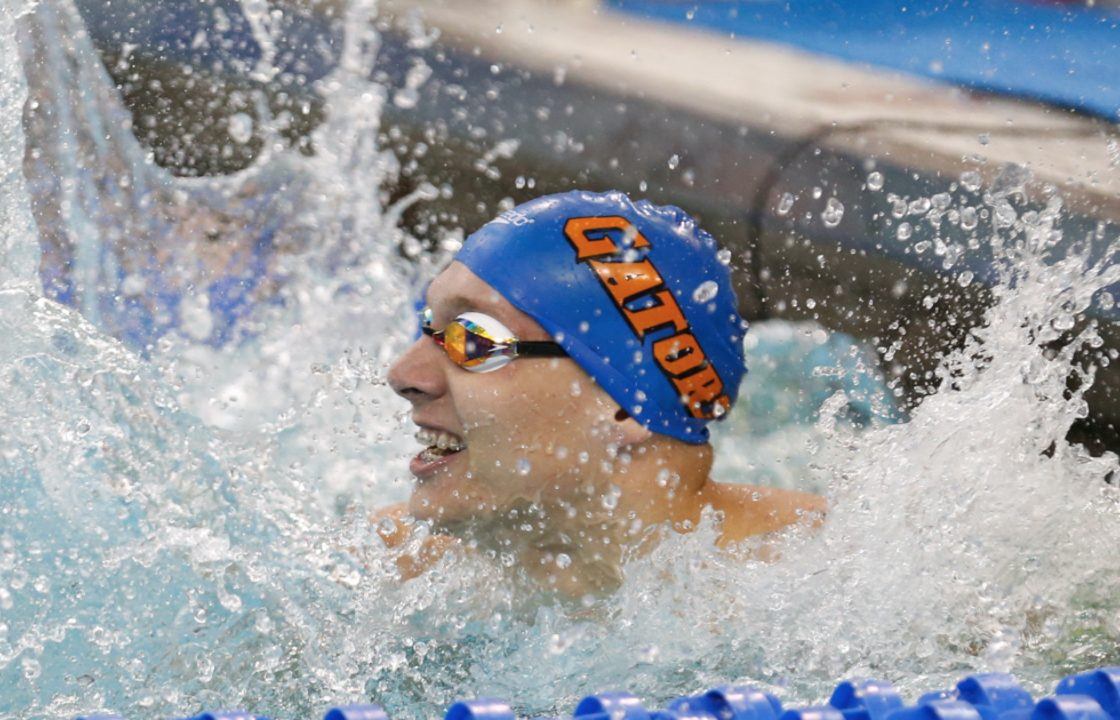 We got to witness history tonight not once, but twice, tonight, as Florida senior Caeleb Dressel dropped two sub-18 flat start 50 frees.  First he went 17.81 leading off Florida’s victorious 200 free relay, then he dropped almost another two-tenths off his own record to win the individual 50 free.

The only thing better than witnessing history is witnessing it twice.

Spectators of tonight’s meet got to see perhaps the most impressive night of short course swimming in world history, as Florida’s Caeleb Dressel re-lowered his own American record, going 17.63 to become the first man ever under 18 seconds in a flat start 50 free – twice in one day.

Dressel’s 17.63 takes two tenths off his already-insane 17.81 leading off the relay earlier and only cements what swimming fans have been thinking since at least this meet last year – Dressel is a generational talent and the greatest yards swimmer in history.

NC State’s Ryan Held was 18.64, still one of the fastest times in history and was a full second behind. Minnesota’s Bowe Becker thrilled the home crowd with an 18.90 for bronze, and six of the top 8 broke 19 seconds.

Cal’s Pawel Sendyk was 18.94 and Auburn’s’ Zach Apple tied with Ryan Hoffer of Cal for fifth at 18.97. The only two above 19 in the heat were Robert Howard and Blake Pieroni.

NC State remains in the lead narrowly – they are 5 points up on Florida and 8.5 ahead of Cal. Texas is now 22 points back and Stanford is 41 back in 5th place.

i watched it, never gonna watch that again

it’s like the video from the ring, we’re all gonna die in a week.

*thinks about putting away my ice cream*

Did he switch suits between the relay and the individual event in the stall?

He got ’em from the same guy that did the wardrobe from 2006’s best film, “Ultraviolet.”

No one else remembers Ultraviolet? Just me? Ho…hokay.

i remember that movie, great fx.

He left his cape in the locker room.

I don’t see it from this angle, is this the same Mizuno he has had before in blue?