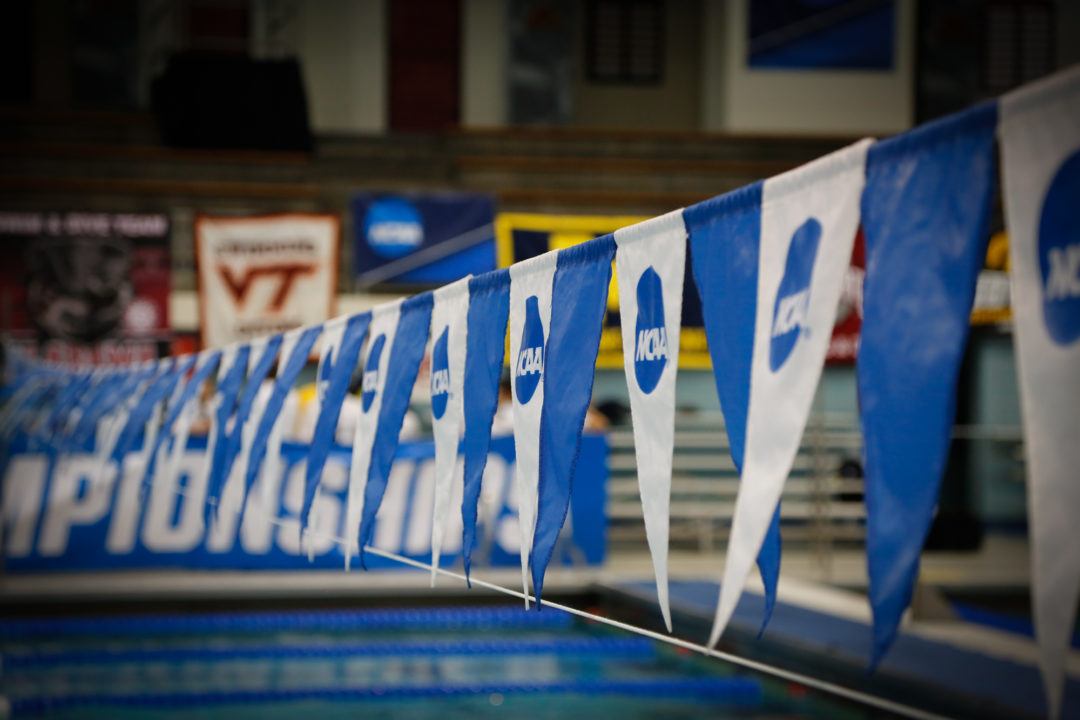 Cal led the way this morning with 6 individuals qualifying for tonight's A final and 4 individuals in B finals. Texas were next with 5 up and 2 down Current photo via Tim Binning/TheSwimPictures.com

***UPDATE The Tables below have been updated to include diving prelims. The article text is only up to date though the relay***

Cal led the way this morning with 6 individuals qualifying for tonight’s A final and 4 individuals in B finals. Texas were next with 5 up and 2 down individually followed by Indiana with 5 up 1 down, USC with 4 up 1 down, NC State with 3 up 2 down, and Florida with 3 up 1 down. All five contenders put their 200 medley relay in the final.

The projected scores after tonight (before diving has concluded) remain extremely tight between the top 3 with 2 more teams still in striking distance. With prelims points plus the real score after yesterday Cal lead with 281.5, Indiana are 2nd with 280, followed by Texas with 274.5, NC State with 243.5, and Florida with 239.

The biggest gainers vs the scored psych sheet were USC who picked up 55 points, Cal who added 39, Stanford who added 37.5, and Texas who added 36.5. The biggest drop off came from Grand Canyon who dropped 18 points. Minnesota, Ohio St, and Texas A&M each dropped 17 points.

The below does not include diving as it has not concluded yet. Prelims scores are subject to change tonight, but they give us a good idea of where things stand headed into the night session.

lot of enthusiasm for the fourth-place team

When was the last time it was this close between more than 2 teams?

Also, have you swimheads ever remember being so excited for diving prelims to end so you can see who picks up those much needed points?

The diving is a huge part here, definitely! Texas has 2 good ones that might negate Cal’s advantage in numbers, and Indiana’s 3 good divers plus the fact that out of 7 swims today they only had 1 not score and 1 B final… NC St going only 3/2 with no divers is really going to put them at a disadvantage.

State has a diver, James Brady. His strongest dives are 3mtr and platform. (today and tomorrow)

If I remember correctly, Hixon, Indiana’s best diver, is a transfer from Texas. That would be a story if he were to be the reason why Indiana dethrones UT.

You are correct. Won the 1M and 3M as a freshman for Texas. That might be one of the biggest transfers ever in mens S&D

And Indiana and Texas’ll probably be the teams that add the most from diving, yes? Sorta getting a little separation tonight, though I don’t know how NC State and Florida’s Saturday swims compare to the top 3.

I think NC Sate’s strongest events, the 100 Free and the 400 FR, will help.
They also have a pretty solid Sophomore diver coming onto the scene in the Platform and 3mtr diving

3
-1
Reply
JP input is too short
Reply to  Rafael

Plus 3 100 free guys that all could score – granted, probably not 3 A finals like NC State could perhaps do.

This is still Cal’s to lose IMO. They have the numbers and are swimming well.

Hmm, so Florida seems most likely to bow out. But the rest…damn.

THIS IS SO FUN YOU GUYS.

Florida is hurt really badly by Rooney and Taylor not being anywhere near where they have been.