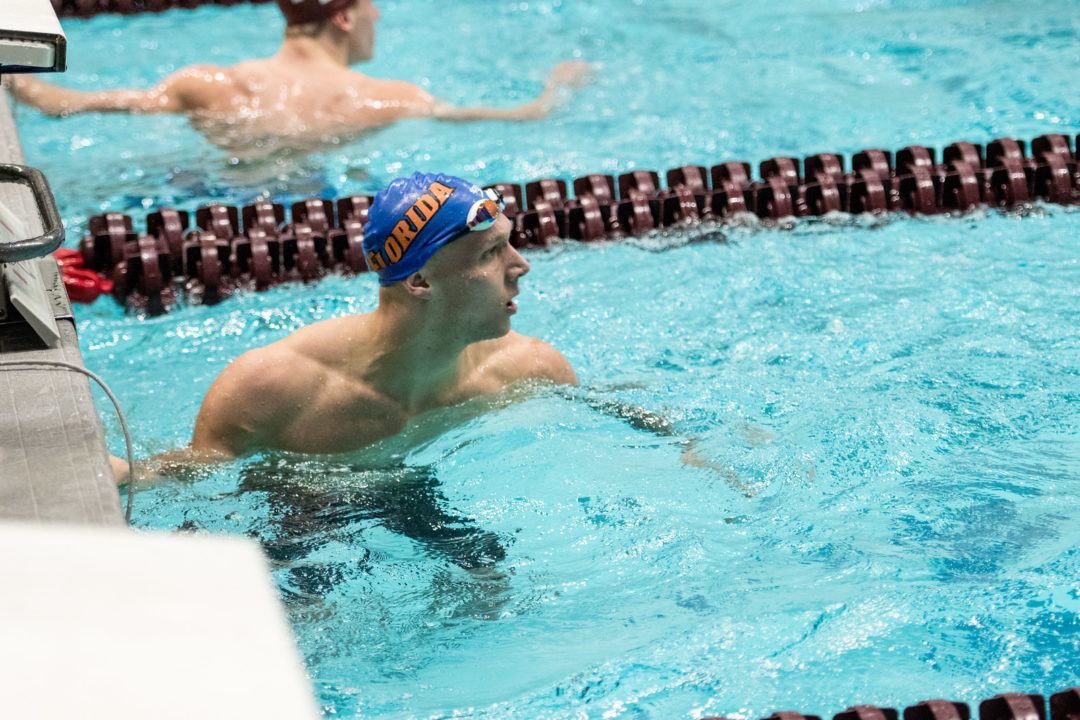 One of the big questions after Caeleb Dressel's outstanding showing at the SEC meet surrounds his NCAA schedule.  Current photo via Thomas Campbell

The 2018 SEC Championships are in the books, with the Florida men and Texas A&M women successfully defending their SEC titles. There were a few swimmers who really stood out at this year’s championships, including Florida’s Caeleb Dressel, Auburn’s Hugo Gonzalez, Texas A&M’s Sydney Pickrem, and Tennessee’s Erika Brown.

The following is the list of awards handed out after the conclusion of last night’s session:

Here are a few interesting tidbits from this year’s meet:

One of the big questions after Caeleb Dressel‘s outstanding showing at the SEC meet surrounds his NCAA schedule. Typically, his NCAA schedule has included the 50 free, 100 free, and 100 fly, but Dressel has some other potential options this time around. At SECs, he blew David Nolan’s former American Record out of the water with a 1:38.13 in the 200 IM. Swimming the 200 IM, however, would likely mean giving up the 50 free, and his only chance to complete an NCAA 4-peat.

There’s also the question of whether he’ll choose to swim the 100 fly or the 100 breast. In the 100 fly, he’d have another head-to-head matchup with Texas’ Joseph Schooling. In the 100 breast, however, he’d have a chance to become the first man to break 50 seconds after putting up an American Record of 50.03 at SECs. He could always double up on one of the earlier days and skip out on the 100 free, going for the record on the relay leadoff instead, but that doesn’t seem as likely given he’ll have his hands full even with one individual race per day since he plays such an important role on the relays.

my guess is probably fast

I think Dressel just did 200 IM & 100 Breast @ SECs because he knew what he was capable of. He still knows his primary events and the events he’s known for internationally are 50/100 free, and 100 Fly. 100 breast would be cool to see him go sub 50, but he is a competitor, and I wouldn’t be surprised if he wanted to stick with the 100 fly and race Schooling and defend his NCAA record.

I know this is an article about Dressel and what he’s going to swim, but after looking at the standings from LSU, what the heck happened to them?! Didnt they used to be a top 25 program? (or has that not been for a while and I’m just showing my age…)

The question is: can he beat Manaudou at European handball?

Wouldn’t even be surprised

I predict that, just to toy with the world, he skips the 100 free, then splits a 39.40 with a perfect .00 R/T to anchor the 400 free relay, leaving everyone to ponder and debate for the rest of time whether or not it would have been a sub-40 flat start swim.

He then will go to Indianapolis and qualify on pole for the Indy 500.

OK, this is not realistic for the UF Team, but here’s the dream scenario from a swim fan (or swim geek):
CD would individually swim 2IM, 100 fly and 100 breast. Then leadoff all three free relays. We could realistically see SIX American Records in one meet! As good as his IM/breast swims were, I have to believe there’s more in the tank based on how he’s handled a double-taper with Trials/Worlds — and he was surely more rested for trials last summer b/c you can’t afford to miss the team. I think 1:37 and :49 are almost a certainty. We haven’t seen his fast yards fly since last March (didn’t even swim it in Fall Invite). We KNOW… Read more »

That’s my wish list. But I will settle for just letting him lead off the 800 FR. ** I KNOW it’s not best for UF** They have 4 guys already that can probably split 1:31s. They might be able to win the 800 without him. And he’s so valuable on the sprint relays. But . . . if they are not a true title contender and are likely to slot in 3rd behind TX/CAL . . . then why not just go all in on the 800FR to get a win and make history? CD’s fitness is obviously off the charts based on his 200IM. We know his free speed is there. I think he goes 1:29+ and the relay… Read more »

If Florida wants to maximize their points at NCAAs, he should swim the 50 free, 100 breast, and 100 free. Would love to swim him swim the 200 im again, but Florida as a team already has amazing imers to score big points in szaranek and switkowski as well as switkowski in the 100 fly. What they lack is a true 50 guy other than dressel and a 100 breastroker to score points. To be honest though, winning points is winning points so what do I know. Best of luck to Troy and dressel to figure that one out!

Agreed. Caeleb and Jan in the 100 fly just pushes Jan down a place in the 100 fly which means less points for Florida. When their women won NCAAs, it was by 2.5 points. Caeleb can win the 100 breast outright and not affect team points. It’s the smart move. Of course, this all assumes Jan swims the 100 fly at all. He’s consistently top 5 in the 200 free at NCs and already went a 1:33 at a dual meet this year.

The thing is that UF got two potential scorers for 2 free with Baqlah and Rooney . And recent trend of 2 free at NCAA’S suggests that it will take atleast 1.31 to A finaled and 1.32 to score.
But for 100 fly, besides Schooling , Held there are no other competitors who have broken 45 barrier. So Jan has fair chance to get into top 5 there.

Don’t disagree, but from my perspective as a fan, there’s no race i’m looking forward to more than the 100 fly and a repeat of Dressel vs Schooling. Not to mention, If Dressel goes for the 100 BR, the Texas bluster will be unbearable… that Dressel was ducking Schooling.