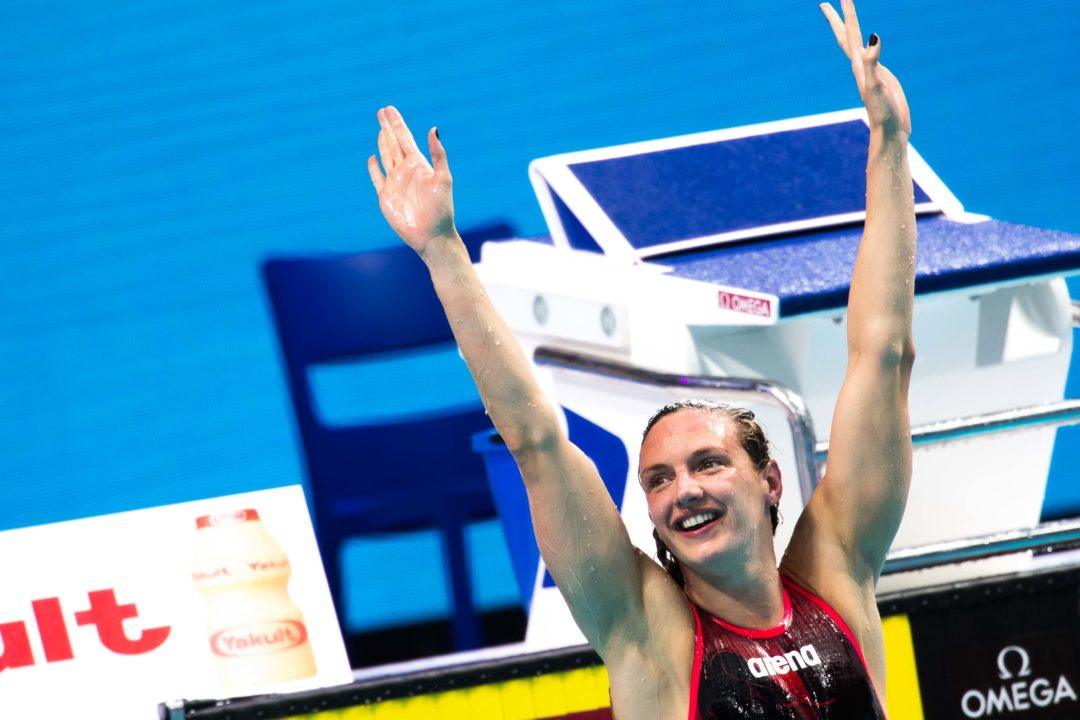 Katinka Hosszu will look to continue her reign in the women's medley events in Hangzhou. Archive photo via Mike Lewis/Ola Vista Photography

After winning the 100 IM in Doha and then the 100 and 200 in Istanbul, Hungarian superstar Katinka Hosszu finally pulled off the medley trifecta at the 2016 Short Course World Championships in Windsor, becoming the first woman and second swimmer to ever do so. Ryan Lochte won all three IM events at both the 2008 and 2010 Championships, and Australian Matthew Dunn swept the 200 and 400 in both 1995 and 1997 before the 100 was contested.

Hosszu has a clear path to do it again in Hangzhou. Sarah Sjostrom, the swimmer who has been closest to beating Hosszu in any of three events the year (in the 100), is not attending, and Hosszu’s busy schedule may be her only real hurdle. However, she is only entered in eight after swimming eleven in Windsor, so she should be fine.

Hosszu’s dominance in the 100 IM is remarkable, as she owns the 13 fastest swims in history and 22 of the top-25. This year her fastest swim has been 57.05, and only Sjostrom has joined her under 58.

That gives her a sizeable gap over the field in Hangzhou. Kathleen Baker, the 2017 NCAA champion in the 200 IM, had a breakout performance this past summer in the long course 200 IM, and has continued her medley emergence this short course season with three 58-second swims. She tied the American Record of 58.02 in early October, and looks poised to join the elusive sub-58 club which only nine women currently are in.

In addition to Hosszu, there are three others in the field who have gotten under 58. Emily Seebohm of Australia is the 3rd fastest swimmer in the field based on 2018 performances with her 58.33, and she comes in looking for a 3rd straight medal in the event after winning bronze in 2014 and silver in 2016 (where she broke 58 in 57.97).

Jamaican Alia Atkinson has been just behind Seebohm at the last two Championships with a 4th in Doha and a bronze in Windsor (and also a 4th in 2012), and she’s been as fast as 57.84 from the Paris-Chartres World Cup stop in 2016.

The other swimmer in the field who has stopped the clock in 57 seconds is Lithuanian Ruta Meilutyte, who actually beat Hosszu head-to-head at the 2013 European Championships in a time of 57.68. The 2012 Olympic champion in the 100 breast hasn’t competed in the event yet this year, and hasn’t broken a minute since 2014, so she’s a pretty big dark horse.

Others in the mix to medal here will be Japan’s Runa Imai, Russia’s Maria Kameneva and the Netherlands’ Femke Heemskerk who have all been 58 this year. Baker’s American teammate Melanie Margalis was a finalist in 2014 and is right there with a season-best of 59.05.

Hosszu is the fastest swimmer in the history of the SCM 200 IM by close to three seconds, and though she was four seconds off her long course world record in the summer, she’s back on top form again as her 2:04.13 swim in October was her fastest at a World Cup stop since 2014.

Margalis went head-to-head with Hosszu in that World Cup race in Budapest, finishing just half a second back in 2:04.65 to put her 5th all-time and just .05 outside of 2nd (it was also the fastest non-Hosszu swim since 2012). That makes her the big favorite for silver, and her teammate Baker is poised for a big drop and a charge for the podium as well. She’s only ranked 43rd in the world for 2018 due to only contesting one prelim swim, but her LCM and SCY bests convert to 2:05.1 and 2:03.4 respectively, putting her right in that 2:04 range. They have a great chance to put two Americans on the podium for a second consecutive championship after Ella Eastin and Madisyn Cox did so in 2016.

Hosszu and Margalis have separated themselves from the rest of the world this year with their 2:04s. Seebohm is the next fastest swimmer who’s competing in Hangzhou in 2:06.37, and then Ye Shiwen, Ilaria Cusinato, Rika Omoto and Zhou Min have all been 2:07.

The short course 400 is the lone medley event in which Hosszu isn’t the current world record holder, and you know she’ll be gunning for Mireia Belmonte‘s historical mark of 4:18.94. This event falls on the first day of competition, which gives her the best possible chance at it, and unlike Windsor, she won’t have the 200 free final shortly beforehand.

Yui Ohashi of Japan pushed Hosszu to a very quick in-season 4:21.91 at the Tokyo World Cup stop in November, and with Ohashi (who went 4:22.73) not competing in Hangzhou, Hosszu sits over six seconds clear of the next fastest swimmer in the field.

The battle for podium spots behind Hosszu looks to come down between those five, and Americans Margalis and Leah Smith. While Margalis has never swum the event SCM and Smith only has twice (4:32.84 PB from October), both have shown a strong ability to perform in short course and are certainly contenders for the silver and bronze medals. Both are coming off going 4:35 during the long course season.

Wonder how Ye Shiwen will swim. I feel like she’ll medal somehow!?

By sitting out a year.

Will be exciting to see if she is in 400 IM WR breaking form again. Sure it is a big goal of hers!