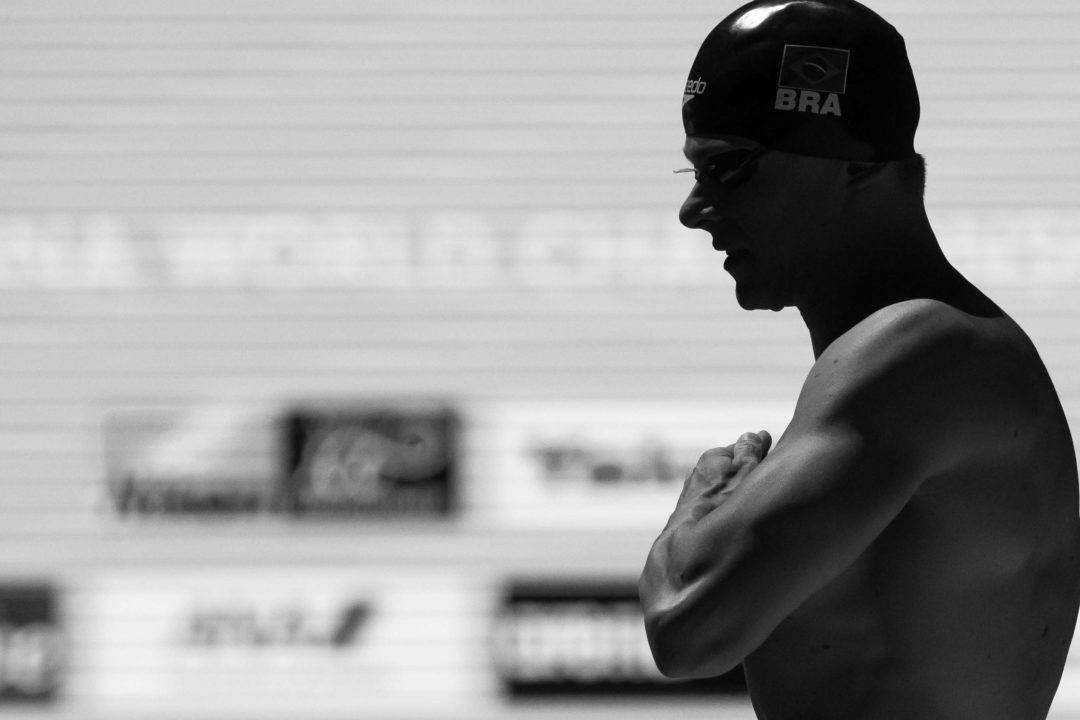 Cesar Cielo hasn't made up his mind on whether or not he'll retire after competing in Hangzhou. Archive photo via Mike Lewis/Ola Vista Photography

There was plenty of talk that the recent Short Course World Championships in Hangzhou would be the final competition for Brazilian legend Cesar Cielo. Though he hadn’t explicitly come out and said he would hang up the suit after the meet, he had hinted at it.

Now 31 years old, it’s been about four years since Cielo was swimming at the top of his game. After pulling out of the 2015 World Championships mid-competition due to a nagging shoulder injury, he missed qualifying for his home Olympic Games in 2016.

However, he proved he’s still competitive with the best in the world at the 2017 World Championships, making the final in the 50 free and winning silver on Brazil’s 4×100 free relay, and he added a pair of bronze medals over the last week in Hangzhou.

Moving forward, he’s going to give himself some time before he makes a decision on retirement.

In an interview with GloboEsporte.com, Cielo said in a translated quote (on looming retirement): “It’s the most difficult period of my career, in that respect. Imagine my life outside the pool daily. Now it’s even hard to talk. I do not know what weekend is since I was 13 because I work out from Monday to Saturday. The whole family is together because of swimming. The sport is part of the people. It’s hard to imagine setting this aside”.

“I do not want to be dependent on race or talent alone, I want to work the way I believe, the way I’ve done it before. So I’ll see next year if I go back to training or if this one, in fact, was my last World Championships”.

“I’m satisfied with what I won this year. It was a tough year because the World (Championship) was only in December. So when we started the season in January I knew it would be a long year to get here. I am satisfied. Now I want to give my head time, I want to see if I miss the pool. By the middle of January, if I do not miss it, or if I feel it, that’s when I’ll actually define what I’m going to do in relation to the high-performance sport in my life. But regardless of what I decide there, in relation to the result I have been feeling more satisfied. For a long time I fought with my career, I fought with the pool, ups and downs in this relationship”, said Cielo.

If Cielo has in fact raced in his last major competition, he retires as the fastest man in history in both the 50 and 100 freestyle (LCM). He set both records in 2009 during the super-suit era, where records fell left and right due to advancements made in suit technology. The tech suits were banned at the beginning of 2010, and Cielo himself called for all of the records done in the suits to be scrapped.

His rise to the top came rapidly. In 2007 he really burst onto the scene, placing 6th and 4th respectively in the 50 and 100 freestyles at the 2007 World Championships in Melbourne, and then followed up with three gold medals at the Pan Am Games.

2008 was really his coming out party, as he tied American legend Jason Lezak for bronze in the 100 free at the Olympic Games in Beijing, and then went on to win gold in the 50 free in an Olympic Record time of 21.30 (just .02 off the existing world record).

In addition to his three Olympic medals, he (potentially) retires with seven LC World Championship medals, six of them gold, and 12 SC World medals. His two medals won in Hangzhou put him past Gustavo Borges for the most SC World medals ever won by a Brazilian, as prior to the meet they were tied with ten. Between the Olympics, both World Championships, Pan Ams and Pan Pacs, Cielo has 33 medals, two shy of Borges’ 35 (using WUGs for Borges instead of Pan Pacs).

You can find full comments from Cielo on GloboEsporte.com here.

I thought he he had retired back in 2014

Strange that people would downvote this. Cielo has a notorious history of using Performance Enhancing Drugs. We can not accept that bad behavior in the sport.

Honestly, the fact that the records were not taken down grinds my gears, but it at least provides motivation to swimmers like Dressel and Ben Proud.

Agreed. We can’t just overlook doping because someone has a long career and they are retiring.

Well, we apparently overlooked Cameron VDB’s extra dolphin kick to cheat his way to Olympic gold. He was even SwimSwam’s male swimmer of the meet.

I feel the same way about Cameron VDB

VDB didn’t fail any drug tests (I don’t think)? Yea he “cheated” but frankly I don’t care about that because the entire field did that/knew others were doing it. Does that make it right? Maybe not, but that shouldn’t be an asterisk on his career.

Why is there a difference between doping and using illegal techniques to win? Both give an unfair advantage.

I understand it’s common, but cheating is cheating and he was utterly unrepentant when confronted, so he’ll always stick out in my head alongside Kitajima and Cody Miller. Yes, others have done it and continue to do it (Hosszu during a WR IM a couple years ago, iirc) and it should be an asterisk on all of them.

I blame the officials. They suck at doing their job, so breastrokers do it because someone else will do it.

CD7GT – I agree that it comes down to officiating, but I don’t blame the officials. I can see how it would be hard to see that extra movement when the swimmer is relatively far away, there are ripples on the surface, and all the chaos of an international final is going on. I think the bigger problem is that this rule is extremely hard to police effectively and consistently based on the current constraints of the rules (i.e. video review).

The way I see it, no breaststroke or IM world record should be ratified unless the facility has underwater cameras mounted to watch the turns. After the race, results are not final until every turn is reviewed and verified… Read more »

But we see it on the underwater videos. No reason why those can’t be shown as evidence

Exactly, but my understanding of FINA rules is that this is not allowed to be used as the basis for a disqualification. It’s just a dumb rule.

I remember the Hosszu one as it was incredibly blatant. I was glad to see that record broken and in fact it should never have been allowed to stand in the first place. Same with VDB record.

Yeah, I mean I don’t think she did it when she obliterated the 400 IM record in Rio (and in long course it’s not like two dolphin kicks would have changed the outcome) but regardless, she’s still clearly the best four-stroke female swimmer in the world (and possibly history). I like Hosszu, from interviews I’ve seen, from the way she is never afraid of challenges or tough doubles/triples/n-ples, and how she isn’t afraid to take on her federation and FINA in defense of the swimmers, so it’s disappointing to have to call her out like that but she’s a very high profile example of this problem.

That’s a little absurd to compare performance enhancing drugs to two extra dolphin kicks. As I said, pretty sure everyone in that final did it so he wasn’t gaining an unfair advantage. But it’s not worth arguing morals here.

Guess we’ll have to agree to disagree. In either case, the person is intentionally breaking the rules in order to get a competitive edge over his or her competitors. And as far as “everyone’s doing it so it’s fair,” the same could be said for doping.

This anonymous survey showed that over half of the athletes at this competition admitted to doping at some point (https://www.theguardian.com/sport/2017/aug/29/sport-doping-study-revealing-wider-usage-published-after-scandalous-delay) and while it wasn’t performed on swimmers, why should we assume it’s any different? Other anonymous surveys have shown similar results: doping in elite sports is way more prevalent than testing results show. If anything, many athletes aren’t going to be honest, even on an… Read more »

I have always argues that once someone has announced they are considering retirement, they have already made up their mind