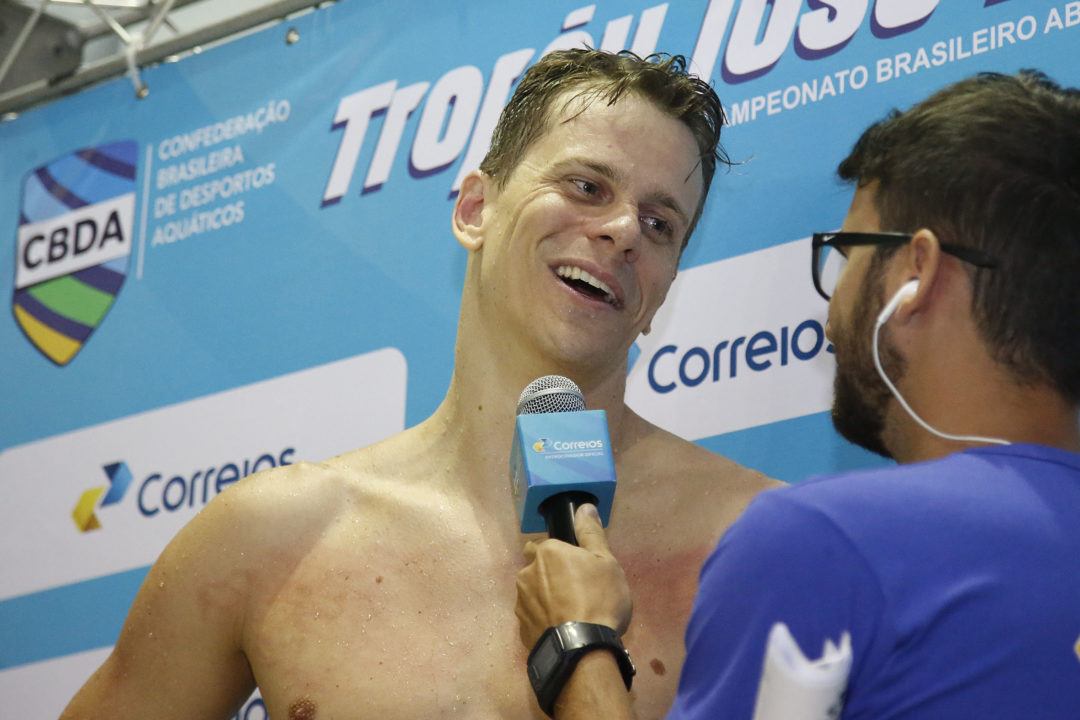 World Record holder Cesar Cielo didn't overtly announce a retirement, but he made comments that strongly indicated that Sunday was his last day of racing on Brazilian soil. Current photo via Satiro Sodre/SS Press

On Sunday, the final day of the 2018 Jose Finkel Trophy in Sao Paulo, Pinheiros finalized the team championship, while Caio Pumputis won 2 events and broke a South American Record.

Pumpitus’ first win of the finals session came in the first men’s event: the 200 meter breaststroke, where he swam a 2:03.27 to clear the standard for Short Course Worlds and win by three-and-a-half seconds. The 19-year old took most of that margin in the first 100 meters of the race.

Later in the evening, in the last individual event of the meet, Pumputis won again, this time in the 100 IM. He swam a 51.88, which beat out Vini Lanza, winner of the 200 IM, by .34 seconds. That was another swim for Pumputis under the qualifying standard.

In the prelims of that 100 IM, Pumputis broke the Brazilian and South American Records in the event by swimming 51.88. The old record of 52.20 was set by Henrique Rodrigues in 2014.

He wasn’t the only swimmer to add their name to the Brazilian roster for Short Course Worlds on Sunday, however. The biggest news was the clocking of a 20.98 by 31-year old sprinting legend Cesar Cielo, which was under the standard to qualify for Hangzhou. Cielo, who skipped Pan Pacs to focus on Short Course Worlds, didn’t overtly announce his pending retirement after the race, but he did give strong overtones that this was his last 50 free in Brazil, saying that “now he’s only watching by YouTube.”

Guido swam a 49,77 opening the relay.. almost matched his PB from 2 days ago

All these sprinters retiring to avoid MA. 🤦‍♂️

If I have to hear about scy one more time. He’s a pro now long course isn’t all that matters