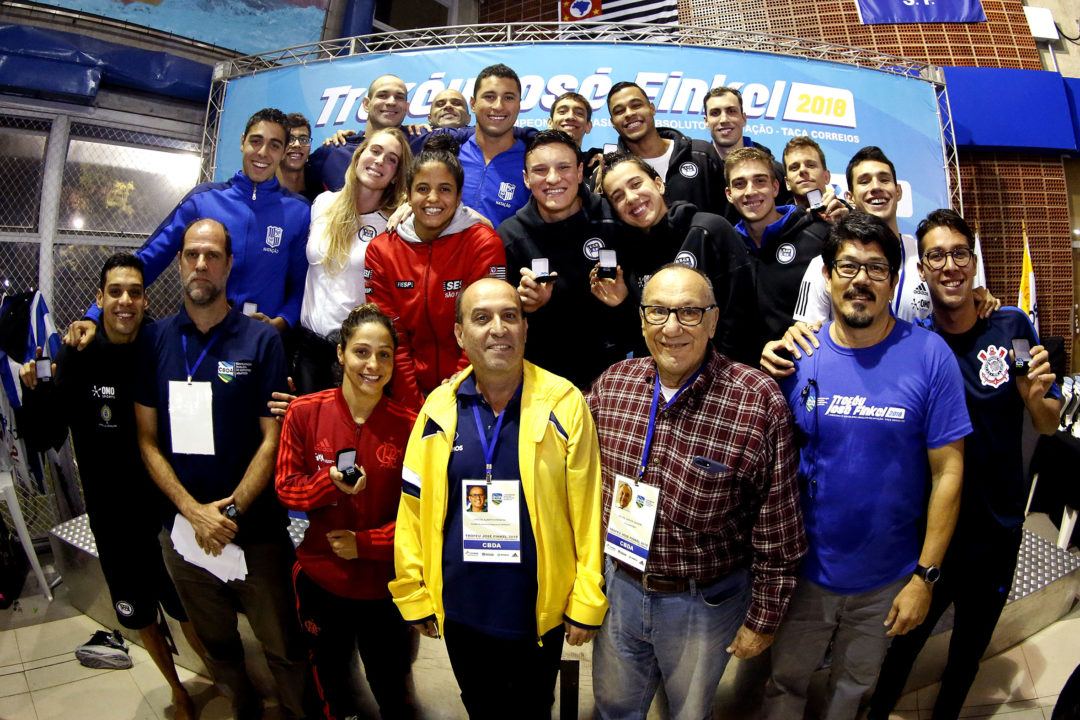 There was fear among the Brazilian faithful that, with time standards in many cases set below the South American Records, not many would achieve them, and the team quota of 20 would be met mostly by World Rank. On the contrary, the swimmers rose to the challenge, and 11 out of the 20 awarded spots were given to athletes who had hit the predetermined numbers, which in many cases included multiple swims under the marks.

Also making the roster was Cesar Cielo, for what could be his last competitive meet after he gave post-race interviews saying that he would be watching future Brazilian championships on YouTube.

The problem with developing the women’s team continues in Brazil – 16 of the 20 qualified athletes are men. Etiene Medeiros, just a few months off shoulder surgery, and Larissa Oliveira, who broke South American Records in the 100 and 200 freestyles, both hit time standards, while Manauella Lyrio and Daiene Dias earned their way onto the roster by World Ranking. Jhennifer Conceicao, who broke the Brazilian and South American Records in the 100 breaststroke, didn’t make the team.

The roster includes 13 athletes representing Pinheiros, the team that won the title at the meet. Only Lanza represented Minas Tenis, though he trains in the US at Indiana University.

At least 3 members of the team will have to interrupt their collegiate seasons to race at Short Course Worlds. Lanza (Indiana), Pumputis (Georgia Tech), and Brandonn Almeida (South Carolina), are all expected to compete in the SEC this season.

In all, after years of chaos in the organization that includes loss of major sponsors and the arrest of long-time CEO, the meet was a stabilizer for the country, with 11 South American Records, another 3 Brazilian Records, and 26 Championship Records.

It seems Costa won´t go for World.. he said on an interview he will focus on improving for next year World and Pan Am Games, if that keeps as True Giovanna Diamante will go based on 100 fly points.

Congratulations to the entire squad. Curious as to why Jhennifer Conceicao, “who broke the Brazilian and South American Records in the 100 breaststroke”, didn’t make the team. Anyone? TYVM

She did not hit the specified Qualitying time and her Fina Points were not enough.

And as always.. a somehow weak women team and a men team that seems to be getting stronger..
4×100 relay might be even better next years if Santana returns to form and with Breno rise. (He was 5th at Trials on 100 free)
Also Brazil might for the first time ever create a good 4×200 relay, Altamir and Scheffer went well on the first 2 legs on Pan Pacs, Breno is rising (He was 3rd on Trials and split 1:46 there), just need a 4th leg for Long Course.

The sad part is our best 200 guy(until the rise of Scheffer), De Lucca, is on the downside of his swimming. At his best, I would say Brazil would have a top 5 4x200free with those guys.

We may have some names for 2019.. some guys who rose recently such as Sartori and Lucas Peixoto and someone I Never head that was this Mattheus Massami who was 1:49 low LCM on Maria Lenk (Did not know this guy) and dropped more than 2 seconds on SCM now on Finkel.