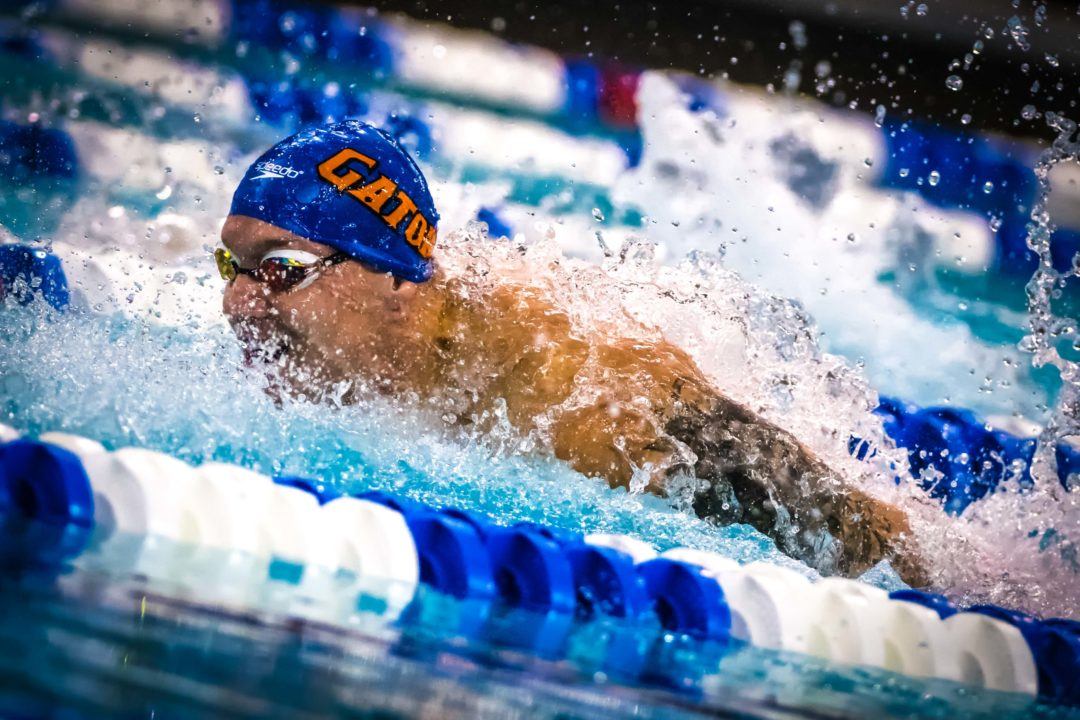 Caeleb Dressel and Ryan Lochte will be among the swimmers make their TYR Pro Series debuts in Santa Clara. Archive photo via Mike Lewis/Ola Vista Photography

Simone is not only a master at sprinting, but also at having great hair while she’s doing it. She let us in on her secret to maintaining it during swim meets

Tonight, Katie Ledecky will try to better her season-best 3:57.94 in the 400 free from May at the Indy PSS.

The four SwimSquads will go to battle this weekend in Santa Clara, the penultimate TYR Pro Swim Series stop on the circuit. After winning the Indianapolis stop, Team Krayzelburg leads the way by 30 points (358), with Coughlin (328) 2nd and Sandeno (291) 3rd. Team Lezak, who has dealt with backstroker issues the whole way through, is a distant 4th with 249 points.

The Santa Clara stop will arguably be the most stacked TYR Pro Series event yet, with the likes of Caeleb Dressel and Ryan Lochte making their debuts, and nearly all of the big names in action. This looks like the first time none of the teams will have a gaping hole in one spot, with Team Lezak in particular finally getting a reliable backstroker in the lineup in Regan Smith. We’ll also see a return of the stroke 50s to this stop, which benefits some more than others.

Most of Krayzelburg’s picks are basically locks. Katie Ledecky on freestyle, Chase Kalisz in IM and Kelsi Dahlia on fly are slam dunks, and Nic Fink is the only real option on breaststroke.

For backstroke, he can really go either way with Matt Grevers and Olivia Smoliga, and then simply slot the other into the flex position. The only other option to consider is Ryan Lochte, who is coming off an impressive showing at the Mel Zajac meet last week. However, despite the fact that 100 back world record holders Ryan Murphy and Kylie Masse are both in the field to compete with Grevers and Smoliga, they’re safe bets to place top-2 or 3 in the sprints while Lochte is a bit of a wild card in both performance and if he’ll scratch out of some (entered in 7).

Team Coughlin is well taken care of with individual Olympic champions Simone Manuel, Ryan Murphy and Lilly King manning their free, back and breast spots. Tom Shields is the only real choice for fly, and Madisyn Cox is a strong IM selection (though Abrahm DeVine is an option), while Melanie Margalis has a wide array of abilities and is perfect in the flex spot.

Entered in the 200 free, 400 free, 100 breast and 200 IM, Margalis would have to be the favorite in the 200 IM and realistically will be fighting for 2nd in the others with Ledecky and King swimming. After scratching the 200 free final at the last stop in Indy, and facing off against a stacked field there, a runner-up finish in the 100 breast looks to be the best bet of the three.

Though Townley Haas makes an appearance, there’s really no spot for him with Manuel and Margalis on free and flex. He’s not known for being particularly fast in-season anyway.

Team Sandeno has a lot of different options on the table with the emergence of Dressel, along with Leah Smith‘s wide range and Katie McLaughlin‘s recent impressive swims.

Ultimately, Zane Grothe has been dynamite so far in-season, so he’s a safe bet on freestyle. Jacob Pebley and Andrew Wilson are strong picks on back and breast, while fly could really go anywhere between Dressel, McLaughlin and Jack Conger.

We’ve opted to go with Conger,  while Dressel slides into the flex option and Ella Eastin into the IM. There are so many different combinations possible for Dressel, but the 50 fly looks like a safe win and the 50 free is probably his next best bet, though he could realistically win any of the events he’s entered in.

It seems a little crazy leaving out Smith, who was Sandeno’s first round pick, but this team is so stacked right now and she was only okay at the Indy stop.

Regan Smith is a welcome addition to Team Lezak on the backstroke leg, with the 16-year-old seeded 2nd in the 200 and 3rd in the 100 after they struggled to get any points here early in the series.

Even with Dressel in action, Nathan Adrian is as close to a lock as you’ll get on freestyle, and we’re guessing Lezak won’t pass on both Kevin Cordes and Cody Miller for Ian Finnerty on breaststroke (like he did last time) after Finnerty put up zero points in Indianapolis. That breaststroke spot could realistically go to either of those guys or Josh Prenot, but Prenot is a pretty good option for the flex spot so the BR spots edges in Cordes’ favor.

Prenot goes into the flex for the 200 breast and 200 IM, and Jay Litherland is a solid pick for IM. For butterfly, Katie Drabot would’ve been a huge selection after her 2:08 200 in Indy, but she hasn’t entered it here and takes on difficult fields in the mid-distance frees and sprint flys. With that, Pace Clark slots in on fly, not a bad pick especially considering he’s seeded 2nd in the 200.

2016 Olympians were also eligible to participate.

I have a suggestion. Why not have some kind of a contest next year in which people pick their own starters for each squad?

dressel should swim the mile

I think this is the first stop where everyone’s roster worked out pretty well, with no gaping holes. It’s a stacked field though, so we’ll see how everyone performs.