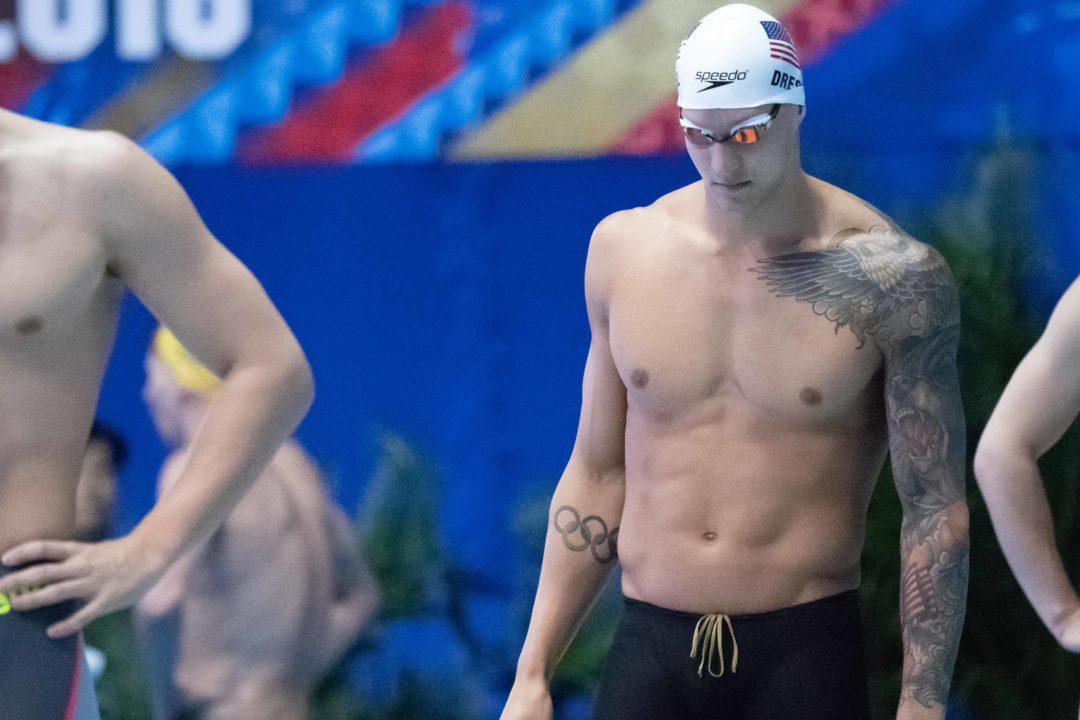 Though Caeleb Dressel has already swum at this meet, taking on the 200 free prelims and helping the U.S. to bronze in the mixed medley relay, this is the first of his main events this meet. Current photo via Mike Lewis/Ola Vista Photography

Swimmers are gearing up for day 2 prelims of the 2018 Pan Pacific Championships in Tokyo, Japan. This morning brings prelims of the 100 free, 200 fly, and 100 back. Once again, the Americans will be competing for Worlds spots, as the fastest 2 men and women from finals between this meet and U.S. Nationals will advance to Worlds in the individual races. In the 100 free, the 3rd and 4th fastest Americans between finals of Pan Pacs and Nationals will be guaranteed a Worlds spot for the relay, while the 5th and 6th fastest have a good shot of making the team as well. Read on for a preview of 3 of the exciting races to come.

Though Caeleb Dressel has already swum at this meet, taking on the 200 free prelims and helping the U.S. to bronze in the mixed medley relay, this is the first of his main events this meet. Dressel, the reigning World Champion in the sprint freestyles, was 6th in this event at U.S. Nationals, but should be in better form here. Zach Apple, who put up the fastest time of U.S. Nationals with his prelims swim, and Blake Pieroni, who won U.S. Nationals, are the men to beat with a pair of 48.0s in order for Dressel to nab an individual Worlds spot.

The battle for the top 4 Americans between Pan Pacs finals and Nationals finals should be a good one. Only the top 4 Americans are guaranteed a Worlds relay spot, but the 5th and 6th fastest have a shot at qualifying too. So far, Pieroni and Olympic champ Nathan Adrian are the top 2, followed by Townley Haas and Apple. Michael Chadwick is 5th, while Dressel is 6th. Adrian, who finished 2nd at U.S. Nationals and had his winning streak snapped, is a definite title threat here. Japan’s Katsumi Nakamura and Brazil’s Pedro Spajari will also challenge as they’re entered sub-48.

RYAN MURPHY RACING TO RETURN TO THE TOP IN MEN’S 100 BACK:

Olympic champ Ryan Murphy wasn’t at his best last summer, but he’s well on his way back to the top after his performances at U.S. Nationals. Murphy and fellow 100 back Olympic champ Matt Grevers are the favorites, but Japan’s Ryosuke Irie should also be in the mix. Kitajima broke 53 on the leadoff of Japan’s mixed medley relay. Australian Mitch Larkin, the 2015 World Champion in the backstrokes, swim his fastest time since Rio on that leadoff as Australia ultimately won the race and he’s also a threat for 100 back gold.

Former World Record holder Cate Campbell put up the fastest split in history with a 50.93 freestyle anchor to give Australia the gold in the mixed medley relay. She has to be the favorite heading into this race, but Olympic champ and World champ Simone Manuel can never be counted out. On paper, Cambell had the faster time and looks like she’s in great form, but Manuel is an incredible racer and could pull off the win. Teammate Mallory Comerford, who briefly held the American Record last summer, is also in the mix. After going 1-2 in the 200 free to break their respective national records, Canada’s Taylor Ruck and Japan’s Rikako Ikee are medal favorites in this race and could pull off the win.

The American women will also be fighting for Worlds spots here. Margo Geer and Olympian Abbey Weitzeil currently occupy the 3rd and 4th spots for Americans, while Lia Neal and Allison Schmitt are 5th and 6th respectively. Geer, Weitzeil, and Schmitt will be racing the event here. One of the threats to break into the American top 6 is Kelsi Dahlia.

Catch real-time updates of these races and more shortly on SwimSwam’s live recap.

So does Zach Apple’s prelims time of 48.0 from Nationals count towards qualifying for Worlds? Or only his 48.3 from finals?

Only his finals time counts for Worlds selection.

Apparently no prelims times from Nationals or Pan Pacs will count for anything in WC consideration.

He looked really good in the 200. I’m liking him or Adrian to win it. But for the love of God, prove me wrong, Dressel.

kinda bold saying Dressel is the favorite, I am betting Adrian wins with a 47.7

At his best he’s far ahead of this field. He wasn’t that far off his 200 free best and that was a prelims swim, so I’m confident calling him the favorite in this event.

Excited to see what he can do here!

that 200 free PR was at a meet where he went 47.9 and he was off a little bit here, I’m confident in my pick, but we will see soon enough!

It’s not a sure thing by any means. I’m just giving him the benefit of the doubt since it seems like he didn’t rest much at all for nationals and the 200 free is an off event. I hope it’s a good race though. It’ll be fun to watch 🙂

When you consider how slow he went at the Mel Zajac meet (lost the 100 free in 49 mid-high), he actually was rested at least to the level of his SEC taper for Nationals. He’s just off. His freestyle looks terrible, and he doesn’t have the hops he usually has. He’s had several years of consecutive, escalating pounding from the lead-up to Rio, no break, NCAA season, Worlds, NCAA season, now this.

I’m totally on board with your prediction. I don’t think he makes the final. Adrian and Apple. Hope I’m wrong, but 47.8 wins it.

Apple for me too ….after that , its hard to predict except for Adrian / maybe Haas or Pieroni

Prelims swims at this meet are like finals swims, especially the 200 free, because only 2 advance to the finals, and the Worlds slots were on the line. Everyone swam as fast as they could in the morning. Haas improved a bit, but it wasn’t like the prelims of a U.S. nationals, where winners can coast in at 1:47 in the morning to make the top 8.

I’d be very surprised if Dressel wins. Obviously his best time is faster than everyone else’s, but he didn’t look “right” at Nationals, and so far, albeit a small sample size, he doesn’t look any better. Everyone was convinced that he wasn’t rested at Nationals, but we may see as this meet goes on that he was rested more than we all thought. We shall see but I wonder how much Troy’s training vs Jungbluth’s is affecting him.

You could even say he looks worse. His 100 fly split wasn’t great, and he died like crazy in the 200 free. At Nats, he had the slowest second 50 in the 100 of anyone in the field I believe. He just was over-trained for the amount of new professional commitments he had. He looks way to thin. It’s not the first time Troy has over-trained someone (Lochte in London).

second best time ever …..but was overtrained

He died in the relays and 200 free final not to mention being third in the 200 back. It isn’t fair at all
to criticize his 200 IM as he was just out of the 200 back final and was against that king!

dont be ignorant. it may have been lochtes best time but he had the slowest last 50 in the entire 400 im. slower than ye shwan of the womens. not to mention he died in the 200 free and 200 back. had he not been overtrained he wouldbe broken world record.

I doubt he would had broken a WR but he for sure would have went a best time.