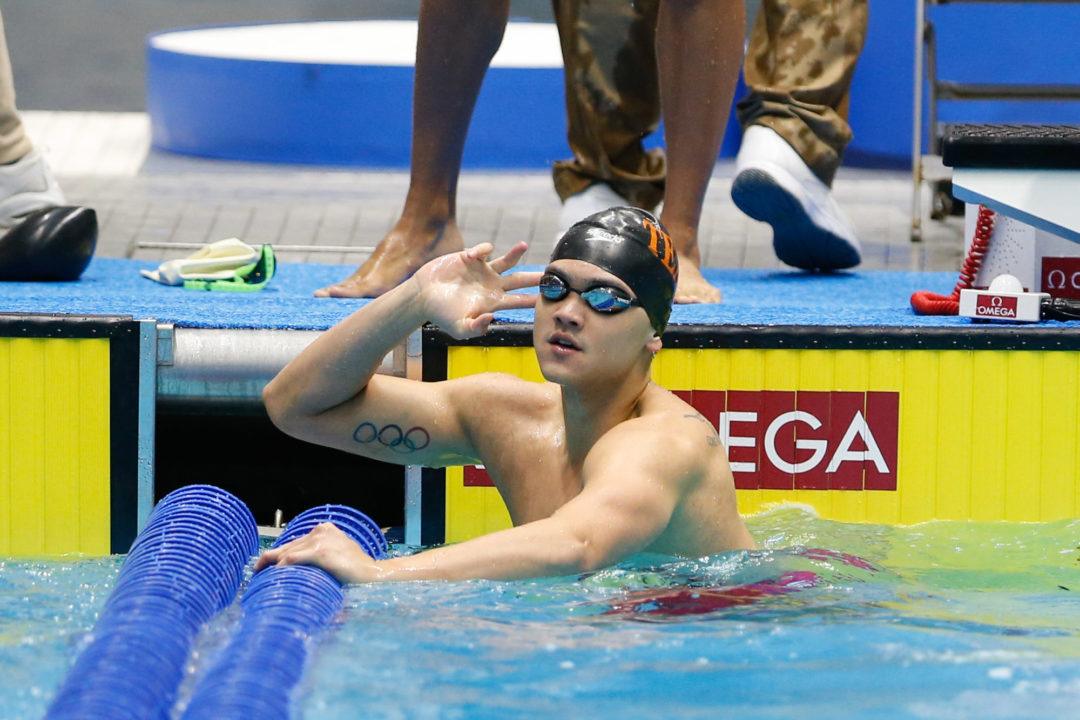 Joseph Schooling will be looking to recapture the 200 fly NCAA title crown in his senior year. Archive photo via Tim Binning/TheSwimPictures.com

After winning back-to-back 200 fly titles in his freshman and sophomore seasons, Texas Longhorn Joseph Schooling relinquished his crown to teammate Jack Conger last year. Along with losing his 100 fly title to former Bolles teammate Caeleb Dressel, Schooling missed the 200 fly final by a mile, placing 37th out of 41 swimmers.

There were several reasons for the performance, with Schooling sighting a lack of motivation after winning Olympic gold and dealing with a stomach virus throughout the meet. During the summer he lost to Dressel again in the 100 fly, settling for bronze at World’s, giving him even more motivation heading into his final collegiate season.

Heading into NCAAs last season the 22-year-old had only swum the 200 fly at three different meets, and the lack of preparation showed. This time around he’s done it seven times, five of which were faster than his 1:45.47 from last season’s NCAAs. He’s put in the work and is ready to execute. His in-season times are similar to those done in his first two years, with a season best of 1:40.72 from the Texas Invite putting him 4th in the country. He’s looking good to get back down to his 2016 best of 1:37.97, and will look to take down Conger’s NCAA and U.S. Open Record of 1:37.35.

Perhaps Schooling’s biggest obstacle back to the title is his Singaporean countryman Zheng Quah, who was the runner-up last year in his freshman season in a very impressive 1:38.83. Already 1:40 twice this season, he’s setting up to be right around where he was last year. The question is, can Schooling go better than that? We’ll find out.

The only swimmer sitting above the Cal sophomore in the rankings this year is Indiana’s Vini Lanza, the lone man sub-1:40. The Brazilian native had a breakout performance at the Big Ten Championships, winning seven gold medals and earning personal best times in all three of his individual events. In the 200 fly he hit 1:39.95, a full second under his best from the year prior. The question with him is, after adding from Big Ten’s to NCAAs in every event last season, can he turn it around and improve this time around? If he can get under 1:40 again he should be in the top three.

Along with Quah, the others swimming this event who were in the A-final last year are Gunnar Bentz of Georgia, Andreas Vazaios of NC State, and Justin Wright of Arizona.

Bentz, a senior, sustained a broken collarbone in October which kept him out of the mix for the majority of the year. After sub-par swims at the SEC Championships and an NCAA invite in question, he threw down a 8th-ranked 1:40.97 200 fly to ensure his spot (as it turns out, if he didn’t swim that race, his previous season-best of 1:42.51 from a dual meet against Emory would’ve been .01 under the invite time). If he pulled out all the stops to ensure the invite, does he have any more time in him this year? After the injury it’s hard to tell. This event in particular will be an absolute war in the morning to get an A-final spot (seeds 4 through 21 are separated by less than a second), and if he can get there, he has a shot to get in the top-3 like he did last year (he was 3rd in an all-time best of 1:40.07). He’s produced some big swims with his back against the wall before, such as making the Olympic 800 free relay team in 2016, and can’t be counted out.

Vazaios, a junior from Greece who was the 2016 European 200 IM champion, came within a few tenths of his lifetime best at the Ohio State Invite in November (1:41.07), and then swam a time nearly identical to last year at the ACC Championships (1:41.35). He projects to be one of those going 1:40-something, but has the potential to get down into the 1:39s. The same goes for Wright, a senior, who broke 1:41 for the first time at NCAAs last year to place 7th, and then notched a personal best of 1:40.57 in December. Vazaios dropped .65 seconds from his seed time to his prelims time at NCAAs last year and Wright dropped half-a-second. That leaves us feeling good about both swimmers’ abilities to drop enough to get into the A-Final. Wright dropped again in finals in 2017 though, so we bumped him ahead of Vazaios on that basis.

The other two men sub-1:41 this season are Texas freshman Sam Pomajevich and Ohio State sophomore Noah Lense. Pomajevich, known to swim very well with a taper, lowered his best time by a second at the Texas Invite in 1:40.82. Longhorn coach Eddie Reese has proven to be one of the best coaches at getting the taper right for this meet, and Pomajevich is certainly a threat to the likes of Lanza, Vazaios and Wright if he’s on. Lense earned a big best at Big Ten’s in his freshman year, but was a DFS at NCAAs after coming in with a time that would’ve placed him 9th. Now a bit faster at 1:40.83, he’s in the mix for an A-final.

Behind the 1:40s, there’s a whopping 14 men who have been 1:41 this season (plus Vazaios, though he’s entered with his 1:40.77 from NCAAs last year). That mix includes last year’s B-finalists Michael Thomas (Cal), Jan Switkowski (Florida), Zach Harting (Louisville), Fynn Minuth (South Carolina) and Jack Saunderson (Towson). Freshman Nicolas Albiero (Louisville), Christian Ferraro (Georgia Tech), Trenton Julian (Cal) and Camden Murphy (Georgia) are exciting young prospects, and Cal’s Matt Josa and Texas A&M’s Brock Bonetti are well known speedsters who will have to shore up their back half in order to have a shot at a second swim.

Of note: this could be a big swing event if the team scoring winds up being as tight as we think it will be. Texas has the #4 and #6 seeds coming in, while Cal has the #2, #10, #14, and #21 seeds. This will be a crucial event, and if Cal can somehow sneak into a 2-up, 2-down here, in an event that comes very late in the meet, it could leave them within striking distance when the 400 free relays take to the pool.

Darkhorse: Jack Saunderson of Towson qualified for NCAAs last year with a 1:43.05 in this event, and then dropped more than a second to qualify for the B-Final with a 1:41.84. While he added that time all back in finals, he enters this year with a lifetime-best as his seed in 1:41.69. If Towson has hit his taper right again, and he drops another second, he would be crashing the A-Final as one of only 2 mid-major invitees in this event.

You heard it here first. Justin Wright drops a 1:38… winning it all. Comes back on Quah and Schooling last 50

Will take lower than that to win it

Schooling read this article in practice. He said it was “monotonous “.

It’s always hard to predict Texas at this meet. No real conference meet, and they train through most of the rest of the season.

Do people really get how much harder it is for these mid-major kids to perform at their peak at this meet? Having an entire team on deck cheering you on, swimming in adrenalin filled relays, getting pumped by teammate’s great swims is a huge advantage over being there with just you and your coach. Guys like Jack Saunderson have to create all the fire on their own. It’s amazing that they get there in the first place, let alone final! I’m rooting for Jack!!

Will there be a live stream of the men’s meet? TV? Do you have the info on this yet? Thanks!

Are these two actually friends…just wondering. Schooling seemed to ignore Quah last year after the 100 fly final. Then again maybe he was just angry.

Considering Schooling was pissed when he won with a US open & NCAA record, but didn’t break 44 in 2016, I’m sure losing in 2017 was even worse

That’s why he started having mythical practice swims. Tough to lose those.

They’ve said before that they are not best friends, but they are fine, ie they get along. They flew off together (with Zheng Wen’s sister) last year from Singapore back to California (I think) and hung around for awhile after that while meeting up with Joseph’s best friend. So……they’re fine.

*Raises hand* How can Vazaios be entered in with his time from last season? That seems counter to the whole point of having to qualify each year… and yes, I do understand that he would make the meet either way.

According to the USA database, his time from the European SCM Championships back in December just happens to convert to a 1:40.77, the same exact time he swam in prelims at NCAAs last year.