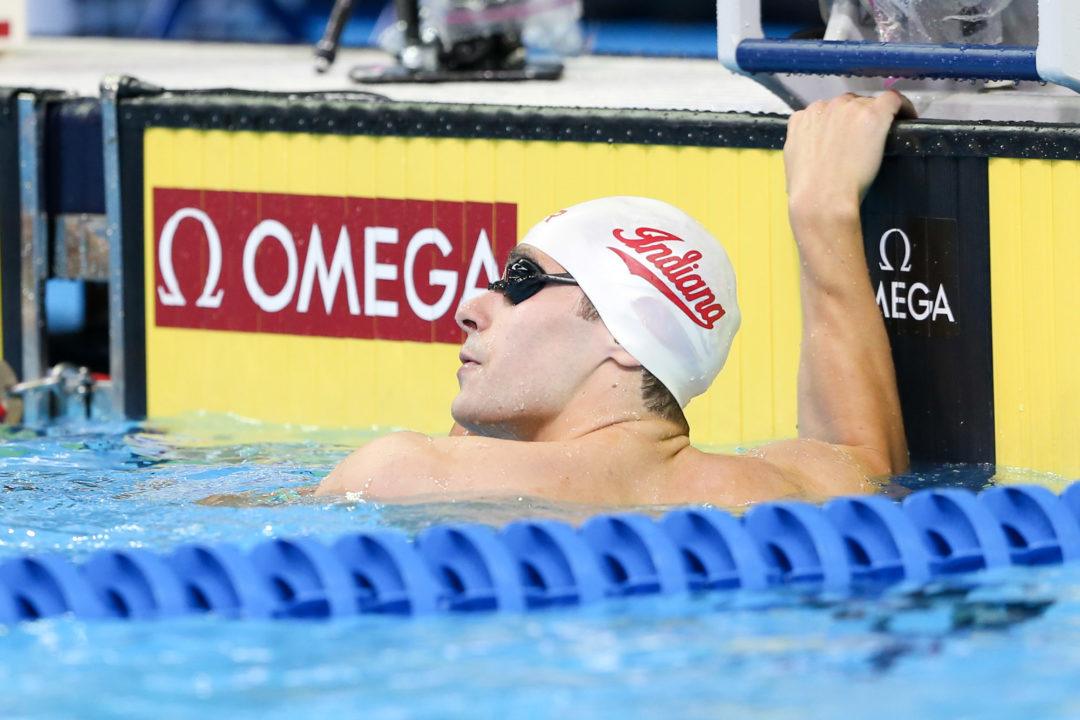 Michigan raked in an incredible 157 points in the 400 IM Friday night and took the 200 freestyle relay in a nail-biting finish against Indiana.

After dropping a very fast 1:31.51 split on Indiana’s 800 freestyle relay Wednesday night, Blake Pieroni followed up with an even more impressive 1:31.14 in the 200 freestyle Friday night.

Regrouping under the new assistant coaching duo of Mark Hill and Coley Stickels, Ray Looze’s Indiana Hoosiers look fantastic. After snagging the Big Ten title in 2017, IU has top tier talent and sheer numbers, and they might be slightly favored to take the Big Ten meet this year.

Blake Pieroni is a major asset, as he’ll hold down the sprint relays and is the favorite to take the 100 and 200 free at Big Tens. IU, in general, is utterly loaded in the sprint freestyle events. In the 50, 100, and 200, the Hoosiers have at least four swimmers in the conference’s top 10, and Pieroni is atop the rankings in the 100 and 200 this season.

Ian Finnerty is the best 100 breaststroker in the conference this year, while Gabriel Fantoni and Mohamed Samy rule the backstrokes– Fantoni has put down the fastest 100 this season in the conference, and Samy the quickest 200. That brings us to Vini Lanza, IU’s other big star besides Pieroni, who leads the conference in the 200 fly and 200 IM.

Michigan is very strong this year, too, though, and they pose a serious threat to IU. They have a vice grip on the distance freestyle events, handled by 2017 NCAA 1650 free runner-up Felix Auboeck, PJ Ransford, and freshman Ricardo Vargas. In addition, their sprint group led by Paul Powers is not to be underestimated, and their 200 IMers hold #2 through #6 ranks in the conference this year. Their breaststrokers and butterfliers have been on point this year, and the team certainly looks more daunting than last year.

Ohio State, a team that tied the Wolverines in team points at last year’s meet, aren’t quite as deep this year. They still have their stars, though, including butterfliers Michael Salazar and Noah Lense, backstroker Mark Belanger, and versatile freshman Paul DeLakis. While they might not be as loaded up top as they have in years past, the Buckeyes have a gigantic roster, and they will likely pickup lots of points by peppering B and C finals with scoring swimmers.

Indiana – Blake Pieroni (senior freestyler) Ian Finnerty (junior breaststroker), Ali Khalafalla (senior sprinter), Gabriel Fantoni (freshman backstroker), Vinicius Lanza (junior butterflier/IMer), Mohamed Samy (junior backstroker/freestyler) — Indiana’s sprint freestyle strength is so deep, and they have the individual stars in every event except the distance frees to pick up major A final points. Fantoni and Samy are huge backstroke pieces that will do big damage, and the IU divers will haul in a ton of points, too.

Michigan State – Phillip Meffert (sophomore IMer), Nick Leshok (senior breaststroker) — Meffert is one of only three swimmers that has been under 3:50 this year in the Big Ten; the other two are Wolverines Charlie Swanson and Tommy Cope. Leshok is a capable breaststroker who is ranked 7th in the conference this season.

Ohio State – Thomas Trace (senior backstroker), Michael Salazar (junior butterflier), Noah Lense (sophomore butterflier), Brayden Seal (senior distance freestyler), Mark Belanger (senior backstroker)  — Their names might not be as familiar as some of Indiana and Michigan’s stars, but all of the aforementioned swimmers have times ranking in the top 10. Salazar and Lense are a deadly butterfly duo.

Wisconsin – Victor Goicoechea (senior distance freestyler), MJ Mao (freshman everything), Cam Tysoe (sophomore backstroker) — Wisconsin is in a rebuilding phase. Mao, a freshman, is the team’s fastest breaststroker and 100 butterflier, an interesting combination. Goicoechea is third in the conference in the 1650 free, and Ido Haber is a new distance addition who could come through for the Badgers next week.

Nobody but the aforementioned eight have broken 1:47 this year. Lanza is the favorite, but any of these guys could challenge, and Michigan will be hungry to steal one away from the Hoosiers.

This will likely be a two-man, Wolverine-only race.

Felix Auboeck and PJ Ransford were both in the spectacular mile race at 2017 NCAAs, and with Northwestern’s Jordan Wilimovsky graduated, these are the two to watch. Wilimovsky (14:34.51) was sandwiched in between winner Auboeck (14:29.25) and 3rd place Ransford (14:38.72) at Big Tens last year, and with him gone, it seems Auboeck is the favorite this year.

Ransford is a great racer, though, and this could be another great 1650 race. If there’s a third player in this race at Big Tens, it will probably be another Wolverine– freshman Ricardo Vargas, whose 15:05.96 ranks fourth in the conference this year.

Another Michigan-IU blood bath, the Wolverines will send Paul Powers and IU will send Ali Khalafalla. Powers has never lost in a 50 free Big Ten Champs final. Khalafalla finished 6th as a freshman, then 2nd to Powers in 2016 and in 2017.

Both teams have a few additional names to add to the mix. For Michigan, it’s Duke alum and grad student James Peek and freshman Luis Gustavo Borges. For IU, it’s Pieroni (if he doesn’t swim the 200 IM), potentially Mohamed Samy, and Croatian freshmen Nikola Miljenic and Bruno Blaskovic.

Of course, we can’t forget Minnesota’s Bowen Becker. The junior has been 19.49 this year and ranks 4th in the conference behind Powers, Peek, and Borges, and he was 19.08 for fourth at Big Tens last year.

Michigan has the top 3 seeds in the race, meaning this will be a huge swing event between the two teams.

It’s going to be a close one between Michigan and Indiana. Both teams have their stars, and both teams have immense depth in several events. IU has a significant diving edge, and while the Swimulator (when using season top times) picks Michigan by 200 points over IU, diving is not taken into consideration. Indiana did beat Michigan handily in their dual, and while championship format meets are different from dual meets, it’s something to take note of.

Ohio State looks the solid bet for third, and Minnesota fourth. The next tier down looks to be a battle between Wisconsin and Purdue, and Purdue’s diving and overall strength this year should push them to fifth.

I wish Iowa could be part of the discussion. Always battling Michigan State and Northwestern to finish not last.

Yesterday I heard that Oxygen and Magnesium were going out…

I am looking forward to Ian Finnerty and Jacob Montague 100 yard breaststroke race.

Mich will go all in for this meet. IU may not rest/shave their top guys which will make it close.

Is this jack Collins ? ^

IU wins and they definitely have the better “NCAA” team.

MBottom loves to battle & this will truly be between IN & MI. I think IN divers make the difference for the win!