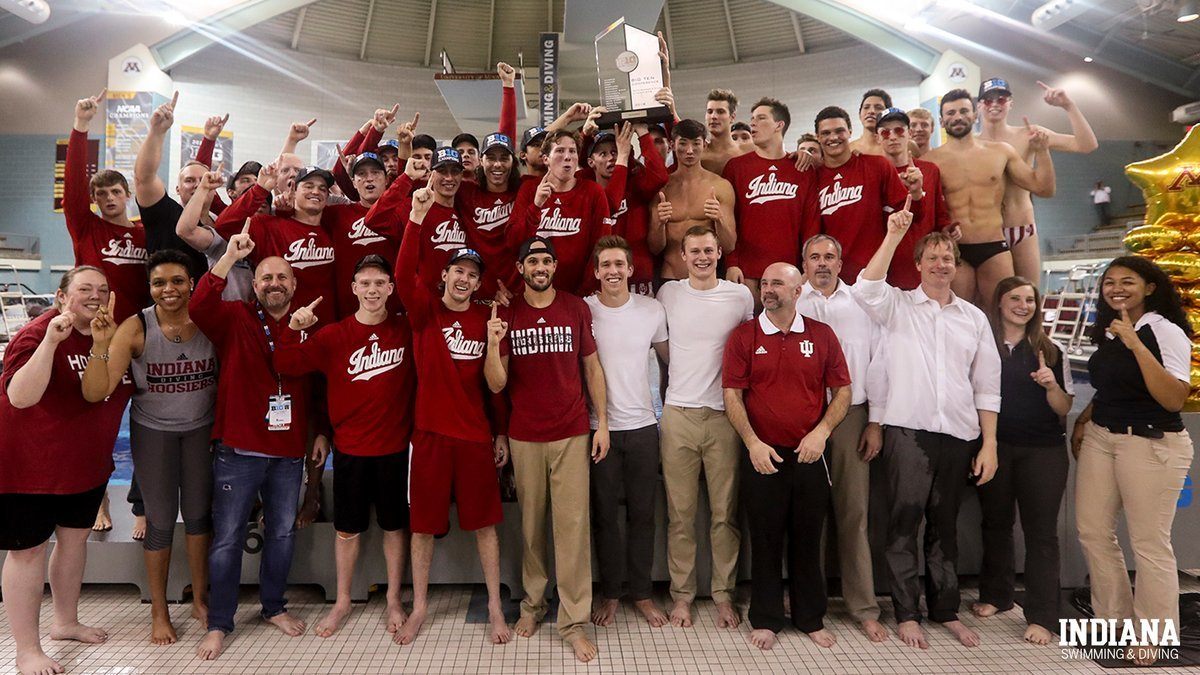 The Indiana men repeated as Big Ten champions for the first time since 1985. Current photo via Indiana Athletics

The 2018 Men’s B1G Ten Championships wrapped up on Saturday night, and it was the Indiana Hoosiers emerging with their second consecutive title. Heading into the final day with just a 10 and a half point lead, Indiana won four consecutive events during the last session before finishing things off in the 400 free relay.

The Hoosiers repeat as champions for the first time in 33 years, as they won three straight from 1983-85. It is their 26th title in program history, and their 14 gold medals won is their most since they won all the way back in 1975.

In terms of individual events, the Hoosiers took home ten titles to Michigan’s three. On top of that they won four of the five relays, and outscored them in diving 285-98.

Leading the way for them was junior Vini Lanza, who set a Big Ten record in winning seven gold medals. The Brazilian swept his three individual events in the 200 IM, 100 fly and 200 fly, setting Championship meet records in the latter two, while swimming on all four of Indiana’s winning relays.

Lanza’s perfect 3-for-3 meet scored him the maximum 96 points, but there were many other Hoosiers making big contributions. Ian Finnerty swept the breaststrokes and scored 89.5, Blake Pieroni and Mohamed Samy both put up 88, and freshmans Gabriel Fantoni and Bruno Blaskovic stepped up to combine for 136.

Their top two divers, Michael Hixon and Andrew Capobianco, each had a pair of podium finishes to finish with 77 and 74 points respectively.

In terms of depth, Michigan had the edge. They had 52 swims place in between 3rd and 16th to Indiana’s 39, but Indiana’s 16 top-2 finishes nearly doubled Michian’s (9). It was their top swimmers, divers, and clutch relay performances that won them this title.

Not including diving, no Big Ten men won an NCAA title last year. A few came close, including runner-up finishes for Blake Pieroni and Felix Auboeck, but after Big Ten’s it’s clear that multiple men could turn the trick in March.

Both Ian Finnerty and Minnesota’s Conner McHugh established themselves as major factors heading into the breaststroke events at NCAAs, with Finnerty sitting #2 in the nation in the 100 (to Caeleb Dressel, who may not swim the event), and the two of them 1-2 in the 200 after record setting swims on Saturday. With Will Licon out, the breaststrokes are wide open this year, and Finnerty, at least for now (with Pac-12s still to come), has established himself as quite possibly the man to beat in both (minus Dressel).

Along with those swims, we saw Gabriel Fantoni step up and lead-off Indiana’s record setting 400 medley relay in 45.17, putting him 4th in the nation. He’s certainly an outside shot to win and would need to be at least a 44-mid to contend, but this event is incredibly wide open with Ryan Murphy gone and John Shebat returning from injury.

Others that may not be in title contention but will make some noise at NCAAs include:

We also can’t forget about Ohio State, who had a phenomenal meet to take 3rd with 1300.5 points. They had some huge swims from freshman Paul DeLakis, who showed incredible versatility and the ability to swim big at night, and received major points from their junior and senior classes who combined for a whopping 668 of their 1034.5 individual points.

Along with Lanza winning swimmer of the meet, Hixon won diver of the meet and Vargas won freshman of the meet. Vargas was Michigan’s 2nd highest point scorer (83), finishing 2nd in the 500 and 1650 free and 3rd in the 400 IM.

For a comprehensive statistical breakdown of the meet, click here. For the B1G Ten press release on the meet, including full All-Big Ten first and second team rosters, click here.

All-in-All, this was a very successful meet.

IU Medley Relays are TOUGH! Great things are happening up in Bloomington, IN!!!! 1-2 in 3 events on Friday night is really impressive especially in the B1G conference. Ray has assembled a fantastic staff and they have those swimmers prepared. Going to be exciting to see the NCAAs this year.

Michigan Men also had some really great swims. Freshmen and sophomores contributed big time, contributions from divers with Ross Todd even placing Top 8 on two boards, their IMs (with all of the breaststrokers they have brought in), distance free (obviously). an elite backstroker(s), elite butterflyer, and more middle distance hurt imo. But the team fought and really hung tough with an Indiana squad packed with a handful of high end studs. Imagine if Felix Auboeck hadn’t backed out of his IU commitment for Michigan. James Peek also was a great addition to M as a grad transfer and made a huge difference for this team this year.

Indiana vs. Michigan rivalry makes both teams swim faster. Because it’s so close, every swimmer will think his swim counts toward the team’s push to win the Big 10 champs.

The Michigan coaches may go back to analyze how they can squeeze out a few more points.