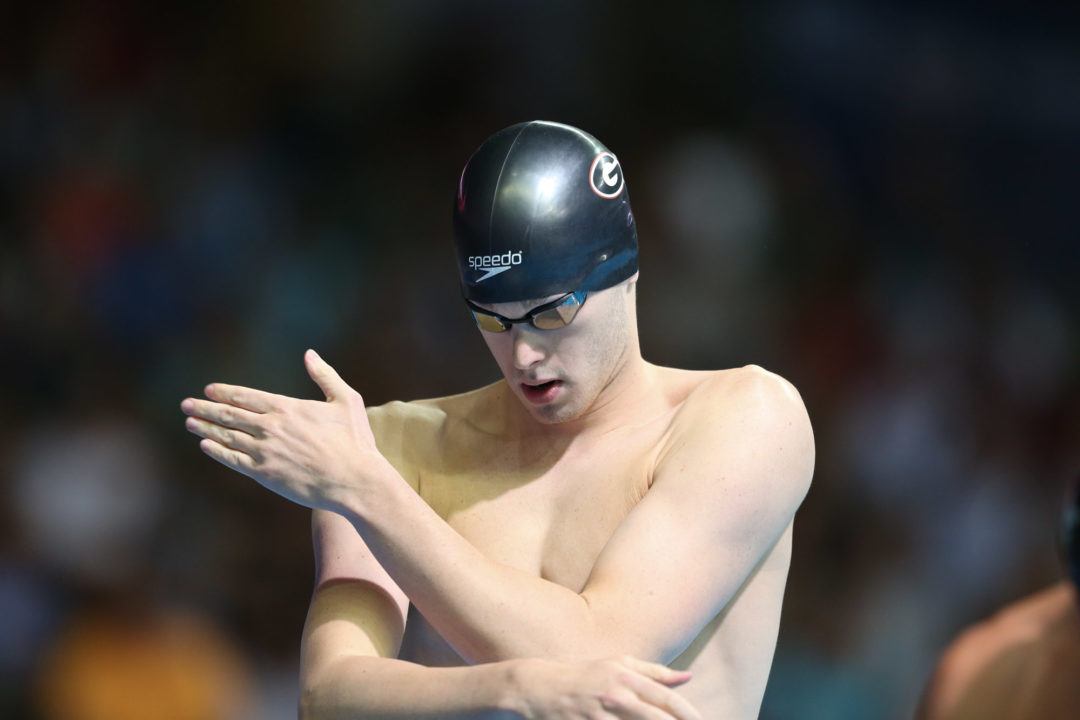 Georgia senior Gunnar Bentz entered the season as a favorite to win an NCAA title, especially the 400 IM, in March. After breaking his collarbone early in the season, though, he began competition only in the spring semester, and while he swam well at the SEC Championships, it wasn’t quite enough to earn him an NCAA qualification time.

He was one of a number of Bulldogs trying to cement their qualification on Sunday. Powell Brooks swam a :14.2.87 in the 200 fly, which leaves him in a precarious 30th place nationally in the event, which is unlikely to earn an NCAA invite. He opted to scratch the final rather than shoot for a drop (he would’ve needed to take off around 4-tenths to really feel comfortable heading into next weekend).

Freshman Greg Reed is in slightly better position: he knocked 2 seconds from his season best in the 1650 free to finish in 14:54.20. That time would’ve been under the invite line by two-and-a-half seconds last season, but this year it’s right on the edge. There are 4 swimmers from the Pac-12 with season-bests between 14:55 and 15:00, and if more than 2 of those swimmers jump Reed, he’ll probably be out, with around 29 men usually invited per event.

One swimmer who left no doubt for the Bulldogs on Sunday is sophomore Walker Higgins. He swam a 4:14.69 in the 500 free, which jumps him into 13th in the latest rankings and that will assuredly be enough to earn an NCAA invite. His teammates Kevin Litherland (4:16.14 – 27th) and Tal Davis (4:16.71) are probably out. Litherland’s 27th would be in if the season ended right now, but with 5 Pac-12 swimmers already having regular season times between 4:16.2 and 4:16.8, his time and ranking will have a target.

Youssef Said is another swimmer teetering. His 46.13 in the 100 back final on Sunday improved his season-best from 46.80 and ranks him 28th in the country. While his time is .15 inside of what it took to get invited last year, this season it could take a 46.0 to earn a spot in Minneapolis.

A question about ECAC’s for those in the know: are the people from NCSU, Virginia, etc. just people who didn’t make the conference team? Do those teams send coaches there? How does that work? Just curious…

Some of them are looking to have another shot at making nationals, but most as you stated are those swimmers not good enough to make the conference meet

Usually the top 2 or 3 in each event are using it as a last chance meet while the rest are those that didn’t make conference teams for conferences that have squad size limits.

When will the invited lists be sent out?

I agree, I think it’s really annoying that the dawgs didn’t focus more on secs. I get they have a history of over looking that meet , but they don’t have the teams they did in the past years and should’ve aimed for secs as their main meet bc regardless they won’t be a contender for the title at ncaas on either side, they had a better chance at getting sec titles.

9
-2
Reply
JP input is too short
Reply to  Gogators

Florida had a bunch of last-chance meet probable qualifiers this weekend too – Taylor, Balogh, Sanders, Lebed at least. Maybe Bayley Main but it look like the 100 back cut might dip under 46.

3
0
Reply
Aquajosh
Reply to  JP input is too short

0
0
Reply
JP input is too short
Reply to  Aquajosh

Matter of fact, scrolling through that 2008 meet results really quickly, I don’t think there’s an event besides the 100 free where the top-8 would have all made the meet this year.

That was my freshman year of college… that wasn’t that long ago.

Hahaha. He was already going. This just got him and A cut. Also lets no show if dawgs or gators have been better year to year guys AND girls. Jack and Harvey can coach anyone. The results show just look at what most the kids come out of high school and leave college at. Results year and year out undeniable amazing staff of coaches.

Troy – your 2nd sentence is not as certain as you’ve made it sound. Before the “A” cut, he was ranked 24th in the 200 IM and 200 fly. With the Pac-12 and MAC still to swim (the MAC has a swimmer named Artur Osvath who was within reach of Bentz’s previous season bests in both races) next weekend, he was far-from guaranteed a spot at NCAAs.

Ok so it wasnt guaranteed, however to act like its somehow negative, as gogator says it, to get cuts at a last chance meet is crazy especially for a guy that was out basically the whole season. Alot of top team have people make cuts at last chance meets.