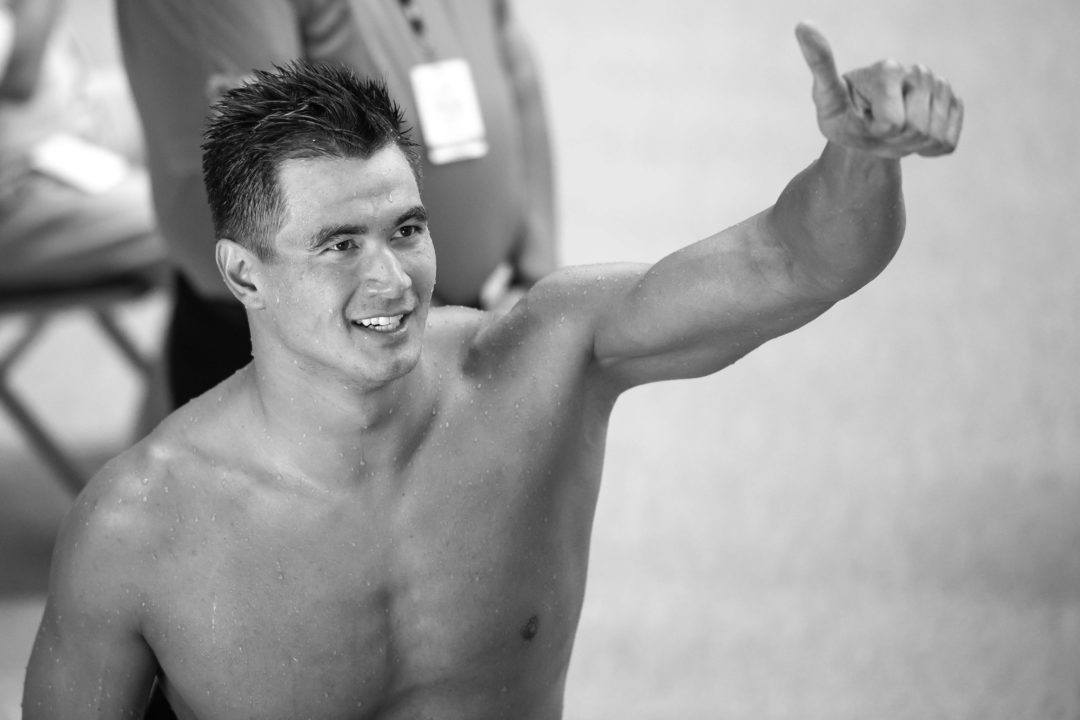 Nathan Adrian will look to add a second individual event to his Worlds schedule tonight in the men's 50 free. Current photo via Mike Lewis/Ola Vista Photography

Here we go. Tonight’s finals session marks the last of the 2017 U.S. World Trials. We’ve been treated to lots of fast and exciting swimming all week, and there will be a bit more tonight with four events on the schedule.

Check out a full preview of tonight’s finals here.

Entered with a yards time, Leah Smith swam in the early 1500 heats and posted a massive personal best time. Smith clocked 16:01.02, a time that stood up as the fastest of the day through finals, moving her into #2 in the world for the year behind Katie Ledecky. Ledecky will join Smith in this event in Budapest (the second spot is picked from top ranked 800 swimmer). Smith is now slated to swim five individual events in Budapest along with the 4×200 free relay.

Swimming in the top seeded heat with finals, Hannah Moore of the Wolfpack knocked 11 seconds off her seed to touch 1st in 16:08.68. The time gets her 2nd overall behind Smith. Open water swimmer Ashley Twichell swam one of the early heats as well, clocking 16:10.63 that holds up as 3rd best. Moore is now 5th in the world for the year, and Twichell is 7th.

After a pair of 2:10s this morning Melanie Margalis and Madisyn Cox had a very close battle in the middle lanes tonight. Margalis led early, and managed to fend off Cox coming home to take the win in 2:09.57 to Cox’s 2:09.69. Margalis qualifies for her first individual event at Worlds after making the 4×200 free relay, while Cox adds her name to the roster on the last night of racing. They move into #3 and 4 in the world for the year.

Stanford’s Ella Eastin had a great swim to get 3rd in 2:10.89, but just misses a position on the team after that crushing DQ on Thursday. She’ll still contest the World University Games this summer in both this event and the 200 fly.

The stacked men’s 200 IM field delivered a great race, with Stanford’s Abrahm DeVine pushing the gas on the backstroke leg to turn first at the 100 in 54.78. Chase Kalisz and Josh Prenot threw down 32-second splits on breaststroke to take over 1st and 2nd, and it all came down to the freestyle.

It looked like it was going to be Kalisz and Prenot, but DeVine charged home in a blazing 27.81 to out-split the entire field, including out-splitting Prenot by over a second, to move into 2nd in the closing metres. Kalisz touched 1st in 1:56.51, lowering his best time and adding a second event for Budapest.

DeVine touched 2nd in 1:56.79, knocking nearly two seconds off his best time for prelims and qualifying for his World Championship team. This has to be especially satisfying for DeVine after being DQed for the ‘Lochte rule’ in the 400 IM prelims, which coming in was considered his best event.

In the world rankings, Kalisz and DeVine now sit 4th and 5th.

Prenot was 3rd in 1:57.14, improving his best time but disappointingly missing the World Championship team after winning an Olympic silver last year. Gunnar Bentz closed strong for 4th in 1:58.31, and Will Licon of Texas was 5th in 1:58.90.

Clark Smith and Zane Grothe renewed acquaintances in the men’s 800 free after their battle in the 400 free last night, with another close battle coming down to the wire.

Simone Manuel executed a great 50 free tonight, winning by nearly half a second in 24.27 to move into #3 in the world. She adds a second individual event to her World Championship schedule after qualifying in the 100 on the first day.

Caeleb Dressel had it from the start, exploding into his breakout with an advantage and never relinquishing it, winning the men’s 50 in a time of 21.53 to equal his best time done at the 2015 Nationals in San Antonio. This is his third win of the meet, and he now has four individual events qualified for Worlds plus a ton of potential relays. Dressel now sits 3rd in the world in this event, trailing Ben Proud (GBR) and Vladimir Morozov (RUS).

Nathan Adrian edged out Cullen Jones for the second spot, touching in 21.87 to Jones’ 21.89 to join Dressel as the U.S. representatives in the sprint free events this summer. Jones has a second consecutive 3rd place finish in this event, as he finished in the same position last year in Omaha.

Ladies and Gentleman, ARE YOU READY?!?!

Whose ready for the only event that’s not stupid and matters?

This was a joke on my username^

I liked your joke

The final day of finals. Let’s do this