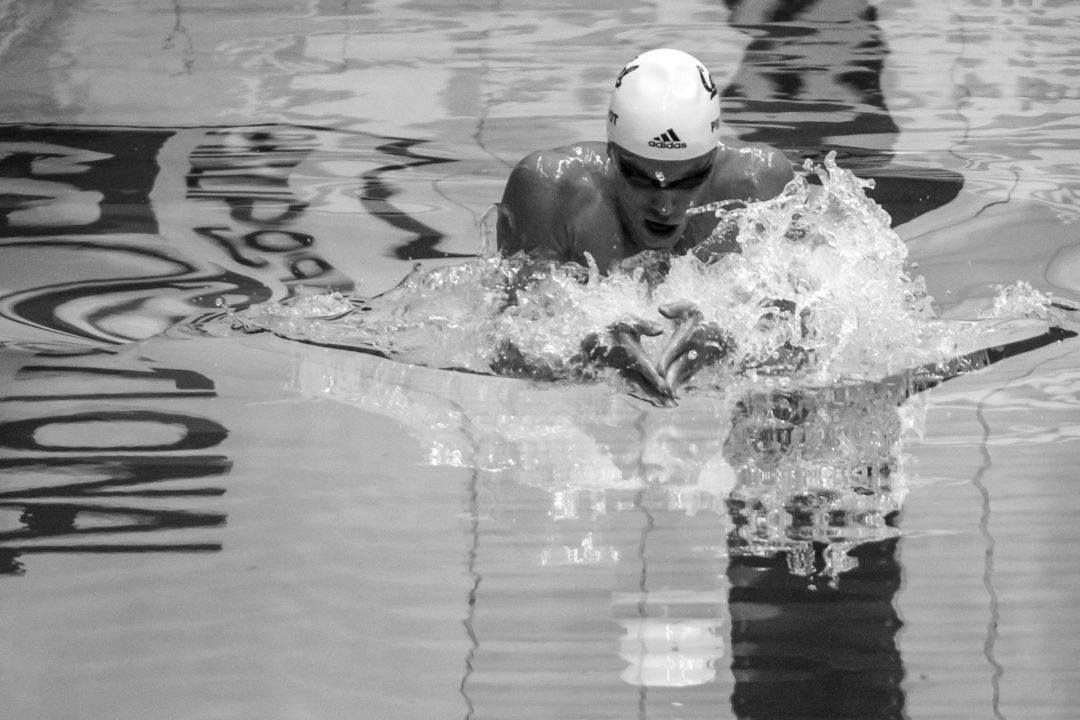 Plenty of swimmers will face their last chance to qualify for Worlds tonight, including Josh Prenot. Current photo via Mike Lewis/Ola Vista Photography

Tonight’s the night. The last night of the 2017 U.S. World Trials, representing the final chance for some big names to qualify for the upcoming World Championships later this month in Budapest.

Several of the big names who have yet to qualify for Budapest are pencilled in for spots on either the World University Games or the World Junior Championships, but that isn’t the case for some of the older swimmers.

The 200 IM will be the last chance for plenty of swimmers, including Madisyn Cox and Ella Eastin in the women’s event. Cox had a very good showing this morning, posting a personal best time to qualify 2nd overall in 2:10.53 behind Melanie Margalis (2:10.43).

Eastin, who had that heartbreaking DQ in the 400 IM, qualified 3rd overall, but was two and a half seconds behind the top two in 2:13.15. Cox and Margalis look tough to beat tonight, but even if Eastin doesn’t place in the top two she’s already tentatively qualified for WUGs in the 200 fly and would likely add this event if she doesn’t make Budapest.

Those look to be the top three, but no one in this final can be counted out with the #8 qualifier Alex Walsh (2:14.07) less than a second behind Eastin’s time that qualified her 3rd. Bethany Galat could also be a factor out of lane 2.

For the men, this race presents a last chance opportunity for Josh Prenot and Will Licon, who both missed in their best event, the 200 breast, along with Gunnar Bentz and Abrahm DeVine.

Those three already have solidified spots on the WUG roster if they don’t finish top two tonight, but that isn’t the case for Prenot who needs a big swim tonight. You’d have to consider him and Chase Kalisz the favorites for the two spots tonight after their swims in the morning and how they’ve performed in this event all year. Jay Litherland could also be a factor from lane 1 after going a best time in the 400 IM on Thursday.

Simone Manuel and Mallory Comerford were the only two under 25 seconds this morning, and are threatening to go 1-2 just as they did in the 100 free. Comerford was a big surprise to win the 100, and even more of a surprise to qualify 2nd this morning in 24.88.

Though Manuel will be tough to beat, Comerford is far from a sure thing for the second spot. Four more swimmers were 25.0 in prelims, led by Lia Neal and Abbey Weitzeil at 25.00. Kelsi Worrell (25.06) and Madison Kennedy (25.14) are right there too.

Kennedy and Weitzeil are the only two out of those mentioned yet to qualify for Worlds, with their last chance coming tonight. Weitzeil looked much better here than she did in the 100, and will lock up a WUG spot in this event even if she misses the World Championships. Out in lane 1, 2016 50 free NCAA champ Olivia Smoliga will challenge for a top two spot as well.

Tonight will be the last chance for 36-year-old Anthony Ervin and 33-year-old Cullen Jones to make the World Championship roster. Ervin, the two-time Olympic gold medalist, had his first swim of the meet this morning, while Jones narrowly missed the team in the 50 fly and had a solid prelim swim in the 100 free.

As has been the case all meet, Caeleb Dressel looked good this morning qualifying 1st in 21.75, but that second spot is largely up for grabs.

Jones qualified 2nd in 22.08, and could snag a spot as no one other than Dressel impressed this morning. Nathan Adrian (22.19) and Zach Apple (22.20) will obviously be quick after great showings in the 100, but based off Jones 50 fly performance he could be the man. Ervin got annihilated off the start this morning in his heat side-by-side with Dressel, and will be in tough to qualify. Even if he misses, he’s slated to compete at the Maccabiah Games in the coming weeks.

The other three in the A-final will be Michael Chadwick, Ryan Held and Michael Andrew. Chadwick (likely) has booked his spot on the Worlds team, while Held and Andrew have not. With such a stacked lineup it would be a big surprise for one of them to get top two, but they’ve both booked spots for WUG (Held) and World Juniors (Andrew).

Katie Ledecky has opted out of the women’s 1500 today, already assuring herself a spot in the event in Budapest as the top ranked 800 freestyler already on the team. Leah Smith and Cierra Runge are entered with yards times and will look to put up times from the early heats to challenge for the top spot. Smith will be the favorite after the meet she has had.

Due to Ledecky out and the yards entries, the heat swimming with finals is a little depleted. Joy Field, Hannah Moore, and Sierra Schmidt will have the center lanes and will try and take out whatever time is put up in the early heats. Thus far, open water star Ashley Twichell leads the way at 16:10.63 from the 2nd heat, actually faster than anyone’s seed (Field is the top seed at 16:14.79).

After a very exciting race in the men’s 1500, tonight’s 800 should be another good one. The top four seeds have already booked their tickets to Budapest, and it will be very interesting to see the top two in the 400, Zane Grothe and Clark Smith, face-off with the top two from the 1500, True Sweetser and Robert Finke.

Based off selection criteria, the top world ranked swimmer already on the team in either the 400 or the 1500 will get the second World Championship spot in this event (behind the winner). So, with Grothe 5th and Smith 8th ranked in the 400, they’ll be the two representatives for the U.S. in the 800 provided one of them wins. Say Sweetser pulls off the win, he’ll be joined by Grothe.

Maybe, Ella Eastin is finally becoming a 400 IM swimmer but she needs to worked on the turn for next year to not be disqualified.

So question for those who may know – although the US picks its team based on top 2 in each event, at some international championsip caliber meers, each nation can enter morethan2 swmmers per event, is this the case at worlds? I.e. Can, for example, Conge, though on the team for the 200 fly, also opt in to swim the 100 fly?

No. 2 per event only at World’s

No, for the non-free 50s they only the first place is guaranteed a spot on the team. Jones hasn’t made it yet.

At the olympics and worlds only two per country allow. At european/pan pacs/commonwealth champiobships you allow to enter up to 4 swimmers per country in each event but only 2 advance to the next round