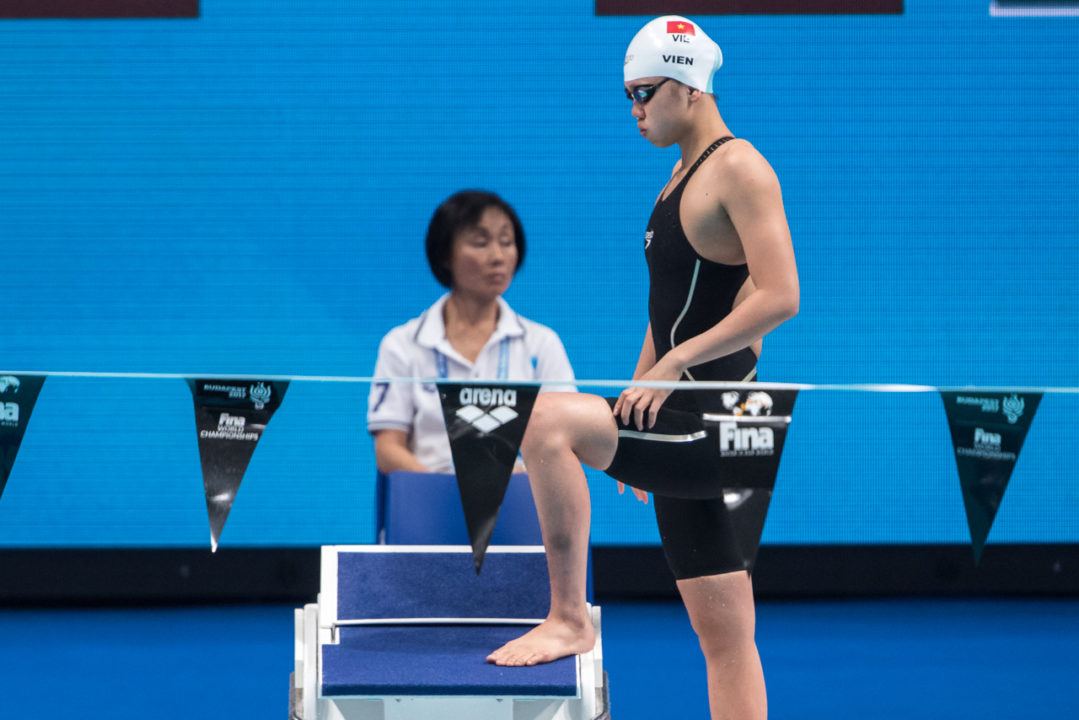 Just 1 day of swimming competition remains at the 2017 Southeast Asian (SEA) Games in Kuala Lumpur, Malaysia, with swimmers continuing to furiously try to get their hand on the wall first to help their nation’s medal tally. Heading into today, Singapore was comfortably leading the overall swimming medal count with 24 over the next-closest nation of Vietnam, but the former’s top guns of Joseph Schooling and Quah Zheng Wen weren’t in the pool today.

Vietnam’s MVP swimmer, Thi Anh Vien Nguyen has absolutely been on fire thus far this meet, having already collected 6 medals, with 5 of them being gold. Today was more of the same, as the 20-year-old kicked off the session with a monster win in the 400m IM. Clocking a time of 4:45.82, Vien Nguyen successfully defended her title, clearing the next-closest competitor, Azzahra Permatahani of Indonesia by over 4 seconds.

Vien Nguyen also got the job done in the women’s 50m backstroke race, clocking a time of 29.26 for gold in a new Games Record time. The previous mark stood at 28.90 from 2015, but the Vietnamese dynamo hacked .64 off of that standard to write her name into the SEA Games record books. Indonesia’s Sofie Kemala earned silver tonight in a time of 29.81, also slipping under the previous Games Record. There was a tie for bronze in the form of Anak Agung Istrik of Indonesia and Caroline Chan of Malaysia, who both touched in 29.91.

The women’s 200m breaststroke was an event Vien Nguyen couldn’t conquer today, however, as Thailand’s Phiangkhwan Pawapotako took the top prize in a new Games Record mark. Clocking 2:29.58, Pawapotako represented the only swimmer to dip under the 2:30 threshold, improving upon her runner-up finish from the 2015 edition of the Games.

For Vien Nguyen, she touched in 2:30.89 for silver, while Samantha Yeo of Singapore, who competes for the University of Michigan stateside, collected bronze in a mark of 2:32.41. Vie Nguyen now has 9 medals to her credit in Kuala Lumpur, with 7 of them being gold.

The combination of Quah Jing Wen, Quah Ting Wen, Yeo and Hoong En Qi collectively clocked a time of 4:09.32 in the women’s 4x100m medley for Singapore. For Ting Wen, this represents her 5th gold, while the Singaporeans carried on the tradition of winning this relay every Games since 2003.

In Schooling’s and Quah Zheng Wen‘s absence, Singapore’s Teong Tzen Wei stepped up and snatched gold in the men’s splash n’ dash. Entering the meet, the 20-year-old’s personal best stood at 22.90, but he crushed that with a new mark of 22.55 in his Games debut. With Teong’s win, he became just the 3rd Singaporean in the past 20 years to take the 50m freestyle crown.

Indonesia picked up a gold with Gagarin Nathaniel‘s victory in the men’s 100m breaststroke in at time of 1:01.76, while Vietnamese swimmer Nguyen Huu Kim Son took the men’s 400m IM in 4:22.12, a new Games Record time.

The medal table below includes ONLY the open water and pool swimming events through August 25th:

Not to be rude or anything Loretta, but I think 16 Golds, 6 Silvers, and 8 Bronze’s is 30 total medals. Would appreciate it if you changed it! Thanks

And the bronze medalist from Indonesia in 50m back is Anak Agung Istri Kania Ratih.
The Balinese name, like I Gede Siman Sudartawa.
FYI.

Thank you. We do hope he’s going to do well for the Vietnam team in the future.