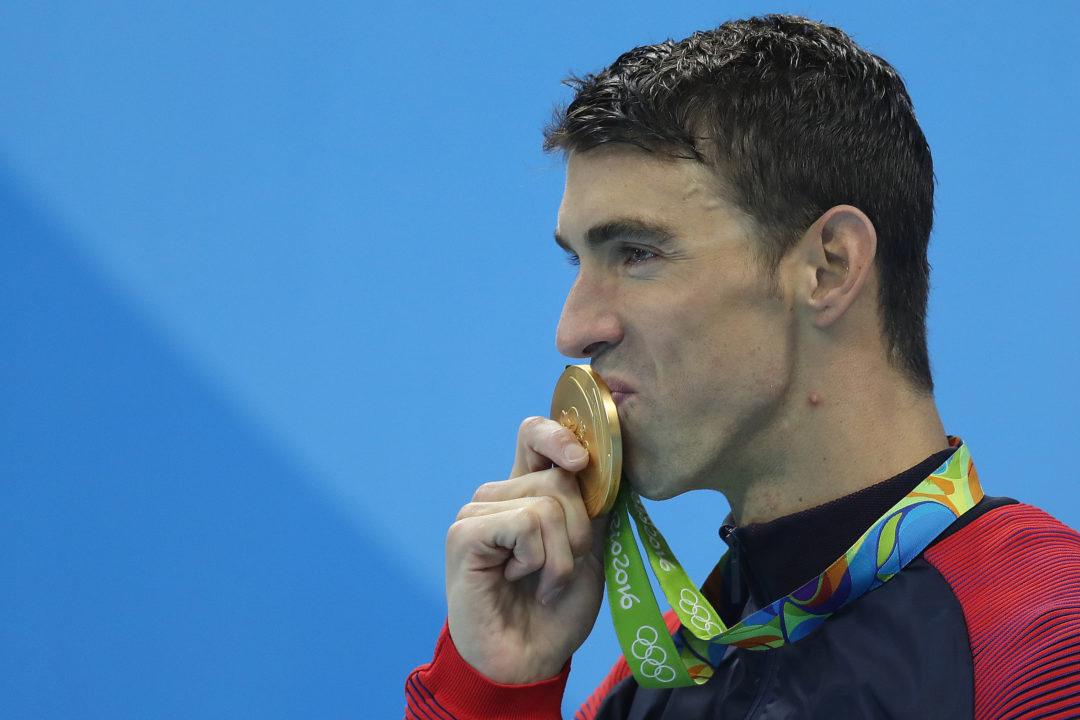 The fourth night of competition at the 2016 Rio Olympic Games has arrived and with it brings one of the most anticipated head-to-head matchups that’s partially responsible for the comeback of the greatest Olympian of all time: Michael Phelps.

In a rematch of the most personal loss of his career, Phelps will get the opportunity to avenge the gold that he lost in 2012 when South African Chad le Clos beat him to the wall. Before that happens however, there will be two events.

The men’s 100m freestyle is the first of the two. Kyle Chalmers of Australia and Caeleb Dressel of the United States were the fastest this morning. Defending Olympic champion Nathan Adrian was 16th overall, and will be looking to enhance his speed in order to safely advance to the final. There’s plenty of talent jam packed into these two semifinals.

Katie Ledecky will face off Sarah Sjostrom in the 200m freestyle also prior to Phelps’ swim. Ledecky has never lost an international final in an individual event, and if she wants to keep that streak alive she’s going to have to beat Sjostrom who has been on fire as of late. In their 200m freestyle semifinal, Sjostrom beat Ledecky in a head-to-head race. Tensions high for Ledecky’s streak to continue, but it will take a lot for her to get it done.

Finally, Phelps will race Chad le Clos in the final 200m butterfly of his storied career. It’s the fifth Olympic 200m butterfly final he will race in his career, and this one is personal. He was taunted by le Clos in the ready room yesterday before the semifinal, and the look on his face said it all: he does NOT want to lose this race. Look for Phelps to do whatever necessary to get his hands on the wall first this time.

Mireia Belmonte Garcia will lead the women’s 200m butterfly semifinals. The two Americans were also quick this morning and should be in the mix to get into the championship final. Following that race the men will race in the 200m breaststroke. Anton Chupkov of Russia emerged this morning with a huge best time and Russian national record and is now in the top spot heading into tonight’s semifinals.

Katinka Hosszu will look to earn a third gold medal at these games in the 200m IM. In order to do so she’s up against Siobhan-Marie O’Connor who was electric in yesterday’s semifinals.

The Americans and the British will face-off in the final event of the night: the men’s 4x200m freestyle relay. The Americans have never lost this event at the Olympics while the British are the reigning world champions.

If anybody was scared that Nathan Adrian of the United States wasn’t going to be able to make the final and defend his Olympic gold medal, he eliminated those fears with a fantastic semifinal performance to take the top seed heading into finals.

Adrian was a 47.83 to dominate the first of the two semifinals from an outside He was out quick and held on as his American counterpart Caeleb Dressel and Australia’s Cameron McEvoy chased him down. McEvoy ended up second in 47.93, Dressel third in 47.97. McEvoy took the third seed overall, Dressel the fifth.

The second semifinal is what really sets up tomorrow’s Olympic final which looks to be a duel between the Aussies and the Yanks mixed with a Canadian.

Santo Condorelli of Canada took things out hard and held on towards the end, although he was passed by Kyle Chalmers at the end. Chalmers stretched in for a time of 47.88, smashing his own world junior record and taking the second overall seed.

Condorelli managed to touch not far behind in 47.93. He’ll be heading into finals as the third overall seed tied with McEvoy. That time for Condorelli is a personal best and brings him closer to the best textile Canadian former of all time.

This final appeared to be the one hitch in Katie Ledecky‘s schedule, the one event where she wasn’t the favorite to win, the one final that potentially could disturb the her streak of never losing an international final in an individual event.

It appeared to be wrong.

Emma McKeon of Australia took things out as fast as could be, turning under world record pace at the 100-meter mark and leading both Sarah Sjostrom of Sweden and Ledecky of the United States.

On that third 50, Ledecky began to pull ahead with Sjostrom also moving up. The three of them charged ahead of the rest of the field, approaching the last wall all with hopes of taking home the gold.

Ledecky inched out in front and looked like she was going to take the win, but Sjostrom also began to move. With 25-meters to go it appeared as though Sjostrom was going to pass Ledecky, but at the end Ledecky found another gear and began to surge. She rocketed into the wall to win her third gold of these games with a 1:53.73 performance.

Chad le Clos of South Africa and Laszlo Cseh of Hungary appeared to be the two swimmers who could beat Phelps in this race. Everyone speculated that Phelps would lose after watching Cseh dominate at the European championships earlier this year.

At the 100-meter wall tonight, Phelps turned in first. Cseh was second, le Clos was third. Le Clos appeared to be saving for the last 100 where he usually makes his move, but Phelps never even let him get past his shoulder.

At the 150-wall Phelps turned first, Le Clos second, and Daiya Seto of Japan was third. That last 50 was rough for Phelps, he was well ahead as le Clos started to fade but the field began to creep up on him.

Phelps also become the oldest swimmer to ever win an individual Olympic gold medal in the process.

Following his win Phelps threw up the number one sign. Jumped on the lane rope, and signaled to the crowd to applause him. His dominance in the event was solidified, redeeming himself from the 2012 loss.

Madeline Groves of Australia made up for her morning swim with a very strong performance which once again puts her in contention for tomorrow’s gold medal in this event. The Aussie managed to drop a time of 2:05.66 which was almost a full second faster than anyone else in the field.

Mireia Belmonte Garcia of Spain, another swimmer who’s in the mix to win gold tomorrow, was a 2:06.52, swimming in the same semifinal as Groves and finishing second overall. Defending world champion Natsumi Hoshi of Japan touched in third with a 2:06.74 – that gives her the fourth overall seed.

Sitting in third overall is Zhou Yiun of China who won the first of the two semifinals. Yiun rocked a 2:06.52, putting up the exact same time as Belmonte.

Both Americans managed to squeek into the final. Hali Flickinger was a 2:07.02 for sixth overall, Cammile Adams was eighth in 2:07.22.

The men’s 200m breaststroke is heating up to be one of the tightest races of these games with plenty of swimmers edging into the 2:07-low territory and putting a scare on the world record.

This time around it was Ippei Watanabe of Japan rocking an Olympic record time of 2:07.22, bettering the 2:07.28 time that Daniel Gyurta of Hungary swam in 2012 to take home the gold.

Watanabe was fast, but amazingly there were four other swimmers who managed to go under 2:08 in order to get into the finals. The closest to him was Andrew Willis of Great Britain in a 2:07.73.

Hosszu put a scare on her world record, but ultimately fell short, posting a time of  2:06.58 to break the Olympic record she set in prelims.

O’Connor managed to hold on for the silver medal, touching in at 2:06.88 to record her personal best time in the event.

American Maya DiRado ended up finishing in the bronze medal position, adding to the silver she won in the 400m IM earlier in the meet. DiRado was a 2:08.79. Her American teammate Melanie Margalis was fourth in 2:09.21.

The American men claimed gold on the 4x200m freestyle relay giving Michael Phelps his second gold medal of the night, his 21st gold overall, and his third of these games.

Their winning time of 7:00.66 closed in on the world record performance from 2008 and managed to take back the relay from the British who won it at last year’s world championships.

It’s going to be another incredible night!

Alright Michael, let’s get this done.

As much as it feels wrong… I can understand the logic. It’s the Olympic Games, you HAVE to go with your best relay options. There can’t be too much room for feelings just because the USA has a 99% chance of winning…

Swim it at trials. Conger earned it.
It’s not all about Bob.
Chad teach him another lesson.

Phelps is 3x defending champion in this very event and a 19-time Olympic gold medalist. He doesn’t need to swim this event at trials to earn his spot.

What’s the point of trials if team is already picked. 100 free I understand, 200 free with not swimming it recently, even with his accomplishments is a disgrace.

True… There is no point for him to swim this

What lesson is that how to be a tool 101

Chad, teach him a lesson. Ha! How’d that work out for ya?

They could have taken out lochte. Conger got 3rd at trials! THIRD! He had the full right to swim with the big boys. He has shown to perform while lochte these past years hasn’t. We are going to win gold anyways, why not let the kid take a chance??

I really don’t understand the logic here. I am a big MP fan, but he better have a 1.44 handle tonight.

Did any of you people watch the 400m free relay? Yeah, let’s let Michael Jordan sit the bench and have Horace Grant take the last shot. Clowns.

Do you clowns ever get tired of being wrong on here?