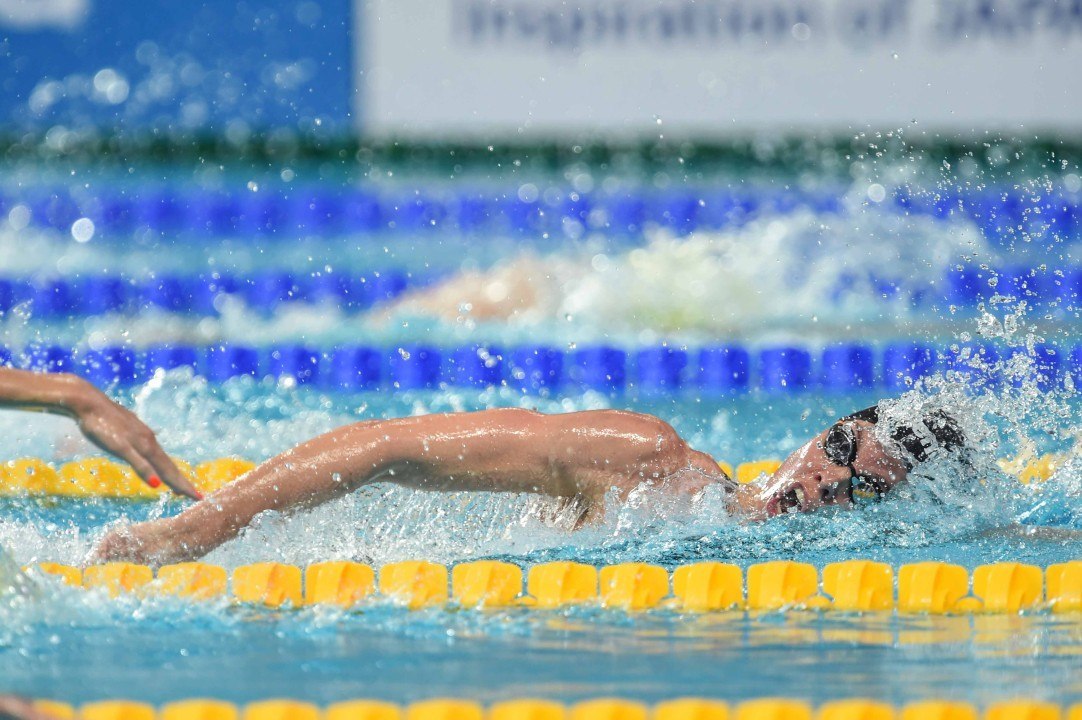 The Italian Spring Assoluti National Championships and Olympic Trials opened in Riccione on Tuesday, with 574 athletes from 141 teams. The meet is doubling as a selection meet for the Italian teams who will compete at 2016 Olympic Games in Rio de Janeiro, the 2016 LEN European Championships in London in May, and the 2016 European Junior Championships. The Italian qualifying standards for Rio are a big complicated; we have outlined the standards in our Day One recap here.

After a narrow defeat a year ago, Elena Gemo (Forestry / CC Aniene) beat out teammate and Italian record-holder, Silvia Di Pietro (Forest / CC Aniene) for the title in the women’s 50 fly with 26.12, taking .35 off her runner-up time from the 2015 Assoluti final. Di Pietro went 26.34 for the silver medal. Ilaria Bianchi (Yellow Flames / Blue 91) repeated as bronze medalist.

Former Italian record-holder and defending champion Matteo Rivolta (Rome Golden Flames / Team Insubrika) won the men’s 100 back over brand-new national record-holder, Piero Codia (Army / CC Aniene), 51.54 to 51.72. Codia had broken the Italian record in the event in heats this morning with 51.42. Both men fulfilled the requirements for qualification for Rio.

Daniele D’Angelo (CC Aniene) rounded out the podium for the second year in a row, this time in 52.60.

Two-time defending champion Federico Turrini (Army / Livorno) punched his ticket to Rio with a commanding 4:11.95 win in the men’s 400 IM. He was 1.3 seconds faster than a year ago, and nearly 8 seconds ahead of the rest of the field with the exception of runner-up Luca Marin (CC Aniene). Marin, the Italian record-holder in this event, finished second with 4:14.65. Martin could earn a bid to Rio if no Italian man goes faster than his 4:14.65 at European Championships in May or at Sette Colli in June.

Turrini took 6 seconds off his season-best and moved to third in the world, while Marin jumped to 12th.

The most exciting race of the night was the last 100 meters of the women’s 800 free. Simona Quadarella (CC Aniene) and Diletta Carli (Rome Golden Flames / Tirrenica) began by trading stroke for stroke before Carli pulled ahead at the 200. Carli continued to split high 31s while Quadarella was going 32-lows and falling farther behind. Down by a full second going into the bell turn, she outsplit Carli by 2/10 on the penultimate lap. As they turned for home, the two battled down the stretch. Quadarella got the touch, winning 8:28.06 to 8:28.22. While they missed the automatic qualifying time for Rio, both Quadarella and Carli moved into the world’s top 20 for the season. Martina de Memme (Army / Livorno) took the bronze medal with 8:31.79.

For the second event in a row, the Riccione crowd was treated to a thrilling finish. Last year’s second-place finishers (with a tie), Andrea Toniato (Yellow Flames / Team Veneto) and Italian record-holder Fabio Scozzoli (Army / Imolanuoto), were out first, turning with Nicolò Martinenghi (Brebbia) in front of the field at the 50. Toniato had a 2/10 edge at the wall, which served him well as both Scozzoli and Martinenghi were faster coming home. Scozzoli in particular nearly made up the gap, but Toniato was first to the wall by .03, winning 1:00.72 to 1:00.75. Martinenghi was third in 1:00.92.

Italian record-holder Federica Pellegrini, who had already qualified for Rio by virtue of her silver-medal performance at Kazan last summer, picked up a second event with her 53.78 win in the women’s 100 free. Pellegrini was third at the 50 wall but exploded over the second half of the race. She had an especially strong finish, and outsplit the field by well over a second on the back half. The swim moves her to 12th in the year so far this season.

CC Aniene’s A team broke the Italian national record in the men’s 800 free relay with 7:12.60 from Alex di Giorgio (1:48.69), Damiano Lestingi (1:47.60), Jonathan Boffa (1:48.70), and Filippo Magnini (1:47.61). That betters Italy’s prospects for inclusion in the 4×200 free relay in Rio by 1.77 seconds, although the qualifying period isn’t over until the end of May. As a reminder, Gianluca Maglia, Marco Belotti, Lestingi and Magnini went 7:13.77 in Kazan for the 13th time overall; the top 12 teams qualified for Rio, while the last four spots will be determined at the end of the qualifying period. Italy, then, has one more chance to improve their time in London at Euros.

Exciting races with very close finishes like in women’s 800 free (what a stamina for World Junior Champion Simona Quadarella) and 200 breaststroke (nice news the recovery of Lisa Fissneider), but also men’s 100 fly and 100 breast and a great 100 free from Federica Pellegrini (53.78 her textile best).
Considering that there are very young and very promising swimmers, Italian swimming future looking good.