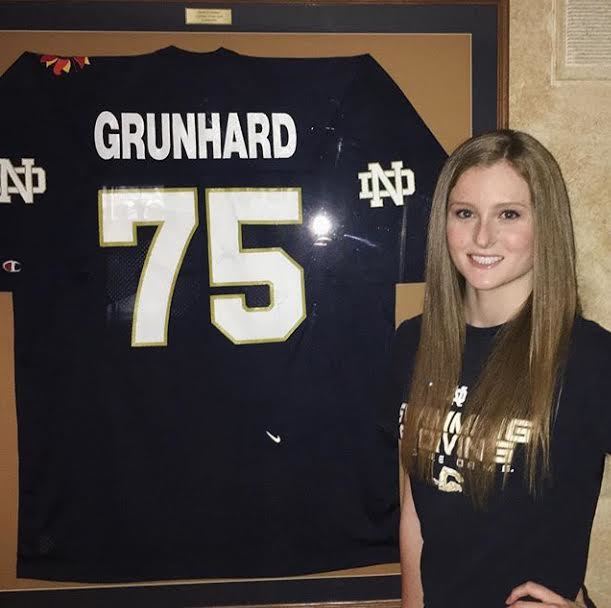 Cailey Grunhard of the Kansas City Swim Academy has given a verbal commitment to the Notre Dame Fighting Irish. As... Current photo via Tim Grunhard

Cailey Grunhard of the Kansas City Swim Academy has given a verbal commitment to the Notre Dame Fighting Irish. As Grunhard is finishing up her junior year at Bishop Miege High School, she won’t get to campus until the fall of 2017. Cailey will be a fourth-generation athlete for ND– her father was an All-American football player, while her grandfather and great-grandfather were both All-American pole vaulters for the Irish.

Grunhard has strong times in the back, IM, and fly events, but excels most at sprint fly. A look at her best times below:

Competing for Bishop Miege, Grunhard won the 100 butterfly in her sophomore season last May at the Kansas 5-1A State Championships. She also would have won the 200 IM from the looks of her splits (she was a 2:05, with the next-best finisher touching behind the 2:10 mark) if it weren’t for a DQ. Grunhard split a 24.30 on the fly leg of the Bishop Miege medley relay, too. Her 55.35 in the 100 fly is a 5-1A state record, and judging by her best time of 53.54, she’ll be taking that record down by a lot at the state meet this May.

Senior Catherine Galletti led two ND freshmen under 54 seconds this season in the 100 fly. Although Galletti has used up all of her eligibility, Grunhard will have two solid training partners in Nicole Smith and Sofia Revilak. Grunhard would have been the 3rd-fastest 100 butterflier and 4th-fastest 100 backstroker for the Fighting Irish this season, and just outside of the team top 5 in the 200 IM.