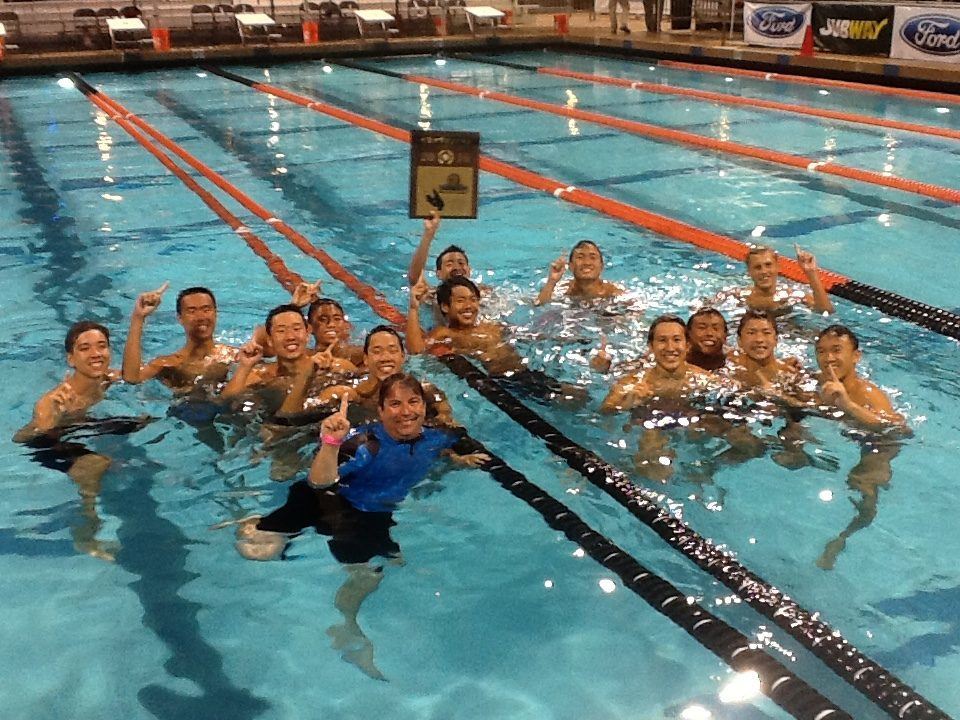 There were few surprises in the Southern Section Division III (smaller schools) girls’ meet but the boys contest was a thriller from start to finish.

Walnut, based on their psych sheet seedings, should have been up by about 45 points after the prelims session. However, a couple of misses here and there put them about 46 points behind Gabrielino, in second place. But because the CIF championships consist of prelims AND finals, there was still an opportunity to make up for the prelims mishaps. Admittedly, Walnut was assisted by Gabrielino who DQd on the very first relay, but they still had to execute in order to come out on top.

Six teams had points on the board before the swimming even began thanks to the diving event that concluded on Monday. Tom Amsbry of Poly Pasadena won the diving with 482.15 points; Brenden Brown of Poly Riverside was second in 389.05. Grant Petrusson of Sierra Canyon finished third with 219.60.

The boys’ meet began with a dramatic DQ in the 200 medley relay. After prelims it was clear that the team race would be a battle between Gabrielino, who had overperformed relative to their psych sheet seeding in prelims, and Walnut, who had underperformed. The two teams were in the middle lanes of the pool in the A final of the medley relay, trading leads and generating a lot of excitement from the outset. Just when it seemed Gabrielino had put the first points on the scoreboard, a big D flashed next to their lane number and Walnut earned the win. Jerry Chen (23.34), Brian Honng (27.44), Derek Wan (23.40), and Darren Ma (22.07) combined for the 1:36.25 win for Walnut.

The 200 free was another exciting race. Sierra Canyon junior Nate Biondi, who had qualified fifth out of prelims and was swimming in lane 3, took it out immediately. He put himself into clear water with the first 50, turning a half-body length ahead of the field. He was almost a second ahead at the 100 wall, but then Crossroads junior Luke Young began to make his move. Young outsplit Biondi over the second half of the race but couldn’t make up the .9-deficit. Biondi won in 1:43.07, his best time by well over 3 seconds; Young was runner-up with 1:43.54. Biondi pulled off another surprise win, this time in the 100 free. Coming into the meet seeded with 48.30, Biondi went 46.99 in prelims to earn the second spot for finals. He used the same strategy as in the 200: get out early and see how long you can hold on. He had worked on the tactic with his high school coach, who is also his father (and former Olympic gold-medaled sprinter Matt Biondi), and it worked for him again. Biondi got out in front of 50 free champion and top seed Andreas Langen of Flintridge Prep, stunning him with a 22.33-to-22.68 lead at the 50 wall. Langen never recovered and Biondi picked up his second win of the evening with 46.57. Langen was 46.65. Webb senior David Albers tied with Beverly Hills junior Greg Ayzenberg for third with 47.98.

The 200 IM was the next thriller. North junior Javier Bernal slipped by top-seeded Jerry Chen of Walnut thanks to a stellar middle 100. Bernal won with 1:51.45. Chen was second with 1:52.97. The 100 fly was no less exciting. Gabrielino junior Calvin Giang (50.67) came from behind to earn the win over Windward sophomore JP Mortenson (50.74) and Santa Monica junior Colin Casey (50.81). Chen and Giang were involved in another battle, this time against each other in the 100 back. Chen was just ahead the entire time and got the win, 50.46 to 50.80.

Nipomo freshman Wyatt Marsalek was all alone in the 500 free, winning by half a pool length in 4:37.55, just off his prelims time of 4:35.27. Marcos Hillje-Enthoven of Orcutt Academy was second in 4:43.81. Camarillo junior Nicholas Dykstra passed both Christian Meyer of Palm Springs and Wyatt Howard of Moorpark over the last 50 yards en route to his third-place finish of 4:46.85.

The 100 breast went to Valencia/Placentia junior Jacob Christensen in 56.62. Moorpark senior Masinsin Nicholas was runner-up in 57.06.

Walnut was up by 8 points headed into the final 400 free relay. Santa Monica (Brandon Bertolino, Evan Blaney, Colin Casey, and Xander Lee) got the win with 3:12.58. Walnut edged Gabrielino for second and thus sealed their team victory.