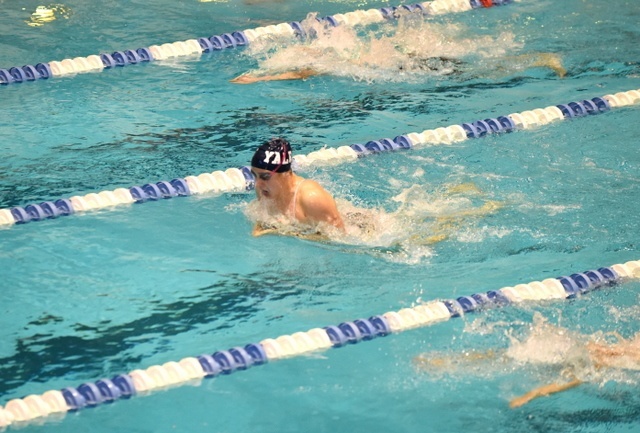 Yale's Paulina Kaminski (pictured) is the top qualifier in the 100 breast on Day Two of the 2015 Ivy League women's championships. Archive photo via Yale Sports Publicity

There were no major surprises or point shift coming out of Friday’s preliminary session at the 2015 Ivy League women’s championship meet.

Yale freshman Maddy Zimmerman cracked a 52.90 in prelims to post the top qualifying time for the 100 fly final. Columbia’s Christina Ray was next in 53.17. Princeton’s Elizabeth McDonald, Nikki Larson, and Elsa Welshofer, Cornell’s Jenna Immormino, Morgan Karetnick of Princeton, and Kendall Crawford of Harvard also made the A final. Crawford’s 54.53 marked the cutoff point.

Princeton freshman Claire McIlmail earned the right to lane four in tonight’s 200 free final with a 1:47.48 morning swim. Kina Zhou of Yale qualified ahead of Virginia Burns of Penn, who won the 500 last night. Kate Dillione of Brown, Daniela Johnson and Victoria Chan of Harvard, Olivia Jameson of Yale, and AnnClaire MacArt (1:50.60) of Dartmouth make up the rest of the field.

Another freshman, Paulina Kaminski of Yale, led the 100 breast field with a 1:02.19 in prelims. Stephanie Ferrell of Harvard qualified second, then Olivia Chan (Princeton), Jen Shahar (Columbia), Haley Wickham (Penn), Maddie Pujadas (Columbia), Ali Stephens-Pickeral (Yale), and Melissa Fulenwider (Princeton) rounded out the championship final. It took 1:03.83 to make the cut, which both Stephens-Pickeral and Fulenwider went in prelims.

Defending champion and meet record-holder Danielle Lee of Harvard posted the top time in the 100 back with 53.30. Taylor Sneed of Penn went 54.90, .01 faster than Kristina Li of Harvard to qualify second. The rest of the field is made up of Sada Stewart of Princeton, Harvard’s Kendall Crawford and Marissa Cominelli, Heidi VanderWel of Yale, and Dartmouth’s Kendese Nagle (55.37).

Heading into Day Two, here are the standings: