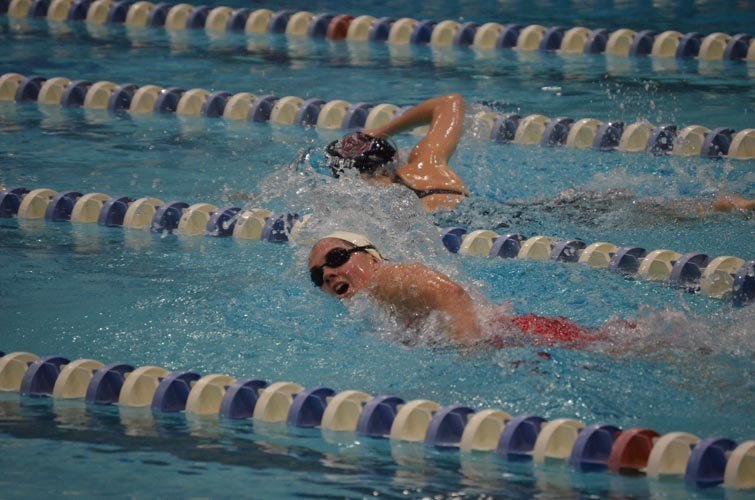 Over the first two days of the Women’s 2015 Missouri Valley Conference Championship, the Salukis of Southern Illinois had managed to stay within striking distance of the defending champion Missouri State Bears, ending theThursday night session only 8 points behind.  On Friday though, we got to see why the Bears were picked as the favorite coming in to the meet as their depth is starting to pay dividends, helping them increase their lead to 97 points.

In the 400 IM, the Bears managed to land three swimmers in the A Final, including the champion, Rebecca Amparano who finished almost four seconds ahead of anyone else in the field at 4:21.24.  The next three all finished close together with Cecilia Holmes from Illinois State taking second at 4:25.12 and Little Rock’s Jinson Kang taking third with 4:25.52.

In the 100 fly it was Evansville’s Danielle Freeman bringing home big points for the Aces with the win at 55.63.  Illinois State’s Lexi Nash landed second with 56.00 and the Bears’ Emma Wall touching third at 56.18.

The top three in the 200 freestyle were all within three tenths of each other with Evansville Michelle Tipton dealing an ace of a finish, out-touching both Illinois State’s Marissa Yontz at 1:48.42 and Saluki Kelsie Walker at 1:48.68 who was not able to repeat the inspired MVC record setting 1:47.82 relay lead-off from Wednesday night.

The 100 Breaststroke proved to be a big event for the Bears as they took two of the top three places on the medals stand.  Illinois State Redbird Rachel Holm managed to drop six tenths of a second from her preliminary swim for 1:03.20, sneaking her hand in between the top two seeds.  The Bears’ Anna Bump took the third spot with 1:03.41, and teammate Lauren Pavel was first with 1:02.61.

The 100 Back was a high scoring event for both the Saluki’s and Bears as each had three A-finalists,, with MSU landing three in the top 5, but it was Southern Illinois’ Sarah James who came out a half second ahead of the rest of the field with 55.33 for the win over Missouri State’s Megan Holthoff at 55.84 and Illinois State’s Rachel Root at 56.54.

The final scoring event of the evening went to Missouri State as the team of Megan Holthoff, Lauren Pavel, Dora Kiss and Anna Bump rocked a 3:44.13 to take first in the 400 Medley Relay.  The Redbirds of Illinois State took second with 3:45.59.  Evansville managed to come from behind and edge the Saluki’s out for the third place spot with the help of a monster 49.05 freestyle split from Michelle Tipton, touching the wall at 3:47.87 to Southern Illinois’ 3:48.07.