2015 French SC Nationals in Angers: Agnel, “Don’t Write Me Off Yet” 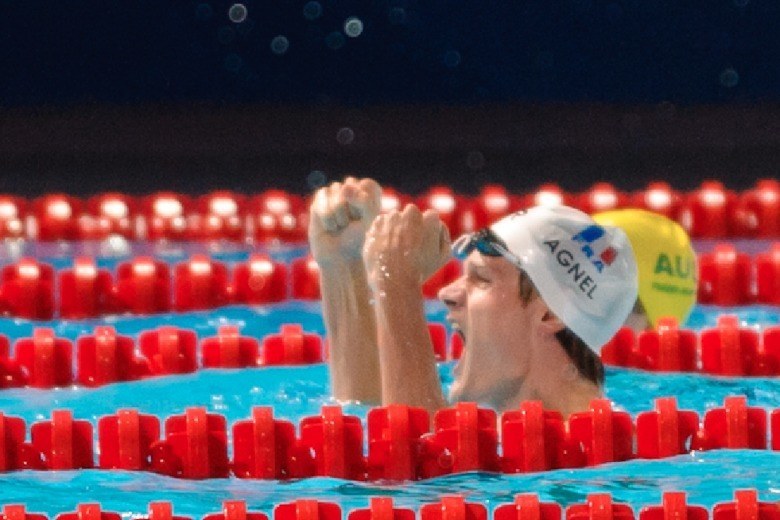 Yannick Agnel showed he isn't quite ready to hang up his cap yet; he won the men's 200 free at the 2015 French national short course championships with 1:42.96, just beating Jérémy Stravius of Amiens who was after his fifth title of the weekend. Archive photo via Victor Puig

The last day began with an upset of sorts. Mélanie Henique, who still swims under the Amiens banner although she has been training in Marseille for a year, earned the right to swim in lane 4 after posting the fastest qualifying time in the heats. Henique is known as a sprint butterflier and had won the 50 fly earlier in the week. The French national record-holder, Anna Santamans of Olympic Nice Natation, was in lane 5; Netherlands’ Femke Heemskerk, in lane 3. When it was all said and done, Henique touched out the others with 24.37. Santamans was second in 24.49, while Heemskerk went 24.57 for third. Mathilde Cini, who swims for Valence but trains in Marseille, was fourth and thus picked up the bronze medal.

Henique told interviewer Alain Bernard after her race that she could have had a better time had she not missed her turn, but that she was happy with her win. The freestyle “is something new” for her, something she has been working on since she started training in Marseille a year ago. It makes good sense; with the strict qualifying standards for making the French team for Rio, Henique, a natural sprinter, probably has a better chance in the 50 free than in the 100 fly, an event she has been struggling with. Santamans, meanwhile, has been working on adding the 100 free to her repertoire. In any case, when you add in Béryl Gastaldello, who went a sub-22 SCY this weekend at Art Adamson Invite, you have the makings of a very solid French sprint free relay.

In her formal statement to the press, Henique declared, “This national title makes me very happy. It took me a little while to realize I had won, but I improved my time and I am really happy. Romain Barnier had told me that the most important thing was to progress, and that’s what I have done. I am in a good space.”

Half the lanes of the championship final of the men’s 50 fly were filled with teammates from the Cercle des Nageurs de Marseille. Their top qualifier, Mehdy Metella, who had also won the 100 free and 100 fly earlier in the meet, had swum the fastest time in heats, 23.47. He was joined in the final by teammates Clément Mignon, Camille Lacourt, and Frédérick Bousquet, who had just squeaked into the championship final with an 8th-fastest 24.13. Also present were 200 fly specialist Jordan Coelho of Antibes and Eddie Moueddene of Amiens.

It looked like Mignon made the turn first at the 25, but Metella had a good wall, with an underwater that was well beyond 10 meters, and he put a half-body length between himself and Mignon. But way out in lane 8, Bousquet nearly rained on Metella’s parade; the veteran sprinter had perhaps the best second half in the field; he ended up with the silver medal in 23.01, just behind Metella’s 22.90 but comfortably ahead of Mignon’s 23.29.

Two national age group records fell in the 50 fly on Sunday: Jean-Marc Delices, who swims at Font-Romeu, took down the 15-year-old mark in the C final with 25.27, while Nicolas Vermorel of CN Polynésie etched his name in the record books for 16-year-olds with 24.44 in the morning’s heats.

Lara Grangeon, who swims for CN Calédoniens but trains at Font-Romeu, picked up her fourth national title in her signature race, the 400 IM (she also won the 200 IM, 200 breast, and 200 fly). Grangeon was the French women’s team’s only finalist at 2015 FINA World Championships at Kazan, and this was her event. She has had an excellent meet, earning PBs in every event she swam (400 free, 200 breast and 100/200 fly) except the 200 IM, and was hoping to go out with one more best time before heading off to represent France at European Short Course Championships next week.

Grangeon took out her fly like she meant business, and had built up a three body-length lead by the back-to-breast turn. But Mulhouse’s Fantine Lesaffre, who had posted the morning’s fastest qualifying time, closed the gap on the breaststroke leg, and nearly caught Grangeon coming home in the freestyle. Grangeon won in 4:34.52, about 3.5 seconds off her lifetime best, and Lesaffre was second with 4:35.62, her best by 2.9. The third step of the podium went to 15-year-old Cyrielle Duhamel of Stade Béthune Pélican Club. She came into the meet with a seed time of 4:52.58. In prelims, she broke the national age group record for 15-year-old girls with 4:47.89. In the final, she crashed through that barrier and straight to the national age group record for 16-year-old girls, with her third-place swim of 4:42.70.

Grangeon said afterwards, “I have had a really good championship. I had a lot of personal bests. I am satisfied and will go into the European Championships with a lot of confidence; that’s great.”

The men’s 200 breast final was a nail-biter that was really anyone’s race up to the end. The top three competitors –Quentin Coton and William Debourges of Antibes and Giacomo Perez Dortona of Marseille– broke away from the field by the 100. Only Jean Dencausse of Marseille, the youngest competitor in the final, was within a body length of the leaders at the 100. Perez Dortona had a slight lead on the others at that point. Coton pulled even with the Marseillais at the 150 wall, and all three of them turned together at the 175.

Swimming in the C final, 14-year-old Carl Aitkaci of Courbevoie notched yet another national age group record, this time with 2:18.93 in the 200 breast.

Montpellier teammates Femke Heemskerk of Netherlands and Coralie Balmy (who trains in Antibes) posted the top qualifying times in the 200 free heats. The pair had faced each other the day before in the 400 free, when Balmy crushed the second half of her race to overtake Heemskerk. Knowing that Heemskerk has a tendency to go out fast and then sometimes crumble, Balmy was hoping to employ the same strategy that had worked for her in the longer race. But Heemskerk never let up in Sunday’s 200 free.

Indeed it would seem that she is getting better control of the second half of her races now that she is training with Philippe Lucas. Heemskerk won with 1:52.53, splitting 26.3-28.3-28.7-29.0, over three seconds ahead of the wave that came in behind her. Margaux Fabre led that wave from start to finish. Swimming for Aqualove Sauvetage Montpellier, Fabre earned the national title with 1:55.54. Just behind her was Ophélie-Cyrielle Etienne (who swims for Lille but trains in Marseille) at 1:55.70, and Balmy with 1:56.07.

The most-anticipated race of the night featured Olympic gold medalist Yannick Agnel of Mulhouse against the star of the meet, Jérémy Stravius of Amiens. Stravius was the top seed, entered with 1:44.4, although his personal best is a 1:43.9 from 2009. Agnel came in with 1:45.5; he set the French national record with 1:39.70 in 2012. It was Jordan Pothain of Nautic Club Alp’38 who clocked the fastest 200 free in heats, though, with a PB of 1:44.63.

In the championship final, Agnel and Mehdy Metella of Marseille led the field at the 50 and again at the 100. Stravius trailed in third place, with Pothain just behind. Stravius caught Metella at the 150 wall, and was now within a body length of Agnel. While Stravius had the fastest fourth 50, he wasn’t able to overtake the leader, and Agnel won the crown with 1:42.96. Stravius, Pothain, and Metella followed in quick succession, each earning new PBs with 1:43.62, 1:44.01, and 1:44.36, respectively.

And that, ladies and gentlemen, is a 4×200 free relay to keep your eyes on.

Agnel told the press, “The national title means more to me than my time. I was hoping to go about a second faster but I swam more or less a good race. I knew that Jérémy would take it out fast and have good underwaters. It was important that I hold back on the first 100. The bet paid off this time.”

When asked by l’Equipe how he felt about not being the favorite in this race today, Agnel responded, “I never saw myself losing. I knew that it was going to be close but you never know how a race will play out. I just wanted to give this 200 my all. I know which weapons I can use right now. I knew before the race what I was capable of doing. I don’t listen to people and if I have anything to say to them it’s ,’Don’t write me off too quickly. Really. Don’t write me off too quickly.’”

No worries Yannick, nobody is writing you off. And nice to to see you swimming fast again!

Well this time would have placed 3rd in the 2013 euro sc’s, so agnel is nothing if yet, actually at the moment the 200 is anybody’s game since worlds was won in a 1:45.

I would love to see Agnel win the gold in Rio. Considering he is the only one under 1:44 In the last few years I think he has a good chance if he’s back in form

Anne does a fantastic job with these recaps. I’d love to see her take on more meets in the future.

Now Mignon is more pure-sprint oriented. At this French s.c. Nationals he swam greatly in 50 free (21.28 in the individual race and a 20.90 in the second leg of relay).
Anyway, long course is a totally different sport and I think that, for the future, Mehdy Metella could swim a decent leg for 4×200 French free-relay.