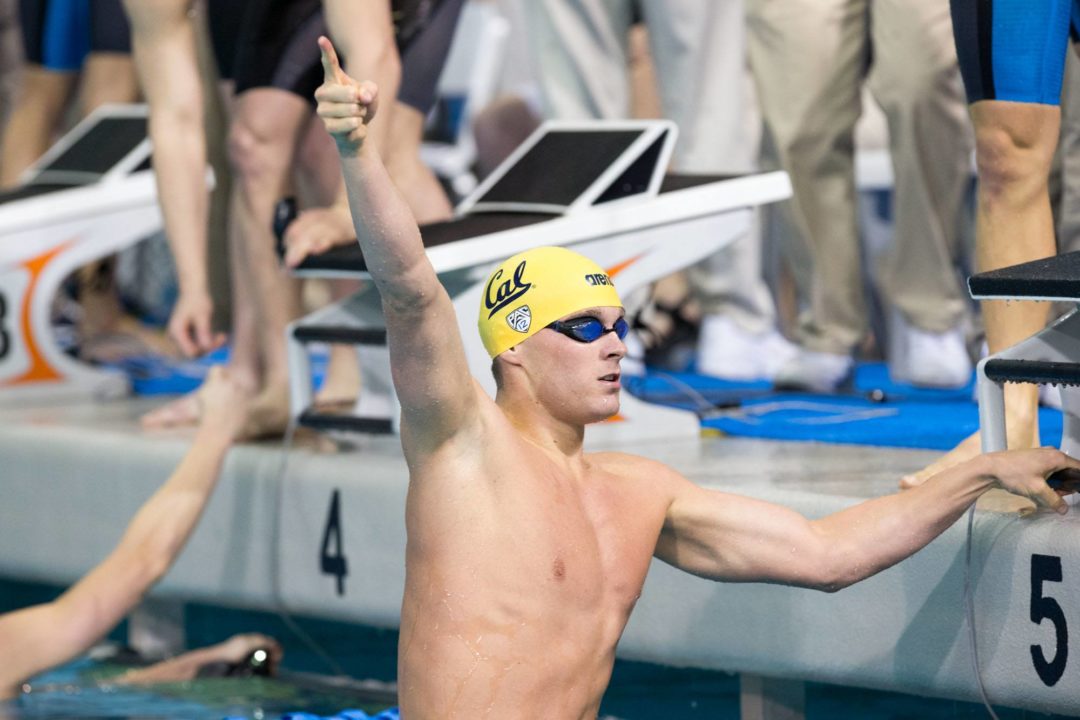 Seth Stubblefield came up with two huge relay anchor legs for Cal, which swept the relays and gained a ton of points on night one. The Golden Bears sit a close second to Texas with Florida still in the hunt Current photo via Tim Binning/TheSwimPictures.com

The first session of the men’s NCAA Championships was extremely fast and extremely unpredictable. Between some massive disqualifications, so big breakout swims and some big names missing out on championship heat swims, this morning was nothing if not dramatic.

Finals begin at 7 PM Central, and we’ll get to see who’s got more left in their tank after prelims and whether the potential 4-team battle for the overall points title will really shape up.

Connor Jaeger leads the 500 free, hoping to defend his title for defending overall champs Michigan. His teammate Kyle Whitaker will go after the 200 IM, where Florida’s Marcin Cieslak leads the field, and fellow Gator Brad deBorde will try to hang onto the top seed in the 50 free against Arizona’s Brad Tandy.

After a great morning, California exploded to start finals, going 1:15.27 to grab a come-from-behind win and rattle the American record, missing Stanford’s 2011 mark by just .01. That relay saw the best of everything from the Golden Bears. Tyler Messerschmidt led off in 19.23 and the rest of the relay went straight 18s – Ryan Murphy was 18.7, Tony Cox 18.8 and Seth Stubblefield a crushing 18.4 on the anchor leg to overcome Texas.

The Longhorns led through the middle of the race and held on for second – John Murray has the field’s fastest split at 18.3, and anchor Kip Darmody was 18.7 trying to hold off Cal. Texas was 1:15.53 and both of those top two teams were under the old pool record of 1:15.69.

Auburn took third, getting only a 19.36 leadoff leg from Marcelo Chierighini, who has had a disappointing day all around. On the other hand, the whole rest of that relay were 18s, including an 18.6 from freshman Kyle Darmody.

There was a bit of a dropoff from there – Arizona took fourth with a 19.15 leadoff leg from Brad Tandy. Mitchell Friedemann was also 18.8 on the anchor leg, but Giles Smith was just 19.4 on his leg and the team went 1:16.67.

This was another big event for DQs, with a few more teams dropping off in finals after 3 got disqualified this morning. Texas A&M false started in the A final, allowing Michigan to move up that one spot despite gaining almost two seconds.

After dropping far below their #3 seed in prelims, the Alabama Crimson Tide blew away the B final, going 1:16.57, but were disqualified for a false start, leaving Louisville in 9th place. Joao de Lucca led off in 19.38 and Carlyle Blondell was 19.1 for the Cardinals. USC and Penn State also jumped in that heat, DQing their relays.

USC’s Cristian Quintero won the 500 with his speed, cruising out to an early lead and sitting just off NCAA record pace in the front half, and he never slowed down enough to give the field a meaningful opportunity to reel him in. Quintero went 4:10.02 to win by 1.6 seconds for the Trojans and break the pool record held by former Texas star Michael Klueh at 4:11.42.

Connor Jaeger swam one lane over, sitting at Quintero’s hip for quite awhile, and you half-expected the defending champ to make a big move late. But Quintero had too much to work with and Jaeger actually dropped off some. Florida’s Dan Wallace was lurking in an outside lane and roared past Jaeger over the final 150 or so, going 4:11.62 for second place. Jaeger wound up third with a 4:12.67.

Georgia’s Mathias Koski toko fourth in 4:13.97, beating stud Texas freshman Jack Conger. Conger went out like a lightning bolt, pushing Quintero early from lane 1, but he couldn’t hang with the front of the pack quite yet. Conger still went 4:14.34, just a few tenths off his prelims best in what was a gutsy race for him.

Cal picked up its second straight heat win in the B final, with Jeremy Bagshaw going 4:13.40 to win by a second and a half.

A highly-competitive and entertaining 200 IM race went to the top-seeded Marcin Cieslak of Florida. Cieslak went 1:40.58, knocking off the pool record held by Olympian and Florida great Ryan Lochte at 1:40.97. Another big honor for Cieslak is that he tied Michael Phelps‘ career-best for the 4th-fastest time of all-time in the race, trailing only two Lochte swims and Bradley Ally.

Cieslak had to hold off a charging Chase Kalisz. The 2013 NCAA champ in the 400 IM was rolling late but ran out of pool in trying to catch Cieslak, going 1:41.19 for second. The fastest freestyle split actually went to Stanford’s David Nolan, who jumped back into the hunt late with a 24.2 split to take third in 1:41.38.

Michigan’s Kyle Whitaker was just a tick off his prelims swim which was, in turn, just a bit off his impressive Big Ten Championship time. Whitaker went 1:41.51 for fourth. The last man under 1:42 was Cal’s Josh Prenot, who went 1:41.97 for fifth.

Florida had the distinction of winning both heats of this race, as Eduardo Solaeache won the B final with a 1:42.67. He’s swimming well, so look for him to jump onto the breaststroke leg of the Gators’ 400 medley relay later tonight and try to help Florida hang onto its top seed.

The title of “Fastest Man in the NCAA” will have to be amended this season to “Fastest Men in the NCAA.” The 50 free ended in a tie between Arizona’s Brad Tandy and Alabama freshman Kristian Gkolomeev, each of whom went 18.95. Tandy with his insane start led early, but Gkolomeev reeled him in over the course of the last 15 meters to take a share of the title. This is an event with significant upheaval from a year ago, as neither of these two were even in the NCAA last semester, let alone last season.

Florida’s Brad deBorde took third, going 18.98 to be the last man under 19 at finals. Minnesota senior Derek Toomey put together a late charge to take 4th from the outside lane, going 19.05.

The splash-and-dash usually sets up as tight a field as you can imagine, and this race was no exception. .04 back from Toomey was Cal’s Seth Stubblefield, and Texas sophomore John Murray was just .02 back of him in 19.11.

The diving event was a big one for Texas, which put two divers in the championship final and got an event win from Michael Hixon. The freshman scored 443.50 points to take home the 1-meter event and jump into the team points lead by 9 over Cal and 11 over Florida.

Stanford’s Kristian Ipsen was second, scoring 436.55. Duke’s Nick McCrory put the Blue Devils on the board with a third-place finish with 412.15 points, and Missouri’s David Bonuchi and Texas’s Cory Bowersox also pulled in over 400 points. Bonuchi scored 405.95 for fourth and Bowersox put up 403.95 to take fifth.

For the second time tonight, Cal came out guns blazing on a relay swim, smashing the field with a 3:02.66 and dominating every single step of the way. Most exciting might be freshman Ryan Murphy, who led off in a blazing 44.91 that probably makes him the favorite in tomorrow’s 100 back. Transfer Chuck Katis split 50.5, the fastest of the field (with Arizona out of the picture after a morning DQ). Tony Cox was 45.4 and Seth Stubblefield came up big on his second anchor leg of the night, splitting 41.86 to power the Golden Bears home.

Florida was a distant second in 3:04.77. The Gators did indeed swap out breaststrokers, and Eduardo Solaeche improved the leg by almost a second, going 52.1. Marcin Cieslak had the field’s second-fastest fly split at 44.6, and Brad deBorde was 41.8 on the closing split.

The Gators touched out Texas by just .02 for that runner-up spot. Tripp Cooper actually outsplit Cieslak on the fly, going 44.4, which was a giant highlight of the relay for the Longhorns. Kip Darmody was also 45.2 on backstroke.

Georgia took fifth in 3:05.50 with Nic Fink splitting 51.4 on breaststroke and freshman Taylor Dale putting up a 45.9 backstroke leg. USC was just behind with their own stud backstroker, Luca Spinazzola, who went 45.6, and Dimitri Colupaev was 41.9 coming home on free.

Florida State took sixth (Pavel Sankovich was fast at 45.6 on backstroke and Paul Murray closed in 42.1) ahead of Michigan. The Wolverines got bit by that backstroke bug again, as John Wojciechowski could only muster a 48.3. Richard Funk was 51.1 on breaststroke, but the rest of the Wolverine’s lineup didn’t have enough firepower to overcome that big first-leg deficit.

Alabama closed out the A final with a 3:07.68. Senior BJ Hornikel was 41.9 on the anchor leg, a good sign for him moving forward.

It wouldn’t be a 2014 NCAA relay without a DQ, apparently, and there was indeed one here. At least the routine mixed up a little, though, as Ohio State got axed for a 15-meter violation on backstroker Garrett Trebilcock instead of a false start.