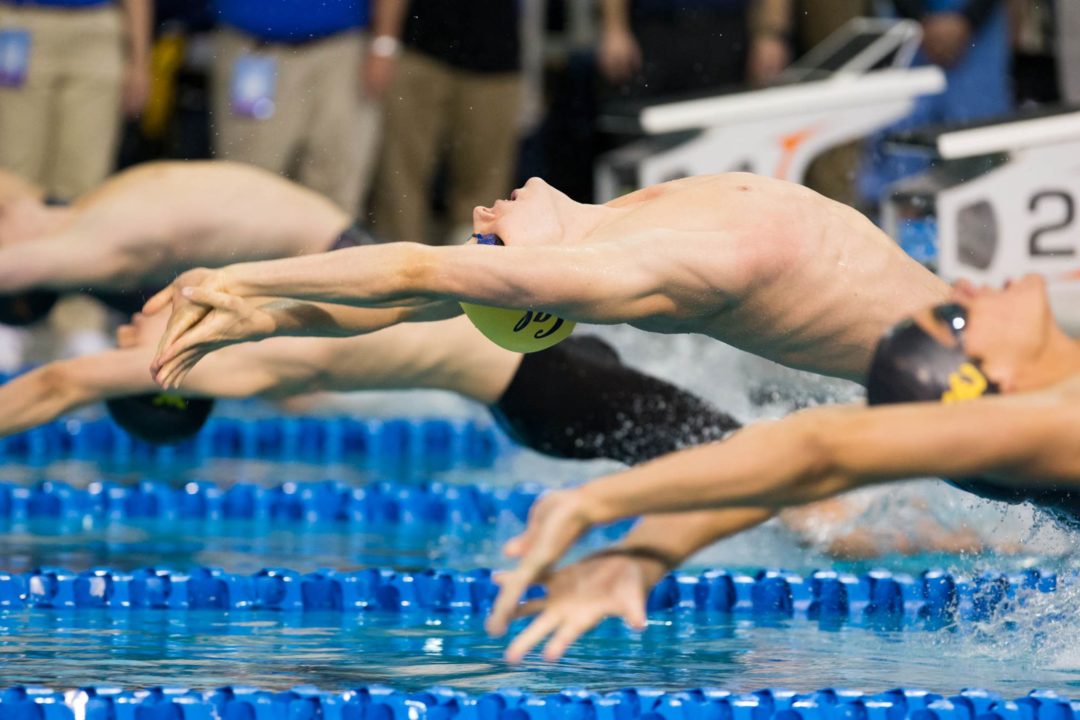 Cal's Ryan Murphy certainly lived up to his top 10 billing at the 2014 Men's NCAA Championships. Current photo via Tim Binning/TheSwimPictures.com

Michigan’s repeat NCAA 1650 champion Connor Jaeger talks about the year for the Wolverines, who had an up-and-down NCAA Championships but won two titles on Saturday.

The 2013-2014 NCAA season is complete, and now that a week has passed since the men’s championship meet, it’s time to do some reflection on the season.

We’ll begin with a reflection on the freshman class, and specifically revisit our “top 10 recruits” that we made all the way back in July of 2012 – when SwimSwam was still just a baby site. Read that post here.

A reminder that these top 10 classes focus on American recruits, so this rehash will as well (though we’ll still acknowledge some imports later).

This was a very strange class. Matthew Josa wound up in Division II at Queens University, where he had arguably the best season in Division II swimming history by a freshman or otherwise. Erik Risolvato, that we could tell, didn’t swim anywhere after committing to Arizona and then deciding to try Indian River for some JuCo time.

Evan Pinion wound up missing the whole season with an injury (though from the Tennessee coaching staff, it sounds like his recovery is going well).

But there were a clear top four swimmers in this class, and a 5th that swam very well as well, making it about a 50/50 shot. Ryan Murphy, with a pair of NCAA Division I national championships individually has to be considered the top performer in the class (we’d actually call him the top swimmer in the country this season, but that’s a different conversation). Jack Conger swam pretty well, though he didn’t swim a lot of best times as a freshman.

The aforementioned Josa had just a monster season for Queens, and one littered with times that would have held up in Division I, and perhaps the most unexpectedly-impressive in the class was Kyle Darmody, who was arguably Auburn’s MVP this season.

Reed Malone didn’t make quite the splash as the four above, but he did score individually at NCAA’s, drop a lot of time, and was on USC’s NCAA-title winning 800 free relay, so he earns positive marks as well.

Then there’s the two who didn’t swim, Risolvato and Pinion, leaving three who didn’t live up to expectations: Texas’ Clark Smith still seems to be settling in to what events he’ll focus on in college, and failed to go best times in any of his three championship events: the 100 fly, the 200 fly, or the 500 free. Steven Stumph kept largely the same events, but added in his best events as well: the 200 breast and the 400 IM.

Arizona’s Renny Richmond sort of straddled the line. He had a very nice freshman season, and participated as a prelims medley relay swimmer at NCAA’s. He dropped time almost across-the-board, so didn’t miss quite as badly as the other two above, but probably wouldn’t be ranked among the top 10 freshmen if we made this list after-the-fact. In hindsight, he may have been overranked back in 2012, but he appears on line to be a future player in the 100 fly and the sprint freestyles.

Who did we miss? Who could have taken the spots of the 5 guys who didn’t live up to top 10 billing? There were 6 other American freshmen who scored individually at NCAA’s that we caught:

Florida’s Blyzinskyj was the really big surprise there – he was a 49.0 in the 100 back coming out of high school, and managed to score in that event at NCAA’s as a freshman. The Georgia freshman Dale had a couple of DFS’ at NCAA’s to focus on relays, but he wound up scoring in the 100 back too – and split 45.98 leading off a medley relay.

Texas had a very, very deep class, so even though Smith didn’t make it to the big show, several of his classmates did – Conger (who was also in our top 10), Glass, and Licon. Michael Duderstadt should have been more obvious to go into the top 10, as he was a stud in high school, and Cal’s Gutierrez did really feel like a great “project” for Dave Durden.

All-in-all, no huge whiffs, but definitely a good group of surprises there.

There was also, of course, the Florida freshman Mitch D’Arrigo, who is sort-of a domestic recruit; he lived in Gainesville for a couple of years before going to college, but is Italian born-and-bred. He leads a typical impressive group of internationals that includes swimmers like Anton McKee and Kristian Gkolomeev of Alabama; Luke Percey of Tennessee; Joe Patching of Auburn; and Fabien Schwingensogl of Western Kentucky.

It’s always hard to include internationals in rankings, which is why we generally avoid attempting. It’s never obvious who is coming, or when they’re coming, so the exercise there is really more about figuring out who is going to make the leap.

At any rate, below we’ve put together a chart of the recruits that we called the top 10 in the class, and some metrics on their performance. A few notes:

Really interesting article, and the embedded
spreadsheet is cool. Appreciate the chutzpah to show you were not perfect on your picks.

Seconded. I give a lot of respect to anyone (person, website, entity) who is able to admit they were wrong and critically go through those mistakes.

This is very interesting, especially the time improvement spread sheet. Will see one for women also?

swimdad – yep, women’s should be out tomorrow.

I wonder if Mathew Josa is going to transfer. I’m sure a lot of coaches in D1 would love to have him on the team.

Are breaststrokers coming out of high school harder to predict relative to others? I feel like breaststroke is a hit or miss kind of a thing. Or am I wrong?

Also, is there a top 10 recruit prediction for the 2014 recruiting class?

Probably not gonna see Josa leaving… It seems like he purposely stayed there due to the SwimMAC connections… also getting a couple more top 100 recruits this year.

RE: Breaststrokers… Your Cal Bears are getting a couple of them in Silverthorn and Hoppe, and there are a few other 53/54low guys coming out- I think Texas is getting one.

Texas commit Austin Temple actually went 52.8 at the NASA meet a week or two ago.