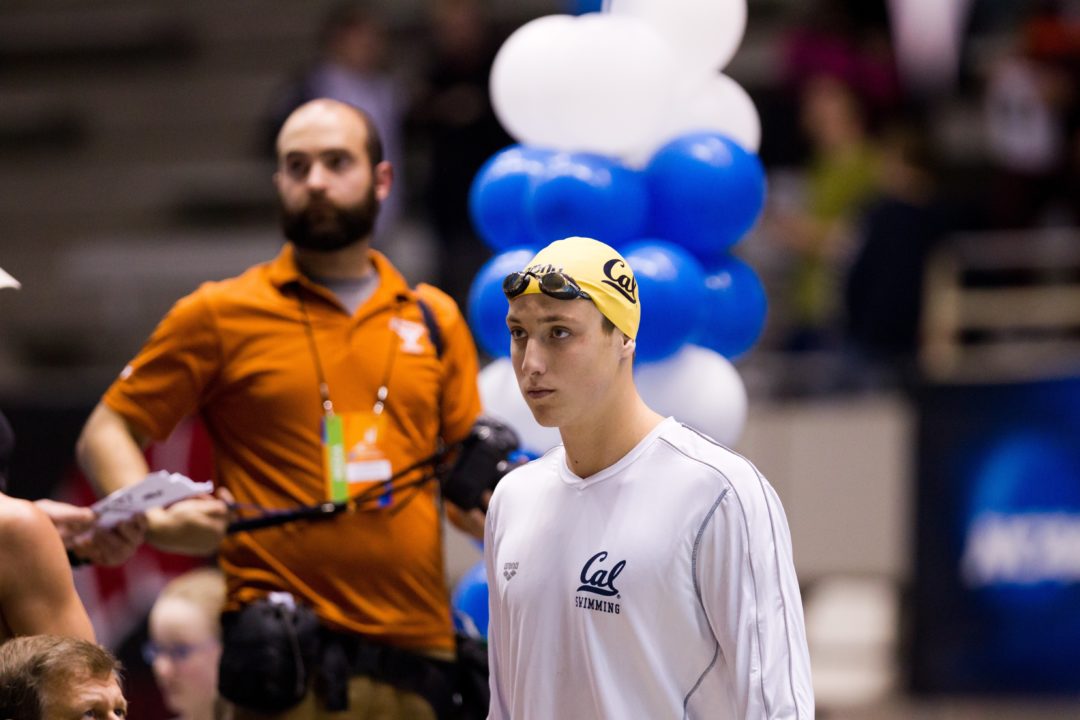 Quotes from Day 1 Include:

On how it feels to be NCAA Champions: It feels great, especially winning this event my freshman year with the same school and then obviously leaving and coming back. This is just phenomenal. I’m speechless.

On his race: I feel awesome. Since the beginning I felt really strong. I knew I had this. I had this all the time. I’m really proud of this. I’m really glad with my last performance. It was my last 500 free. I really wanted to make a good performance and I did.

On the amount of preparation he did to prepare for NCAAs: It was a lot of work. We welcome it. The whole season we’ve been working and I’m really happy with the results.

On what he did to win: I was second two years ago and last year so I’ve had enough of getting second.  That was extra motivating. Every time I had a tough practice or a tough moment I remembered how bad it felt getting second to push me through it. There was a lot of things I focused on this year that maybe I wasn’t as good at in the previous years. Definitely underwater, that was a big thing for me this year. I worked on some freestyle, that helped too.

On if holding the lead the whole race was his strategy: Yeah, I felt very good from the very beginning. Butterfly is my strongest stroke so I was in the lead and backstroke is a little weaker so I was trying to hide underwater as long as I could. Then breaststroke and then push it as hard as I could in freestyle. I saw myself being first and that pushed me to go even faster.

On the race ending in a tie: Obviously I wish I would have won it, but I’d rather take a win than second place so that’s fine.

On if the race went as planned: Not at all. I’ve been trying to work on my second 25 (yards) and I didn’t quite hit it but I was able to hold the speed I had from the first.

On being an NCAA champion: I feel great. I don’t know what to say. I didn’t expect that. I’m a freshman and that’s awesome.

On winning a national title as a freshman: Oh my God, it’s great. I have three more years.  This is the best.

On his first day: Before this meet people tell you that it’s a lot different than any other meet you’ve been to. Those expectations helped a lot because it is a lot different. It’s a lot more intense. It’s all guys so there’s a lot of testosterone going around. It’s very exciting and emotionally draining. Overall it’s a lot of fun.

On if emotion got the better of him in the 200 IM: Swimming the IM was kind of even more of a mental thing for me. I had a really good swim this morning. I was really excited to get into that top heat and tonight I just wasn’t really feeling it in the 200 IM, honestly. I think maybe getting so high after that 200 free relay did affect me a little bit in the 200 IM but I don’t want to use that as an excuse.

On how he turned it around for the medley relay: Being on relays it’s really easy to get that emotional high, like I was talking about. It was easy to get up for 400 medley and obviously we did pretty good on that.

On his emotions today: Like Ryan (Murphy) said, we got to that high point, especially just walking out in prelims. Looking to your left and seeing all of the parents and fans and some of them dressed as (Cal) Bears up in the stands and then looking to your right and seeing all of these guys, my brothers, who I swim with, train with, live with, hang out with every single day.  You can’t help but swim fast in that kind of environment. We’ve been talking about this all year…just not really worrying about what everyone else is doing and not worrying about outside factors but just kind of doing what we do every day.

On swimming in Austin (as a Texas native): This is the first time I’ve swam in a meet in Austin since high school state. It just brings back a lot of familiar memories. Walking around deck you see some of the guys you swam with at the state (championship) meet and then it’s kind of like you’re bringing your new brotherhood along with you. It’s really special. Just looking in the stands and seeing mom and dad and my sister and then a few other family members, it’s really close to home. I think familiarity is good and it definitely feels good to be back.

On Texas’ diving performance: They’ve worked so hard all year long. With our strength program, we backed off the weights just at the right time. They feel really good right now. Both of them (Michael Hixon and Cory Bowersox) are young and they’re just hungry. They want it bad. They knew it was a possibility and they went for it.

On Michael Hixon only being a freshman: It’s awesome to see young men have the guts to know how great they’re going to do before they even do it.

On Michael Hixon’s work ethic: It’s infectious. He shows up early, stays late. Sometimes I have to tell him, ‘look, you’re done. You need to get out of here.’ The whole team has latched on to that work ethic and it’s the hardest working team we’ve ever had.

On the depth of the team: We feel very fortunate. We’re going to try to keep the momentum going for day two tomorrow.

On winning as a freshman: It’s unbelievable. To have it here at home is so special. The whole swim team around the pool. I cannot describe it.

On if there is a home pool advantage: That crowd has our back right now. That’s pushing us and that’s great. There are a lot of great teams here, so it’s not that much of an advantage.

On Texas diving: We have a goal to be the best diving team in the country. It’s going pretty well right now, I think. We still have three-meter and tower so we’re going to keep proving ourselves. I think it’s a testament to how good coach Matt Scoggin is in this sport.

On what stands out to him from day one: We’re kind of the workhorses. We may not win anything but diving, which we’ve already won. We just keep struggling along. Our overall effort has been really good.

On if he expected to be in the lead after the first day: We know that the only score that matters is when the free relay touches on Saturday night. But I do know that it’s better to be ahead than behind. So divers did a great job. They put us up there.

On the many relay disqualifications in the meet: I’ve never seen, from prelims and finals, I’ve never seen this kind of disqualifications. Personally, I’m not up close where I can see. Usually I’m a pretty good judge. But I would love to see the films of them. But they’re looking at them; the machine’s calling them and you can’t go by people because everything we see that’s a good start within .08 or faster, we call it a false start. They’re on the block, we know that. The machine’s calling it and they’re looking at it on video.  It’s the best way to do it.

On what it would mean to win at home: If we won one here I could turn the guys loose on Saturday night and I can go home, if you want the real answer. We’ve won here and we’ve been crummy here. We’re about equal.

On what he will say to his swimmers tonight: I’m pretty much a logical person so I don’t want to pump them up tonight, you want them to go to sleep. We just talk about what happened and the efforts they made, that kind of stuff. That’s the whole team. When we came in here I said, if the times are good, great. But once you’re racing it’s who gets their hand on the wall first.

why would Quintero say that it was his last 500.. he is only a Junior

There was a swimswam article about it. I think his eligibility ends this year. I don’t quite remember the rules.