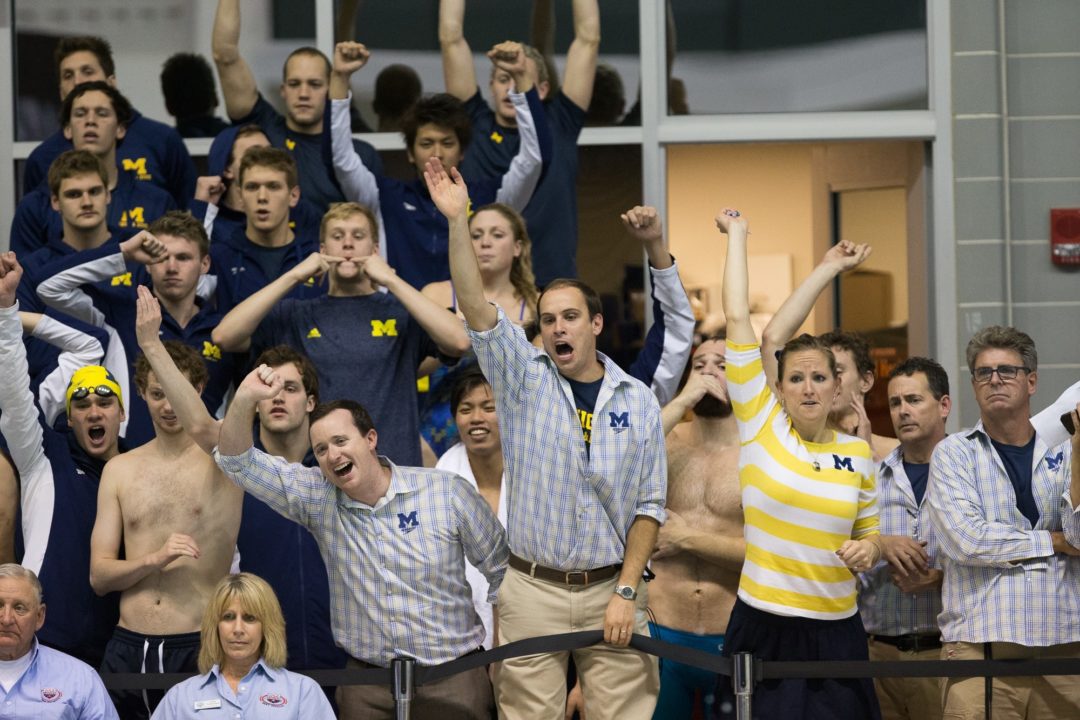 Michigan hit things hard in front of their home crowd at the Big Ten Championships, crushing the NCAA, Big Ten and US Open records in the 800 free relay with a blazing 6:09.85. Archive photo via Tim Binning/TheSwimPictures.com

The second round of college conference championships will kick off tonight, headlined on the men’s side by the return of defending NCAA champs Michigan at the Big Ten Championships.

The Wolverines are also 3-time defending conference champs and will host the meet in Ann Arbor this year as they try to recapture the amazing momentum that powered their stunning post-season run a year ago.

In addition, the Big Ten has become one of the deepest men’s conferences in the nation, with impact swimmers spread out across team lines. Michigan is loaded with stars, perhaps none more well-known than Olympian Connor Jaeger in the distance events. Indiana’s Cody Miller will look to sweep both breaststrokes for the fourth consecutive year as he’s undefeated in the stroke over his first three years at the Big Ten Championships. Ohio State star Tim Phillips is back after a semester training with SwimMAC’s professional group under Dave Marsh. Minnesota’s Derek Toomey is a national title contender in the 50 free after finishing third last year. Wisconsin’s Drew teDuits is the defending NCAA champ in a tough-as-nails 200 back event.

The meet kicks off tonight with the 200 medley relay and 800 free relay, as well as the exhibition synchronized diving event.

Michigan kicked off its title defense with a win over a tight 200 medley relay field. The Wolverines went 1:24.38 to take the event by half a second. Michigan set an NCAA record in the event at the national championships a year ago; this relay was fairly comparable split-wise on three of the legs, despite graduating three-fourths of the 2013 relay. Richard Funk went 23.1 on breaststroke (Bruno Ortiz was eventually 23.0 last year), Pete Brumm was 20.37 (filling the shoes of graduated 19.9-second Sean Fletcher) and Bruno Ortiz went 18.9 with likely plenty more speed to be found down the road (Zach Turk was 18.4 on the record-setting relay).

The spot where Michigan struggled was the backstroke, which has been the question mark this year. Converted butterflyer John Wojciechowski split 21.88, which really isn’t too bad considering Miguel Ortiz was only 21.5 at this meet last year. But Ortiz eventually went 20.8, and that 1-second deficit is the most notable difference between this year’s edition of the Wolverines and last. Even so, Michigan’s time would have sat #1 in the NCAA going into this weekend; as of now it’s second behind NC State’s 1:23.78 from earlier tonight at the ACC Championships.

The battle for second was insane. Penn State grabbed an early lead on Nathaniel Savoy‘s field-best 21.2 backstroke split, but Indiana surged from there on Cody Miller‘s 23.7 breast leg. (Official results list the swimmer as IU freshman Jackson Miller, but it seems much more likely that was breaststroke star Cody than the freshman freestyler). The Hoosiers fell off and Penn State and Ohio State made runs on the butterfly, powered by Shane Ryan (20.3) and Tim Phillips (20.1), respectively. The freestylers dueled with 19-lows before Penn State outtouched the Buckeyes by just .01 for second place, 1:24.89 to 1:24.90.

As good as that 2013 Michigan team was, the 2014 version has found a way to be better in at least one key event. The 800 free relay team of Anders Nielsen, Michael Wynalda, Justin Glanda and Connor Jaeger took Big Tens as an opportunity to not only break the Big Ten record but also the NCAA and US Open records, going an incredible 6:09.85, nearly a half-second faster than the 2009 Texas relay that previously held the mark.

The splits are something else. Nielsen led off in 1:33.52, second-fastest in the field. Wynalda was the jaw-dropper: 1:30.60, which should vault him into NCAA title consideration in the open 200, an event where he finished 5th last year. Glanda went 1:33.26 before Jaeger closed in 1:32.47. The scariest thing about this relay is that these guys could theoretically have more time yet to drop – Nielsen was three-tenths faster at last year’s Big Tens, suggesting he might not be fully rested, and with the way Michigan improved as a whole at NCAAs a year ago, this relay is clearly worth watching moving forward.

The Wolverines won by an unbelievable 9.4 seconds, leaving the field in the dust. Second went to Wisconsin, which got a 1:33.3 split from junior transfer Nick Caldwell and went 6:19.22. That just touched out Ohio State by .07 for the runner up spot. OSU actually led the race briefly, with leadoff man Michael Disalle going 1:33.51 to beat Nielsen of Michigan by .01. The Buckeyes also had a 1:34.5 on the end with Josh Fleagle to go 6:19.29.

After just two events, Michigan already leads by 16 points, with Ohio State sitting second, just two ahead of a Penn State squad that really showed up to swim early. Just two points back of the Nittany Lions is Indiana, and Wisconsin is just two back of them in an already-tight battle for the spots behind Michigan.

I like how Michigan broke both the 200 medley and 800 freestyle relay NCAA/Open records within a year.

Incredible swim. Two NCAA relay records in two years for Michigan, and none of the same names on the two relays. Speaks to the depth of the program. Also, with the exception of Fletcher on last year’s medley, none of the swimmers were high profile recruits coming in. They are developing talent.

Are you being serious?

ya dawg you didn’t hear?

Are you guys serious or are you lying?

No way. Unreal split by Jaeger, that would place at most HS state meets in the 2free relay

Sick username son, mind if I use them in my next song?