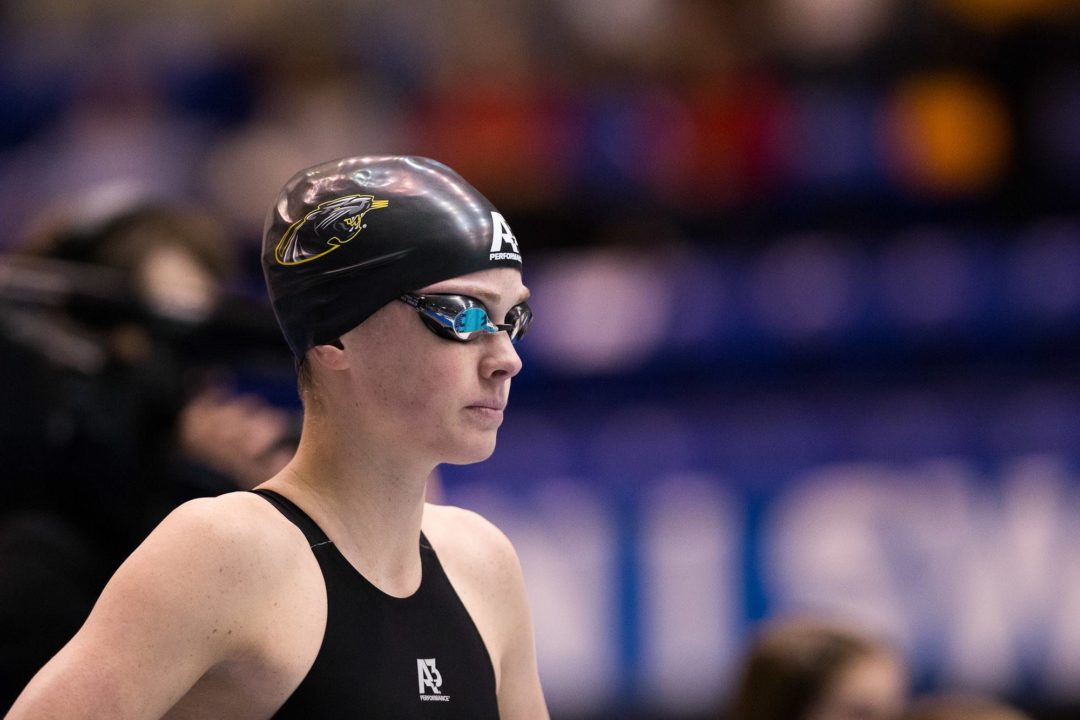 McClellan posts one of the nation's fastest splits so far this year while newcomer, Oakland University, claim two titles on the men's side. Archive photo via Tim Binning/TheSwimPictures.com

The Horizon League Championships got underway tonight in Cleveland, Ohio and what a way to get a conference meet started.  In a conference that may not be as elite as others, day one featured some close finishes, tight races, and new league records.  Unlike the major conferences, the Horizon League features the 1000 free on the first night, alongside the 200 free and 200 medley relay.

The women of Milwaukee and Cleveland State stole the show in the first race of the evening, finishing in a tie.  Both teams touched in a time of 1:32.72.  Alex Johnson of Cleveland State got out to a slight lead, starting with a 23.43.  Sierra Townsend from Milwaukee was able to creep back into first, splitting a 23.03 compared to Christine Kopacko‘s 23.23.  We saw our first sub 23 split of the night on the third leg, Diana Diel of Milwaukee put in a 22.94 to get her team back into first. The anchor leg of Cleveland State, Rowan Elbadry, roared her team back with a final split of 22.71 which ultimately led to the tie between the two teams.  Rounding out the top three was Oakland University with a 1:32.90.

The men’s race was close but didn’t feature two winners.  The top four teams finished under 1:21 with Oakland Univeristy (a newcomer of the Horizon League) leading the way in a 1:20.37.  The squad of Grant Harding, Jeremiah Morren, Tuomas Kiviluoma, and Matyas Keresztes beat out University of Illinois-Chicago who finished second (1:20.61) and Cleveland State third (1:20.69).  It’s worth noting here that Alex Lewis of Cleveland had a stellar lead off leg of 19.56.

The women’s defending conference champion, Milwaukee, picked up their first individual title of the night when freshman Natalie Johnson claimed gold in the 1000 free, touching in a time of 10:03.62.  Johnson finished ahead of Oakland’s Patricia Aschan (10:07.84) and Veronica Gibson (10:12.41) from University of Illinois-Chicago.

The men’s race was won in dominating fashion when Amr El Sayed crushed the field by 20 seconds.  Sayed cruised to victory in a time of 9:00.03, breaking the league and championship meet record by a second. His teammate, Jacob Pearson, made it an Oakland 1-2 finish, touching in a 9:20.88.  Milwaukee’s Tim Halverson rounded out the top three swimming in a time of 9:22.06.

KJ Heger of Milwaukee won the event by a solid fifty points, claiming victory with a score of 344.45.  Cleveland’s Stephen Schillero scored second with 294.50 points while his teammate Danny Roberts followed close behind with a finally tally of 286.50.

The final event of the night featured one of the nation’s top breaststrokers on the women’s side.  Emily McClellan of Milwaukee had the fastest split in the pool, 26.47, giving her team a lead that led to a first place finish (1:40.28).  Coming in second was Oakland University with a time of 1:41.92.  Cleveland fell to third, touching in at 1:43.45.

The men’s race came down to the final leg and could’ve been anybody’s race with 15 meters to go.  The top four teams finished within .33 seconds of each other with Green Bay coming out as victors.  Evan Hill, Ryan Korslin, Cole Hackney, and Ben Loeffelholz surged to the wall first in a time of 1:29.00.  Cleveland State grabbed second in 1:29.13, Wright State touched in third at 1:29.24, while Oakland wrapped up fourth place with a time of 1:29.33.

Hi. Where do you find the results from this Horizon League?