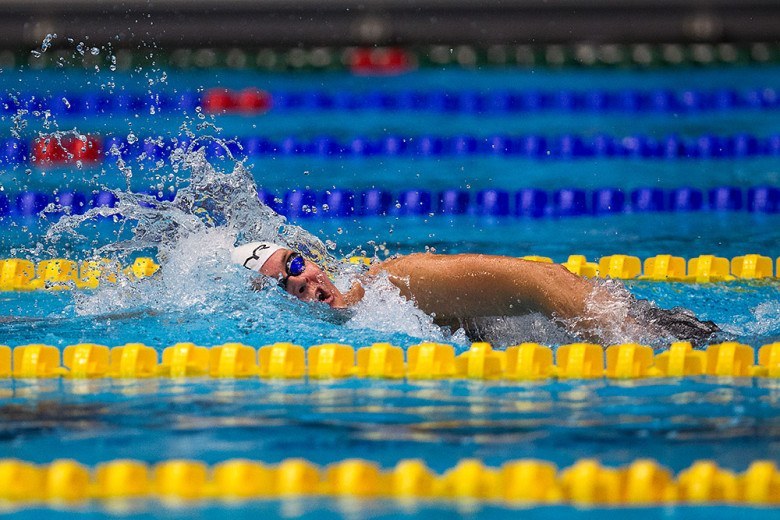 She'll have no Ledecky to race against this time, but Denmark's Lotte Friis, the second-fastest 1500 freestyler in history, will try and put up a big swim early at the Charlotte Grand Prix. Archive photo via Mike Lewis/Ola Vista Photography

The 2014 Charlotte Grand Prix begins on Thursday with a very light schedule (almost light enough to refer to as “day 0”), with the men’s 800 freestyles x 9 heats, and the women’s 1500 freestyles x 6 heats, being the first out of the blocks.

These early races, heated as timed finals, will have plenty of stars worth watching. The women’s 1500 will include European Record holder Lottie Friis of Denmark, Chloe Sutton, Becca Mann, and Gillian Ryan. Also interesting out of that last heat will be Indiana’s Lindsay Vrooman, who will be swimming her first major meet as a post-grad (she did swim a 2:05 in the 200 at “Bucceto’s Open,” a little local meet in Bloomington, two weeks ago).

The session begins at 4 Eastern, and is expected to run until right around 7 Eastern.

With her American rival Katie Ledecky grabbing headlines earlier in the day with her college commitment to Stanford, Lotte Friis fired back with her own headline-grabbing swim to open up the Charlotte Grand Prix. Friis blasted a 16:07.14 to win the first and fastest heat of the timed final event.

That time for Friis ranks second in the world for 2014, behind only Mireia Belmonte-Garcia of Spain. It’s also Friis’ first win of the Grand Prix Circuit after she finished second behind Ledecky at both Austin and Mesa.

Friis will be joined in the world top 5 by the two women who pushed her for the heat and overall win. Becca Mann, recently transferred to North Baltimore Aquatic Club to train with Friis, hung just behind her teammate the whole way, finishing in 16:08.86, now the third-fastest time in the world.

Done with his collegiate eligibility after a highly-successful career at the University of Michigan, Connor Jaeger kicked off his professional career with a dominating win in the men’s 800 free.

The NCAA champ in the mile went 7:58.59 to blow away the field to grab the first men’s event of the Charlotte Grand Prix.

North Baltimore’s Matt McLean, seeded at a yards time, blew away a late heat to move all the way up to second. His 8:03.08 beat every other swimmer besides Jaeger.

Behind Jaeger, a solid battle for second in the opening heat came down to Jaeger’s Club Wolverine training partner Michael Klueh and high schooler and Georgia commit Kevin Litherland. The veteran Klueh came out with the touch, 8:06.18 to Litherland’s 8:06.64. They wound up third and fourth, respectively, after McLean’s swim.

Former Wolverine teammates Sean Ryan and Ryan Feeley dueled for fifth, with Ryan getting the nod at 8:08.30. Feeley went 8:09.03 to take sixth.

Lotte Friis hasn’t swum many beautiful races since she left Fabrice Pellerin last year.
We’ll see in Charlotte but she will have a tough opponent with her training partner Becca Mann who looked very good in Mesa.
I’m still expecting the big breakout swim from Gillian Ryan. Ok, I’m waiting for a long time now. But I continue to believe in her. She won the 800 free US title in 2011! Since then she doesn’t improve. I think she only needs a turning point in her mind, a stimulus to become a world contender. Perhaps it will happen at Michigan. She has a huge motor. It’s all mental in my opinion.

Does anybody else think that NBAC should’ve entered relays. Their 4X200m freestyle relay would be epic with Phelps, Angel, and Dwyer.

And this is hilarious..

Some of those times are completely ridiculous. I’d say the only realistic ones are:

US Swimming needs to work on the ‘there-their-they’re’ problem, too!

Are humans supposed to grow gills and flippers over the next two years? 20.89 to MEDAL in the 50 free. What planet are they from?