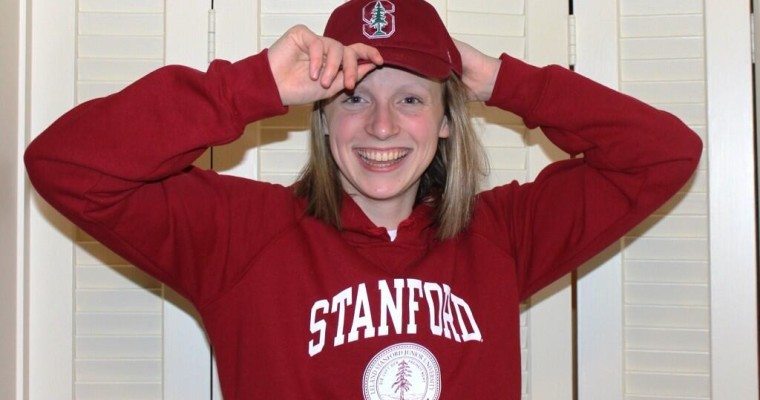 World Record holder, Katie Ledecky, is only a junior, graduating high school in 2015, but has verbally committed to swim in college. Archive photo via Katie Ledecky/Stanford

Olympic gold medalist and 2013 World Champion, Katie Ledecky, has verbally committed to swim at Stanford. Ledecky, a junior, plans to sign her letter of intent in November of 2014, and is expected to graduate from Stone Ridge of The Sacred Heart High School as a member of the class of 2015.

Her list of athletic accomplishments is very long. She was the youngest member of the US Olympic Team in 2012, earning her first Olympic gold medal in the 800 freestyle, with what was at the time the second-fastest time ever swum. At the 2013 FINA World Championships, she won four gold medals and broke two world records. She was also named the 2013 FINA World Swimmer of the Year, USA Swimming’s Athlete of The Year, and the U.S. Olympic Committee Sportswoman of the Year. The last two years she has won USA Swimming’s Phillips 66 Performance of the Year Award.

“I am thrilled to announce that upon completion of my high school education, I am committed to pursue my college education at Stanford and very much look forward to the opportunity to swim for the Stanford Cardinal women’s team in NCAA competition,” said Ledecky.  ” I am very excited about the educational opportunities that will be available to me at Stanford and to swim for its great NCAA program under the leadership of Coach Greg Meehan and Assistant Coach Tracy Duchac.”

Stanford has done very well recruiting the past few years. The 2014-2015 recruits include Simone Manuel, Lindsey Engel, Janet Hu, Ally Howe, Alex Meyers, Heidi Poppe, and a national champion diver, Gracia leydon-Mahoney. That class has a ton of strength and will be very noticeable next season. When you add Ledecky into the mix in two years, in addition to any other elite recruits this team may attract, we could be looking at a new national championship contender.

“Katie’s success as a swimmer and a student are truly exceptional and provides us all with great inspiration,” said Head of School at Stone Ridge Catherine Ronan Karrels ’86. “She has made tremendous contributions at Stone Ridge with her talents, strong faith, self-discipline, courage, and confidence. Katie will surely thrive at Stanford and in her future pursuits. “

While Ledecky’s co-star of the American women’s team Missy Franklin will be turned pro, if she sticks to her plan, by the time Ledecky gets to Stanford, Georgia’s Brittany MacLean, a Canadian and NCAA Champion in the 500 and 1650 frees this season, will be in her senior season, and Virginia’s Leah Smith, who had a great rookie season in 2013-2014 in the distance events, will be a junior. The reality is that Ledecky will be the favorite in the 200-1650 freestyles from day one of her NCAA career, but the quality and depth of the 1650 free in her freshman season could be as good as we’ve seen in the NCAA in a long time, which will hopefully push her to even further success.

This is rather obviously a great opportunity. A Stanford degree is a leg up on life and the connections among classmates and alumni very valuable to her future out of swimming. The women’s coaching staff is as good as she will get in club swimming and the change in venue and training mates only positive in her progression. If she has such tremendous success at the 2016 Olympics that her commercial value is to rewarding to pass up to maintain her NCAA eligibility then she can deal with how to proceed then rather than close this door now. Taking this option is an example of just how smart a young lady she must be.

looking at this after being gone for a few days…

First of all, I’m pretty sure Katie reads swimswam. And I think it’s the constant arguments/speculation of where/whether she should go to college, that she is trying to stop by making this announcement. (I admittedly speculated as well…)…but even with a college decision, there’s now discussion about whether she made the right decision. She and her family know what’s best.

Second of all, the speculation about Stanford’s “early acceptance” being unfair is ridiculous. (And I speak from the perspective of someone who attended a top 5 school…and was not an athlete…and only graduated within the past couple years).

Look at that… Read more »

As Gordon Gecko said, “if you’re not on the inside, you’re on the outside.” Experience, inquisitor, experience. I’ve been there many times, and I know.

She is Janet Evans at her prime, plus at least 4 more years to reach hers.
And don’t believe everything you read about college admissions (except for maybe CalTech and MIT). If some of the “exclusive” schools opened their evaluation notebooks, there would be a lot of dropped jaws.

” If some of the “exclusive” schools opened their evaluation notebooks, there would be a lot of dropped jaws.”

So apparently you have seen their notebooks – so please share particulars (or quit acting like you know something when you don’t).

I agree that Ledecky is a Janet Evans-level athlete. My point was that if people like Evans and Tiger Woods didn’t get this “early early” deal (and I don’t know whether they did), then Stanford appears to have dialed back its commitment to the “student first, athlete second” ideal. It wouldn’t be the end of the world, and perhaps market conditions have changed in a way that justifies it. I just wondered whether this is a new practice for Stanford.

As I mentioned above, this is not a new practice for Stanford. I don’t know how many years it goes back, but Admissions has long allowed exceptional Football and Basketball players to be reviewed as early as their Junior years so that these players can give Verbal Commitments and these teams can compete in these more aggressive recruiting environments. I don’t know why the same arrangement couldn’t be made for a swimmer of Katie’s caliber.
Like all admissions, even Early Action that many non-athletes go through, the final enrollment is always provisional on the student continuing the same level of success through the end of her senior year.

Thanks for the explanation

I’m trying to figure out why my prior comments are gone – other than a political tirade reply I think it’s a fair topic to compare the decision to go pro (at 14) against the decision to go to college. I may not be a regular poster but I’m a regular reader. The Ledecky decision is an interesting contrast to the value of an age group NAG

Homer – we explain this to every new commenter who gets upset because they think their comments are getting deleted, but here goes one more time. All new commenters go into a moderation cue. This helps protect us from spam. These comments are approved as we’re able to get to them, which is not always instantaneously, especially during busy periods where there’s 8 meets going on. Once you have your first couple approved, so long as you keep using the same user name and email address, they will be available immediately.

It continues that young swimmers don’t really look around at other schools. No imagination.

I honestly thought Ledecky was going to go to Cal so she can train with the coach who made her Olympic debut, Yuri Suguiyama… Guess not. But regardless, congrats to the Katie on Stanford!

Yuri is an assistant for the men’s team so Katie would not be able to practice with him. I don’t think the Cal teams do any combined training.