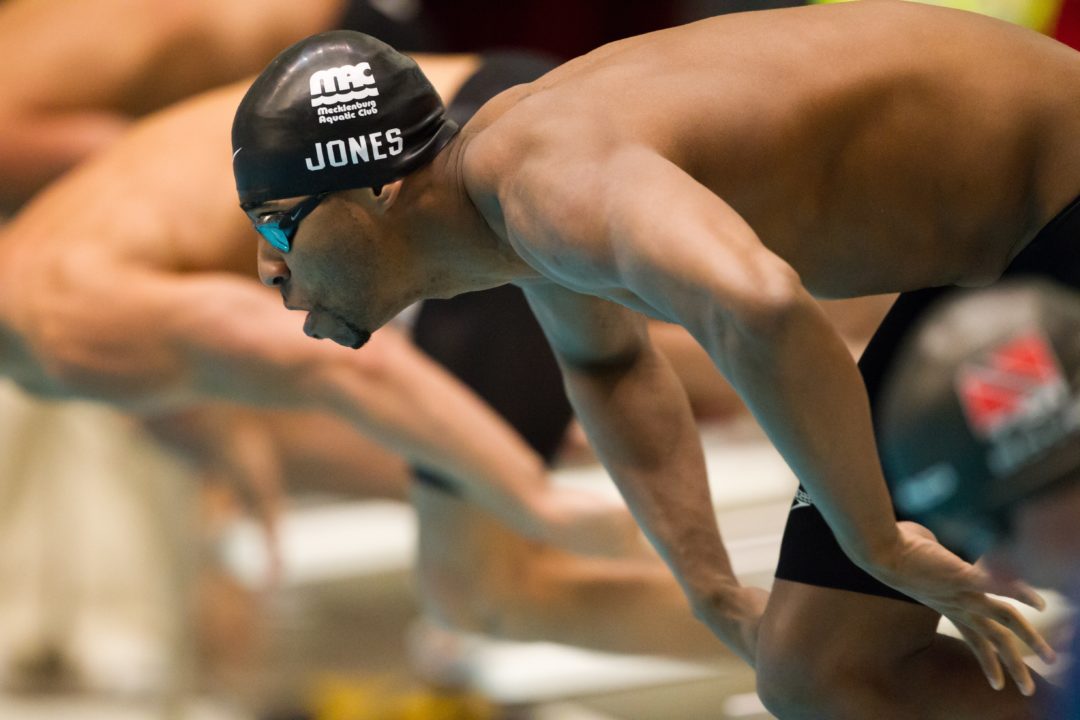 Cullen Jones was a medalist in the splash-and-dash a year ago in London. Can he shake off the post-Olympic cobwebs and do it again?

Once the dust settled on the Olympic Games last summer, there were big questions about the future of American men’s swimming on the international stage.  London looked to be the last competition for a number of household names (including Peter Vanderkaay, Jason Lezak, [the now-unretired] Ricky Berens, Brendan Hansen, and that Michael Phelps guy), and it looked like there would be some massive shoes to fill across the board. Top to bottom, though, one event that went unscathed for the men is the one we’re covering today, the men’s 50 freestyle.  Seven of the top eight from last years Olympic Trials, including the 1-6 finishers overall, are back for another go-round this summer (the only one who doesn’t look to be competing is Adam Small, as he has yet to swim since December).

Leading the way for the U.S. last summer was perennial international sprint contender Cullen Jones.  After looking like he may have plateaued for a few of years, Jones elevated his game to another level at Olympic Trials to qualify individually in both sprint freestyles, and then stepped up again in London, claiming silver in the 50.  While Jones has been known to disappear from the pool for a while after big meets, he appears to be back in the swing of things, swimming his fastest ever non-super-suited untapered 50 free at the Charlotte UltraSwim earlier this month.

Jones’ biggest challengers will be Cal training partners/Olympic gold medalists Anthony Ervin and Nathan Adrian.  Widely considered to be one of the most talented sprinters of all time, Ervin finished fifth in London last summer in the 50, despite having spent the majority of the previous decade away from the pool.  His strong performance at the World Short Course Championships last December (gold on the 4×100 free relay, bronze in the 50) showed he wasted little time after the Olympics and is ready for more.

Despite being a near-consensus choice to qualify in the 50 last summer (he was the top seed at Olympic Trials by almost a half second), Adrian was shut out of the team (and a likely Olympic medal) in this event by Jones and Ervin.  Ten months removed from London, Adrian is back in a familiar spot; he’s the top American in 2013 by 0.31 seconds, and is ranked third in the world overall.

Another pair of familiar names near the top of the psych sheet are Longhorn Olympians Jimmy Feigen and Garrett Weber-Gale.  Following his seemingly other-worldly high school times back in 2008 and an incredible freshman season at Texas in 2009, Feigen set himself up for incredibly high expectations, with followers everywhere anticipating continued improvement for the guy who looked like the next great American sprinter.  After a couple of lukewarm seasons, he had a great 2012, capturing individual NCAA titles in the 50 and 100 free, and then qualifying for his first Olympic team.  Feigen has set himself up to build on that momentum by qualifying for another international team; he is the fourth-ranked American in both sprint freestyles so far in 2013.

Weber-Gale is looking to bounce back from a disappointing year (he finished a heart-wrenching seventh in the 100 freestyle… the top six got spots on the Olympic team) by grabbing a World Championship team spot in Indianapolis this June.  Last summer was the first time Weber-Gale was not a member of the America’s biggest international meet (Olympics, Worlds, or Pan Pacs) since the 2006 Pan Pacific Championships.

Josh Schneider, probably the clearest “drop-dead sprinter” in the entire field, is back again.  He made big strides in 2012: he cut almost a half second off his previous lifetime best in the 50 at Trials (although he had to settle for fourth place in a very fast field), and gained some valuable experience at the Short Course World Championships this December, finishing sixth in the 50.

Better known as a superb backstroker, Matt Grevers has also repeatedly proved to be a world-class sprint freestyler.  He’s been a member of the last two Olympic 4×100 freestyle relays for Team USA, and has been on the cusp of an individual team spot in the 50 for years, including a sixth place finish at Trials last summer.  Grevers looks to have more speed than ever; he swam a lifetime best 18.88 in the yards version of this event at Winter Nationals in December.

Plenty of athletes still competing in the collegiate ranks have a chance to make a splash, as well.  Derek Toomey had a huge breakthrough short course season in his junior campaign at the University of Minnesota, cutting almost seven tenths from his previous best time to finish third at NCAA’s.  A parallel drop in the long course tank would put him in the 22-low range, which could earn him a spot in the A Final in Indianapolis.  Brad deBorde has made consistent improvement over each of his three years with the Florida Gators, posting lifetime bests at NCAA’s this year in the 50 and 100 freestyle.  He narrowly missed the semifinals last year, but with semifinalists Alex Coville, Michael Richards, Nick Brunelli, and Will Copeland out of the picture, deBorde has good odds to finish in the top 10 with a solid swim.

Cal Bear teammates Seth Stubblefield and Shayne Fleming could make things interesting, as well.  It’s tough to say where Stubblefield is at right now; he was kept out of the pool for a long period last spring/summer due to an injury and illness, and he has yet to compete in a USA Swimming meet this year.  We’ll know more this weekend after Santa Clara.  Fleming narrowly missed out on a finals spot at Trials last summer, finishing 10th in this event.  Both guys were All-Americans for the Bears in the 50 this past short course season.

For those counting at home, we’ve actually only mentioned seven of the eight Trials finalists so far.  The last one, Ohio State’s Jason Schnur, was one of the bigger surprises in Omaha a year ago.  Schnur cut well over a half second off his previous best time in the semifinals to qualify sixth (he ultimately finished eighth in finals).  He was a bit off the entire short course season, so we’ll see if last summer was strictly a fluke, or a sign of better things to come.

And now for the picks…

Schneider and company will be behind these guys.

I would say only Adrian Ervin and Jones

I´va been reading about Feigen for some years already and he did not yet lived up to the fame he have..

Rafael – I wouldn’t write him Feigen’s career off yet. It feels like his development is slow because he was SO good as a high school swimmer, but he was 21.89 as a 22-year old last year. This is right when American sprinters usually pop (not quite as young as we see other places.)

And Feigen won an Olympic silver medal, not many people can say that.

I am not saying his carrer is off.. but even being pretty good.. his good might never be good enough for an OG individual..

Philip Having a Silver Medal is amazing… but unless its individual.. I would really not rate that near as close an Individual.

There are plenty of swimmers who only have bronze or Silver individual events.. but they are on a higher level than guys who won Gold as relayers..

And Caeleb Dressel. Never count him out. He broke 20 seconds in short course, and generally performs as well or better in long course.

Clearly the best American hope on sprint. His PB is 23.37 and he has swum it recently in Charlotte. Very promising for the summer. I think his first goal must be to break the 23 barrier. The 15/16 NAG record is 22.72 by Shayne Fleming.

How old is Caeleb?

Will the trials be valid for Junior worlds? Will US send their best juniors? Cause based on other countries.. JPN BRA AUS the field is LOADED would be good if US also sent their best youngsters

He swam faster than that pb in practice last week….

Nathan Adrian and Anthony Ervin are my picks. I thought Cullen Jones would be out of the discussion after his break and in Charlotte he comes back and swims faster than last year at the same meet. Having said that, I still go with the 2 Cal swimmers.
About GWG, I have read he will swim in Indianapolis but will not swim in Barcelona even if he qualifies. He will swim at the Maccabiah Games.

Tyler Messerschmidt is also back at Cal so that’s someone else to consider for a semifinal spot.

No semifinals at these world trials. Prelims in the morning and finals in the evening.