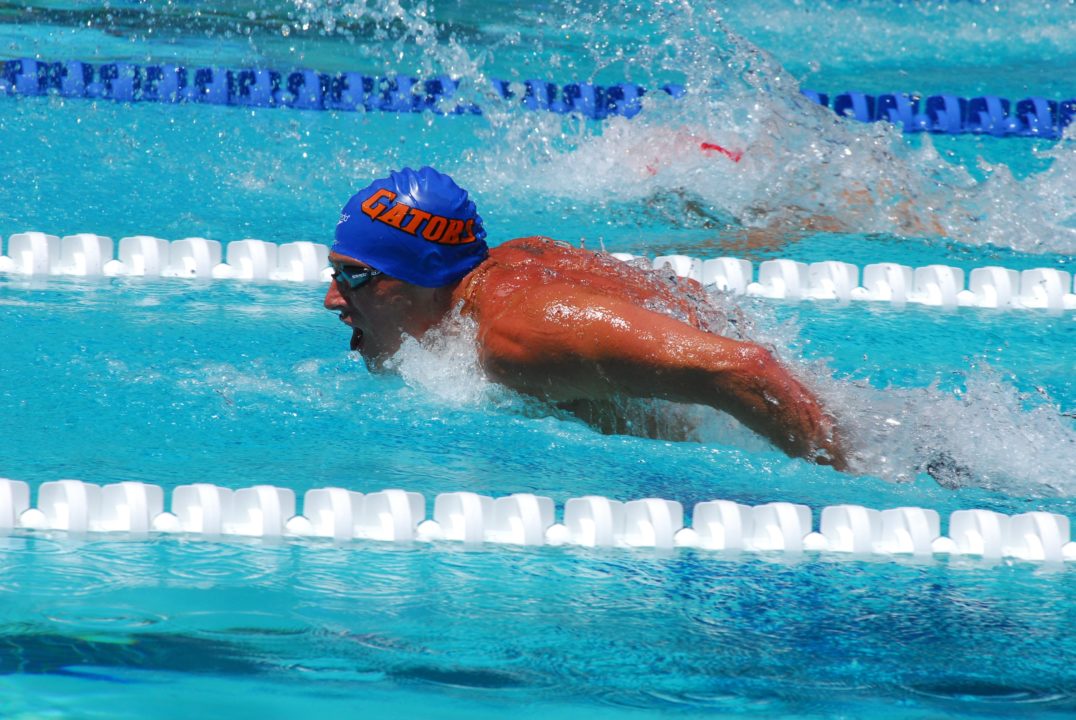 Day 2’s prelims session at the 2013 Santa Clara Grand Prix started off with perhaps the two best races of the meet: the men’s and women’s 100 freestyles, and California Aquatics’ Natalie Coughlin continued to show good things in her new freestyle-focus.

Those two will both likely be able to drop some in finals, if history serves, and they should be challenged by Georgia’s Megan Romano and Australian 18-year old Brittany Elmslie, who tied for 3rd in 55.32.

Elsmlie made the A-Final, while her countrymates Ellese Zalewski (55.78) and Emily Seebohm (55.84) slid down to a B-Final that will be just as yoked, with names like Olympians Dana Vollmer, Shannon Vreeland, Jessica Hardy, and Chantal van Landeghem (Canada) all down there as well.

That’s Dwyer’s first time ever under 50 seconds in this event. He’s been training with Bob Bowman at the Olympic Training Center in Colorado Springs for the last two weeks; this is something we often saw from Phelps training with Bowman, coming down from altitude and putting up really good times. That’s a phenomenal swim, and maybe gives him some credibility as a member of the 400 free relay for this summer’s World Championships.

Ryan Lochte is the 6th seed headed into finals in 50.05, which is a solid swim for him as well.

The World Record holder Cesar Cielo from Brazil didn’t swim this race, but two of his teammates made the A-Final: Nicolas Oliveira (49.83) and Fernando dos Santos (50.43.)

Later in the session, Dwyer would take the 2nd seed in a more traditional event for him: the 400 free. There, he was a 3:53.38 to sit 2nd behind Canadian Ryan Cochrane, who in 3:49.81 had a better swim than he did in the 800 on Thursday night. Behind Dwyer in the 3-4-5 positions are a trio of Michigan-based swimmers: Connor Jaeger, Club Wolverine post-grad Michael Klueh, and Anders Nielsen. All were 3:53’s.

The American-leader this season is Andrea Kropp at a 2:27.0, and there have been a few 2:27’s in the last month, so expect times to get down a little bit in the final.

The top seed in the men’s 200 breast went to Arizona’s Kevin Cordes, who was a 2:12.99. That’s easily the fastest he’s been in-season (by a second-and-a-half), despite what Arizona sources described as him being in heavy training. His swims, being the first in long course since his record-crushing NCAA Championship meet, probably have the biggest global impact, and this is an impressive first sign. With that swim, and his typically big taper, a 2:09 or 2:08 are well within reach for the summer.

Nothing too special happened in prelims of the 100 fly; the World Record holder Dana Vollmer took the top seed in 58.77, with Greece’s Kristel Vourna in 2nd with a 59.69. The only other two under a minute were USC sophomore-to-be Kendyl Stewart in 59.71, and Canadian Audrey Lacroix in 59.83. In total, four countries were in the top six prelims swimmers: this is why the meet is called the “Santa Clara International.”

And finally, the session ended with the men’s 100 fly, where Ryan Lochte swam a 52.69 – another surprisingly-fast Florida swim. That mark is within a second of the time he went at Trials last year, and is easily the fastest that he’s been in 2013. Lochte has talked about disappointment in his results after the last few meets (he didn’t swim the 100 fly in Canada last weekend), but it seems as though he might be singing a more positive tone after his early results in Santa Clara. The Gator guys, at least, may have gotten a little bit of a training reprieve with all of the travel.

Lochte wore a jammer, in stead of his usual brief, so this could be a bit of a “test-and-see” meet for him a month out of Worlds Trials.

Conor Dwyer has actually been training in Colorado with Bob Bowman the past 2 months or so. Don’t be surprised if the move becomes permanent in the near future.

You’re right Robert, had totally forgotten about that.

Any news on that?
From twitter and instagram I’ve seen he’s up in Baltimore now, and is staying in Phelps’ house of all places!

Super speed for Caughlin ! She is allready in pretty good shape . Kevin Cordes demonstrates he is also in good long course shape .

Dont underestimate young Mr. Prenot. He is amazing and always off the radar.