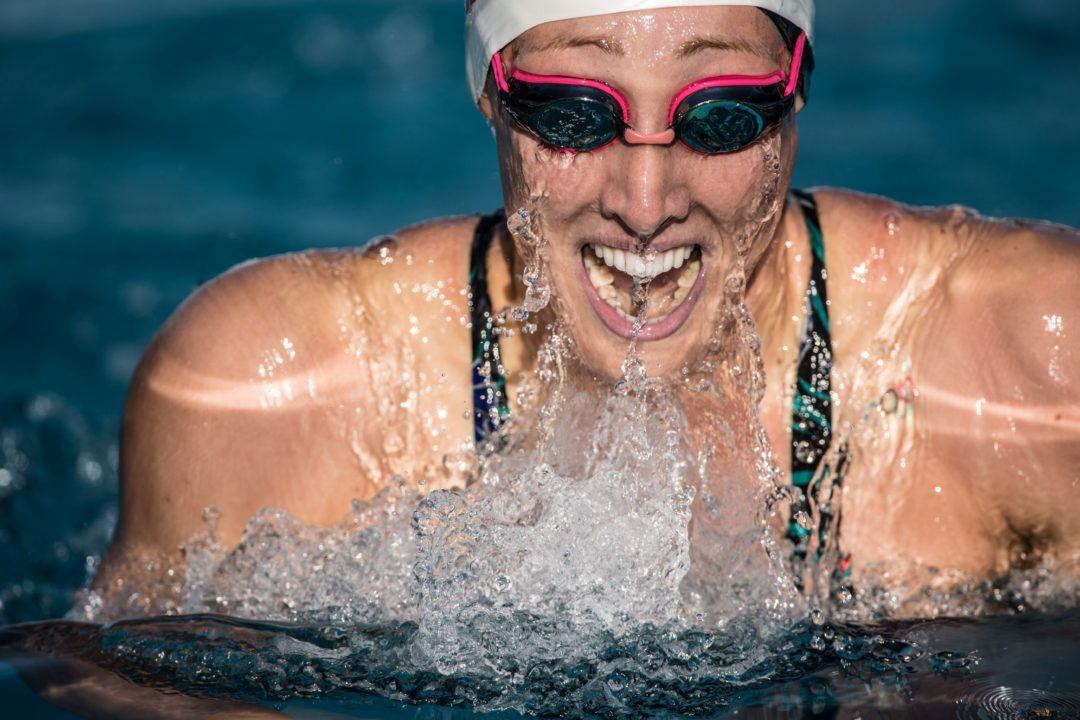 Breeja Larson, who won three straight NCAA titles in the 100 breast and a gold medal with Team USA as part of the 400 medley relay at the 2012 London Olympic Games, announced today that she is retiring from competitive swimming.

It is with a celebrating heart that I’m announcing my retirement from professional swimming. This was not a decision I took lightly, but through a lot of introspective thought, consideration, and weighing of opportunities, I feel at peace with my decision. I stopped training as heavily in December and found that I am much more excited and driven by opportunities presenting themselves outside the pool. I still love the sport and will stay closely connected💙. Of course there was a lot of heart ache through the pandemic that contributed to this path, but through therapy and help from many I have found my spark again. I wish for all athletes who have gone through the same path at this time to understand that your worth is not connected to your performance. You are valued for so much more than just how your body competes. Never forget that. Don’t allow the media or outside opinions make you feel less than for personal choices you make or how you end up performing.

I wish everyone competing at US Olympic trials and the Olympic Games the best of luck! I will continue to be here as mental/emotional support for those who need it. ❤️💚🖤💛💙

In the post itself, Larson describes how she started swimming club at 17, then flourished under Steve Bultman at Texas A&M.

I was so fresh to the sport that I learned how to swim butterfly and hold my breath for a full 25 (yards) underwater after I signed with Texas A&M and walked onto the pool deck as a freshman Aggie. Steve took a leap of faith when recruiting me and showed quiet but powerful confidence in my potential.

She continued to describe how the process behind the swimming career will be what pushes her forward into the next stage of life.

The last nine years of competing at an elite level, I have found my passion for mentoring young athletes, giving motivational workshops for sports clubs and business corporations, and running swim technique clinics.

While Larson has spent time mentoring athletes, as she mentions above, and offering her experiences on AirBnB Experiences, as she discussed on the SwimSwam podcast, her Instagram post today reveals that she plans to focus on a career in real estate.

Larson was a multi-sport athlete in high school, and didn’t really begin to focus on swimming until she was 17. After graduating high school in 2010, she headed to Texas A&M for college, as she mentioned in her post. After taking 2nd in both breaststroke events her freshman year, she then rattled off three-straight titles in the 100 breast the following three years.

She also developed quickly on the long course side of swimming. At the 2012 Olympic Trials, she upset favorite Rebecca Soni to win the 100 breast in 1:05.92, earning a spot on the USA Olympic team. She finished 6th in the 100 breast at the Olympics, and swam in the prelims of the 400 medley relay, earning a gold medal.

In the years since then, Larson continued to be one of the fastest women in the country in the 100 breast, and while she didn’t make any more major international teams, she was still a fixture at Pro Swim Series, US Nationals, and World Cup meets. Per the USA Swimming database, her last meets appears to have been the 2020 Des Moines Pro Swim Series stop, just weeks before the pandemic put swimming on the back burner worldwide.

She is one of a number of major U.S. swimmers who have announced that they will either retire or not compete at the U.S. Trials in the last few months. That includes Lia Neal, Ella Eastin, Margo Geer, Ian Finnerty, and Jacob Pebley.

WAIT WHEN DID I MISS THAT JACOB PEBLEY RETIRED WHAT

Pebley not retired. Decided to forgo OTs this year. He had a very good post about it I believe yesterday.

She changed what I thought was possible in SCY breaststroke. Lilly King ended taking it to a whole different level but the breakthroughs Breeja made were huge. Congrats on a great career.

When she set the American Record in the 100 breaststroke in 2012 at the Phil Hansel Invitational was the moment I realized that it was unsustainable to leave social media notifications turned on for SwimSwam. It literally froze my phone for 20 minutes.

I just love that cover shot of Breeja. Kind of looks like she is smiling, and you could do a pretty thorough dental exam from that shot…

Pandemic took its toll and some of the elite swimmers lost their interest and mojo.

After the Olympics and Olympic Trials there will more retirements and Goodbye to Swmming posts on Instagram.

It will be interesting to see if there are more or fewer retirements after the Trials and Olympics this year compared to previous post-Olympics years. On one had the pandemic has taken a toll. On the other, swimmers get another shot in 3 years instead of 4, and they have the option of doing ISL. There might be fewer than typical because of that.

I did not know that she started swimming competitively at age 17. I retired at age 17.

She can hold her breath for 25 years underwater?!

she could not hold her breath any longer so it is time to retire.

Pretty sure, she meant yards; typo or autocorrect perhaps?

Congrats on a beautiful career.

One of a handful of women swimmers to put A&M women’s swimming “on the map”👍👍. Lot of credit goes to Steve Bultman & staff for the development of these women. Wishing her the best in the real estate market!!