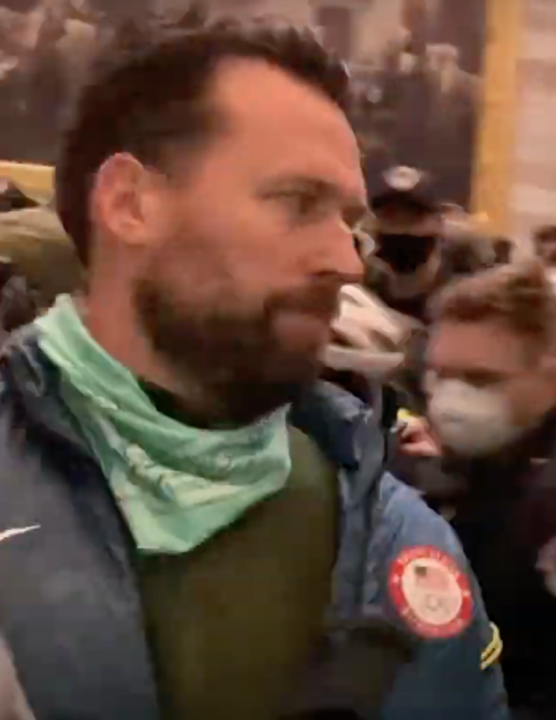 U.S. Olympian Klete Keller and the U.S. Department of Justice are discussing a plea bargain for Keller's role in the January 6 riot at the Capitol. Archive photo via video screenshot from Townhall Media

U.S. Olympian Klete Keller and the U.S. Department of Justice are discussing a plea bargain for Keller’s role in the January 6 riot at the Capitol.

Keller, a three-time U.S. Olympian, was identified in video footage among a group that broke into the United States Capitol Building and clashed with police on January 6, 2021.

On January 6th, supporters of President Donald Trump, who lost the 2020 presidential election, broke into the United States Capitol Building and clashed with police. The riot happened as Congress was tallying electoral votes in last November’s election, in which now-President Joe Biden defeated Trump. Five people died or were killed amid the mob, including Capitol Police Officer Brian Sicknick.

Multiple people within the swimming community identified Keller in video footage of the mob of people who had broken into the Capitol Rotunda. The 6’6″ Keller stood out in videos due to his height, and because he appears to be wearing his U.S. Olympic gear in the video.

Keller was indicted on seven charges for his role in the riot, including:

In March, Keller pleaded not guilty to the charges. But new court documents filed today show that Keller has been discussing a plea agreement in the case.

Prosecutors filed a motion – unopposed by Keller’s defense counsel – to delay proceedings against Keller. Prosecutors cited the vast scale of charges being brought against Capitol rioters, calling it “the most complex investigation ever prosecuted by the Department of Justice.”

But the document also says that “the parties have also begun discussing a potential resolution of this case and need more time to continue those discussions.”

Court records show that the motion to delay the proceedings was denied by Judge Richard Leon, but the motion is still notable in its revelation that both sides have discussed a settlement. The two parties have a videoconference scheduled for this afternoon with Judge Leon.

That sure would be detrimental to his case.

And even if there was I’m sure he’d be smart enough to wear a mask. I’m mean there is just no possible way anyone could be dumb enough to commit multiple felonies in the middle of a pandemic bare faced.

“jUsT oBeY tHe LaW aNd yOu wOnT geT ArReSTeD”

Considering the way the country is now being run, they should just drop the charges and give Klete a medal…

ray looze should be president!

I’ll vote for that!

When are the kavonaugh rioters who raided the capital going to be jailed? That’s a threat to democracy just as much as this is.

One. Learn how to spell the guy’s name. And two, there were no riots.

There were rioters that broke into the building when hearing wete being held. Not hard to look up.

“you put an o instead of an a, therefore you argument is invalid” 👏
I personally think neither of the incidents are worthy of the term riot, but they’re effectively the same thing so I’ll use the media’s term.
Kavanough riots, literally the first google article:
https://www.nbcnews.com/politics/supreme-court/protests-build-capitol-hill-ahead-brett-kavanaugh-vote-n917351

Thanks for the link. You should try reading it. In that case, the protesters did not get into the building. They got past 1 police barricade and got up the steps to pound on the door but as the article says “Police eventually were able to form a line between the door and the group of protesters and later shepherded them back down the steps before erecting a barricade.” So no, it’s not at all the same thing. They did not smash windows, steal items, or defecate and urinate in the building.

Swimswam, can you not post obscenely left wing propaganda? This article is full of half truths and misrepresentions.
Like:
“including Capitol Police Officer Brian Sicknick.”
He died, God rest his soul, of completely unrelated causes, not some act of violence like this is trying to portray.

I’m sick and tired of seeing the media portray the lefts riots (which killed far more and left billions in damages) as some sort of amazing protest for freedom. Swimswams pro BLM articles are glorifying far worse actions. While a protest from the right is considered high treason. It’s frankly disguisting. If this is high treason, then BLM is genocide. Plain and simple.

Awww do you need a safe space lil fella?

Swimswam, could you ban this troll?

How is he a troll? He is expressing his point of view. All you should do is either agree or disagree. Why do you think an opinion different from yours should be disregarded?!

Because the rest of the country is tired of your pathetic “Fake News” schtick in an effort to stir up outrage among the deliberately ignorant. If you don’t like it here, go clutch your pearls over at frankspeech if you’re looking for a right-wing echo chamber. Enter promocode “RUDY20” for a free MyPillow while you’re there.

“Enter promocode “RUDY20” for a free MyPillow while you’re there.”. Fake news. I tried it. It didn’t work.

Man does make a good pillow though.

““Enter promocode “RUDY20” for a free MyPillow while you’re there.”. Fake news. I tried it. It didn’t work.”. Fake news. I watched him too it when I was spying on him and it did work.

I’m not tired of it. I laugh at right wing Americans every day. It is an endless supply of priceless ignorance and stupidity. I used to obliterate my right wing teachers in high school and college. The same pathetic caliber is represented here. It is hilarious that they blabber among themselves and somehow don’t understand that level will be laughed out of the room in any competent gathering

Right wing teachers in college is like saying fauci’s truths. Both don’t exist!

“Some act of violence like this is trying to portray”

The quote: “died or were killed, including capitol police officer Brian sicknick”

Did officer sicknick not die? How is it misrepresentation to say he died? 5 were killed or died. He falls under the died category. Or is reporting facts left wing propaganda?

Being murdered vs dying of natural causes are not anywhere close to being the same thing so why would you lump them together in the same sentence?

Sicknick was sprayed twice in the face with bear spray on January 6th. He had a stroke and died approximately 24 hours later. The medical examiner said that “all that transpired played a role in his condition.”
So in answer to your question, that’s why.

52
-8
Reply
The facts
Reply to  BearlyBreathing

Oh yeah here we go… everyone that isn’t crazy far left is racist.

Guerra what does the goat Ray Looze think of your right wing diatribes?

I’m not really that crazy about politics, to be honest with you. They all seem to be liars and use their respective media partners to spread fear, which in turn causes hate. As a person that identifies as a traditional Democrat, I’m utterly disgusted with the state of the party right now. So I guess I’ll just have to be canceled and called a Klansman…

The GOAT (Ray Looze) and I have discussed some of these matters and he is on the side of peace, tolerance, forgiveness and harmony.