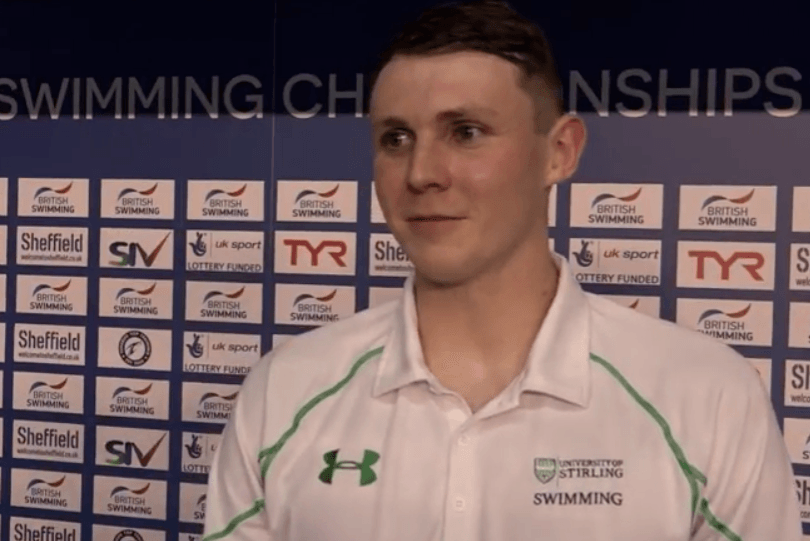 While competing on the 4th night of the 2017 British Swimming Championships, University of Stirling’s Ross Murdoch made it onto the top of the podium in the men’s 200m breaststroke. Clocking a swift winning time of 2:09.15, the 23-year-old was able to clear the British Swimming consideration mark for the World Championships, along with already nabbing silver in the 100m breaststroke event, making it likely he will be on the Budapest roster.

After watching his race video below, listen to how Murdoch describes his tough journey from winning gold at the 2014 Commonwealth Games through now. He says he is looking forward sharpening his skills even more over the next 14 weeks after taking a post-Rio break. He also says he is committed to Tokyo 2020.

2014 Commonwealth Games champion Ross Murdoch is back on top in this event after placing 3rd at both the 2015 and 2016 British Championships. Letting Charlie Attwood and Andrew Willis lead through the first 75m or so, Murdoch hit the gas and didn’t look back, ultimately touching in 2:09.15, the only time under the 2:10 threshold.

The 23-year-old’s 2:07.30 from Glasgow in 2014 remains as the British national record, but Murdoch seemed pleased with his effort tonight, saying post-race that he ‘was in a bad way after Rio’ and had to take some time off. His time tonight falls within the consideration standard, as did his 1:00.00 silver medal-winning 100m breaststroke time here in Sheffield, so we’ll see how coaches discretion comes into play with Murdoch’s potential roster spots.

James Wilby matched his own personal best from 2016 with his 2:10.01 time tonight, while last year’s gold medalist in this event, Andrew Willis, was downgraded to bronze this time around. 2:10.52 is what Willis was able to produce against this tight field. Willis was the 4th place finisher in Rio with his monster time of 2:07.78.