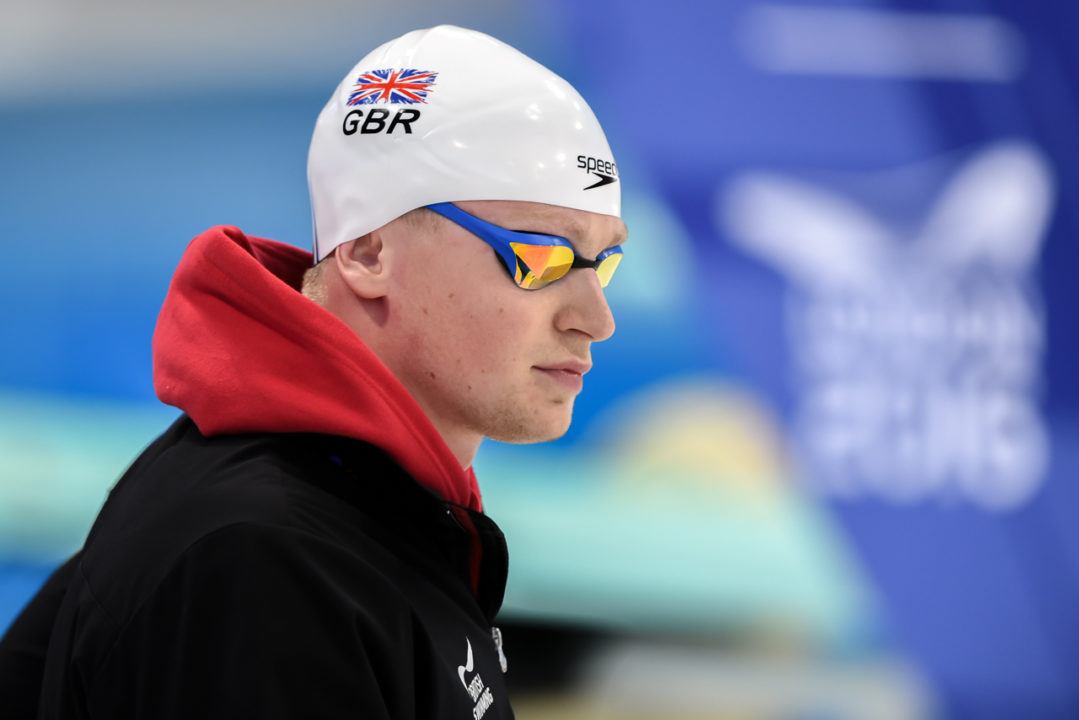 Adam Peaty was one of 5 British swimmers who earned automatic qualifying times at the British Championships. Archive photo via Peter Sukenik/www.petersukenik.com

By the end of the 6-day 2017 British Championships, just 5 swimmers notched times falling under the stiff British automatic-qualifying standards for first-place finishers to make it onto the World Championships roster. Adam Peaty was virtually a given in his specialty, the men’s 100m breaststroke, but the remaining athletes all fought hard for their roster spots, each clocking new national records in the process.

Jocelyn Ulyett was a break-out star in the women’s 200m breaststroke race, while Max Litchfield lit things up in the 400m IM. Ben Proud and Duncan Scott manhandled the sprint freestyle events, with Proud racing to a new world #1 in the 50m and Scott becoming the first British man ever under 48 seconds in the 100m distance.

The aforementioned all lead the 29-strong British roster for the 2017 World Championships, a line-up that includes both seasoned veterans and up-and-coming athletes. James Guy, the reigning 200m freestyle world champion, collected a remarkable 4 gold medals in Sheffield, but remarkably fell short of the automatic qualifying time in each. The same held true for Olympic silver medalist Siobhan-Marie O’Connor, who was disqualified in the 200m IM, but notched a consideration time in the 100m breaststroke.

Newcomers Freya Anderson, the 16-year-old who won the women’s 100m freestyle, as well as Isle of Man 200m butterfly champion Charlotte Atkinson bring new blood into the fold to mix with the likes of stalwarts Chris Walker-Hebborn and Hannah Miley.

Notable names missing from the Budapest bunch include 2016 Olympians Dan Wallace and Chloe Tutton, as well as freestyler Jay Lelliott

Regarding the line-up, British Head Coach Bill Furniss said, “It was a tough week but we saw some very good performances as both athletes and coaches rose to the challenge.

“I think it was a typical first selection competition following an Olympic Games. Some of our athletes that were successful in Rio, and had an extended break afterwards, did well yet others did not fire on all cylinders. This is to be expected.

“However, we’ve got all of our top swimmers there along with an exciting group of juniors that came through and showed themselves and their potential to achieve within the international arena. It’s a good balance between youth and senior, and will create a positive and productive dynamic within the squad.

“The selectors were pleased that so many swimmers achieved the qualification or consideration time,” Furniss added. “We set difficult standards but these reflect what we’re trying to do in British Swimming and what is required to be successful. To see so many swimmers achieving these times is very encouraging.

“The high number of records achieved last week didn’t surprise me. If we are to compete on the world stage you have to show continual improvement and that is what we saw at the Championships.

“We’ve already got one eye on Tokyo and therefore we want to introduce that next generation of elite swimmers to world-class arenas. They did a good job in putting themselves forward but now the work starts again as we build towards the World Championships in Budapest in July.”

The athletes above gained selection after they won their event and achieved the qualification standard at the British Championships 2017 as per Table 1 of the selection policy.

The athletes above gained selection at the discretion of the GB Head Coach and National Performance Director. The criteria for these decisions included provision of relay cover and alternates to rest key athletes that have large schedules; potential to make the Tokyo 2020 Olympic team; individual performances over the last 12 months and performances at the British Championships 2017.

Coaches selected to the British Team for the World Championships are:

Team GB is making their move. They had plenty of finalists in Rio. They had one gold and 5 silver medals.

I Think apart from US, China, Australia, JPN and GBR are on equivalent level.. and there is Also Hungary With Hosszu, Cseh and Kenderesi..

USA, on pure depth and spread of talent, are light years ahead of the rest of the world.

As for the “pecking order” amongst the “second division”; it will depend on whether you rate “bang for bucks”/likely gold medal strike rate per size of team as against likely overall medal tally.

On the overall spread of talent/potential total medals, AUS may still be marginally ahead of CHN, JPN & perhaps GBR but that gap is narrowly closing as AUS look likely to slide further into the ruck whilst others advance. What is likely to count against AUS is that its hard to see where there golds are likely to come from (even their Rio titles are looking precarious holds at… Read more »

Sorry but I see no really “bankable” Gold prospects for AUS whereas GBR has the likes of Peaty, SWE has Sjostrom, HUN has Hosszu who will at least snag one gold.

WERE C1 competing in Budapest then the W4X100 would still be seen as favourites. Without her, they MAY still sneak home but essentially its looking a very open race.

Chalmers may be Olympic champion but he hasnt shown that speed this year. Both he and McEvoy should be major factors in the event but one suspects we’ll have a number of swimmers within 47.5-48.0 with the potential for a blanket finish. Nobody should be seen as a safe bet in that one !

Yeah … and what about the 50 breast/fly/back, the men’s 800 free, the women’s 1500 free and the mixed free/medley relay? Do those events have anything in common? Yes, in fact they do, they are all non-olympic events, i didn’t think it would be necessary to spell it out that i would only take olympic events into consideration …

Good squad, with no real surprises. The 23 who made QT or CT (including relays) all included as expected. Rudin and Szanarek both came close to CTs (very, in Rudin’s case), while Carlin is a proven performer on the biggest stage, and they must feel confident she can get back to her top level in time for the championships.

The other three WCs are interesting. Greenbank suggests they’ve seen enough to feel he’s worth investing in, and I think there were signs at the British Champs that he’s getting closer to that transition from the juniors. Also might be a measure of their concern re CWH and wanting to explore other options for the medley relay asap.

Dawson is one… Read more »

Sadly, not all who made the CT are going. Tutton made it in the 200 Breast, but was 3rd and they didn’t take her.

I am a big fan of Chloe, but what justification could they have had to take Chloe Tutton? Both spaces in the 100 and 200 breaststroke have been filled, and you couldn’t really look to take a 5th breaststroker for a relay. I do think it’s a shame she’s not going because she is an asset to any team, but really can’t see how they’d justify taking her. It’s a testament to the strength of GB women’s breaststroke at the moment.

Yeah British women,s breaststroke is beginning to catch up with the men. There,s more depth recently especially in the 200 breast.

Yes, should have added “and finished in top 2” though to be fair I think UK swimming policy makes that clear, i.e. Tutton would have had to be given a WC to make the team. As Swimmer says there’s no real justification for taking Tutton, nor really any room for her on the team with all four br spots filled. She’s young, she’ll come again. I wonder if she took it out too fast in the final trying to get the QT and paid for it in the last 50; she’ll learn from that.

It’s a pity for Sutton but GB has suddenly great depth at women’s breaststroke and with the two per nation rules there was simply no room for her after 3rd and 4th place finishes.

Unfortunate too for Imogen Clark who stays home having won a non selection 50m event in a British record.

Sutton will be back next year for CWG and won’t have the same fierce competition for places as she represents Wales. GB has 6 top class girls but there’s only room for 4 of them. Sutton and Clark miss out this time.

Willis and Benson both missing out is also testament to the strength in depth with the men’s breaststroke.

That looks like a good strong team with a great mix of youth and experience. Obviously it is too early to tell but i am quietly confident for Worlds! A few high profiles surprisingly didn’t make it such as Dan Wallace, Chloe Tutton and Craig Benson and then Adam Barrett and Craig McNally never quite getting back to their best. All around it is an exciting time for British Swimming!