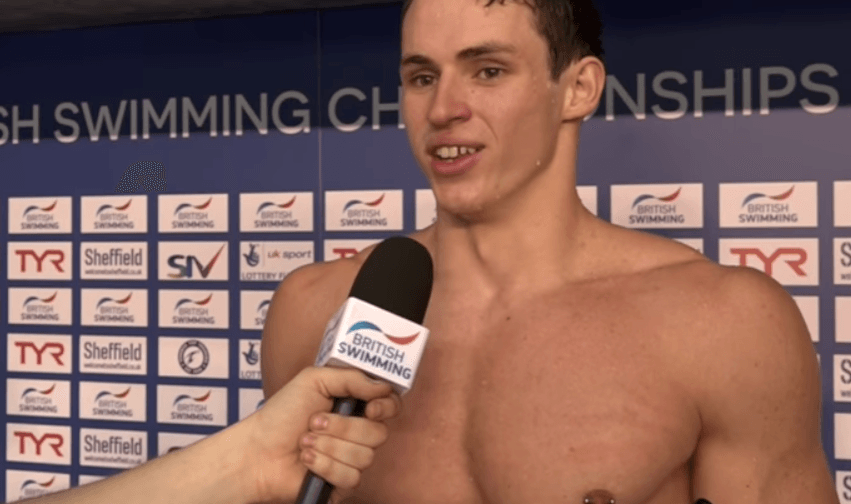 Watch Ben Proud follow-up his 50m freestyle national record from last night with another scorcher in the 50m butterfly. His post-race interview is also included within the post. Current photo via British Swimming

After already crushing a new British national record in the men’s 50m freestyle last night, 22-year-old Ben Proud turned around and clocked another stunner in the 50m butterfly race. After nabbing a swift morning swim of 23.60, the Energy Standard athlete turned on the jets tonight in Sheffield to register a scorching mark of 22.80. That easily overtook the previous national record held by Proud himself at 22.93 from his gold medal-winning performance at the 2014 Commonwealth Games.

Per the race video provided courtesy of British Swimming, Proud dares to just take one breath near the closing flags of the race, after nailing a superb dive, underwater dolphin kicks and breakout. He scored the only sub-23 second swim of the night and has now established himself as the #1 swimmer in the world in this butterfly splash n’ dash event this season.

In his post-race interview below, Proud said that he really hasn’t had a ‘good 50 butterfly since the Commonwealth Games’, so this race represents his coming back ‘to where he should be.’ He says he can now swim with ‘a bit more confidence’ with two national records under his belt.

That is not even very fast considering Cavic went out 22.69 in the 100 fly in Rome

Is this swim by Munoz still the WR? https://www.youtube.com/watch?v=YoMi2URZVnk

Yep, he really had a huge boost from the Polyurethane super suits. He swam 22.4, 22.5, then a 22.7 at worlds that year, he also swam a 50.4 100 fly that year. He was never even close to that pevel afyer the suits were banned. It’s a shame the suits still have just a big stain on the mens records. For example when cavic swam a 49.9 behand phelps’s 49.8 he went out in 22.69, this is with breaths and all. Than their beidermann, and Zhangs ridicoulous 800 with a 25 second last lap. They’ll eventually fall, butbin the meantime these unfair times are still their.

does ben have a nipple piercing ???