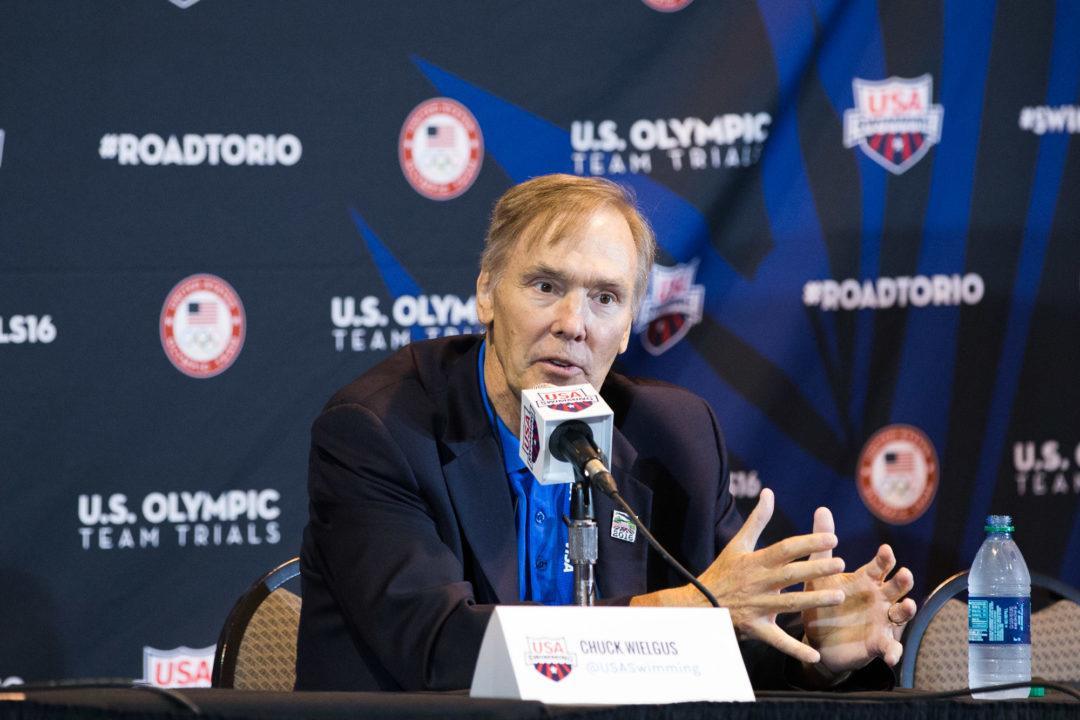 USA Swimming Executive Director Chuck Wielgus has died after complications from colon cancer, with which he has battled in multiple... Archive photo via Tim Binning/TheSwimPictures.com

USA Swimming Executive Director Chuck Wielgus has died after complications from colon cancer, with which he has battled in multiple rounds since 2006. He was 67.

Wielgus took over as USA Swimming’s Executive Director in July of 1997. Nearly 20 years of employment made him the longest-tenured chief executive under the USOC umbrella.

“This is an extremely sad day, as we lost Chuck Wielgus, one of the finest men I have ever had the pleasure to work alongside. He will be missed by all of us in USA Swimming and all his friends and colleagues around the world. Our thoughts and prayers go out to his wife, Nancy, and his entire family in this difficult time,” said USA Swimming Board of Directors Chair Jim Sheehan. “Chuck was one of the finest CEOs in all of sport and his leadership of USA Swimming has made it the premier National Governing Body in the Olympic movement. Chuck’s selflessness, compassion and intelligence have been hallmarks of his work with the staff, Board of Directors, athletes, coaches and volunteers of USA Swimming.”

Wielgus announced in January that he would retire as the organization’s Executive Director and USA Swimming has already begun the search for his successor.

Wielgus oversaw a period of unprecedented financial growth in American swimming as well as a period that included the greatest controversy in the history of the sport. During Wielgus’ tenure, The Arena Pro Swim Series helped legitimize professional swimming in the country, and the United States Olympic Trials moved from a 5,000-seat natatorium to a 17,000-seat basketball arena.

Wielgus also was in charge during a period that saw the revelation of widespread child abuse within the ranks of USA Swimming coaches, for which Wielgus went on national television and initially challenged those who demanded an apology from him. He later softened his stance, but was forced by public outcry to withdraw himself after being elected to the International Swimming Hall of Fame.

“Chuck Wielgus was an impactful and respected leader in the U.S. Olympic Movement,” said USOC CEO Scott Blackmun. “During his tenure at USA Swimming, American swimmers enjoyed more success and more support than ever before. He had a passion for his work and cared deeply about sport. Chuck fought a long and hard battle with amazing grace and optimism, and will be missed.”

During Wielgus’ time with USA Swimming, its membership has grown from 200,000 to 400,000, with revenues increasing by 600% in the same period. He also created the annual Golden Goggle Awards ceremony.

Wielgus is survived by his wife Nancy, daughters Savannah and Shelby, sons Chip and Tommy and four grandchildren.

Rest in peace, old friend. We’ll never forget the great work you did for our community on Hilton Head Island.

Consider the “modern era” of swimming, 1976 and onwards, which goggles were allowed and records somewhat stabilized, with a few exceptions. In the 3 non-boycotted Olympic Games from ’88 to ’96, the US never got more than 27 medals, and 13 golds.

In the 5 Olympics held when Weiglus became CEO, the US won more than 28 medals every time, including 33 in ’00 and ’16. The US also won 14 or more gold medals three times. Perhaps improbably, the long term trend for the United States is upward. London was a massive triumph. Despite a few rocky years that led many to believe American swimming was in decline, the US did what they do best in Rio: win.… Read more »

To put it another way: if you look at ’92 and ’96 and average the medal hauls you get 13 golds and 26.5 total. If you look at Sydney and onwards, the average haul has been 14 and 31.2. In a way, Wielgus has been responsible for 5 extra golds and 23.5 extra medals. Of course many, many factors go into this (arguably, the aberration that Phelps is could account for most of those increases), but the increase in medal production has been considerable.

I don’t see medal counts as being something that he should be judged by. That standard is for Frank Busch and the USA coaching staff. Phelps distorts everything anyway.

Rest In Peace you will be missed in your exit from this plane. Thank you for your dedication to swimming.

Chuck was a leader, visionary, a good man and a friend. I will miss him.

And let’s remember when commenting to watch how harshly you judge. We all make mistakes. Chucks missteps are greatly outwighed by his amazing character and accomplishments. There are few who have worked harder for this sport.

Or those missteps open the window to see his true character.

Condolences to all who grieve…

If he was such a great guy, he probably shouldn’t have been taking home a million dollar salary. He shouldn’t have been in that position being so sick anyway. Give some of that money back to the US athletes stipend, you know the people who actually make USA swimming so great? Such a waste of time and money.

Sometimes, when you have nothing good to say, it’s best to not say anything. This is one of those times.

He died. I’m sure his family will miss him. But the victims of sexual abuse who were assaulted _after_ he knew of the prior actions of the abusers will likely not share your sentiments of the good he did.

Someone has no sense of decency…

I agree he was sucking on the teet all the way to the end. Shoulda got out of the way after that horrid tv interview.

Just because someone isn’t physically swimming doesn’t mean they don’t deserve credit for creating and promoting institutions that bring people to the sport, encourage them to compete and reward performance.

I refuse to glorify someone just because they have passed away and I’m gonna have to disagree with you there, the athletes should ALWAYS come first. Someone in that position should be selfless and refuse to accept that amount of cash.
How many of the executives at USA swimming have actually swum at an elite level, brought home international medals and actually know firsthand what it’s like to be in the athlete’s shoes? Just curious.

I think it’s a lot to ask that anyone basically perform 40 hours per week of charity, especially if the market is willing t0 pay them 7 figures.

Secondly, I don’t think it’s as necessary as you seem to think that Execs have been top-flight elite swimmers. Bill Belichick is probably the greatest NFL coach in history. He never played a single down in the NFL. Athletic talent, and the ability to coach or be an administrator are imperfectly correlated.

I don’t think that Nah is saying he had to do everything for free but a million is a little outlandish when some of your world record holders aren’t even making a third of that.

I do agree that someone didn’t have to be a good swimmer to be good at coaching or running the business side of USA swimming. However, it does certainly help someone in that position to understand the time and sacrifices made by elite athletes if that person in charge has spent even a week in those shoes…. it may also be a little harder to scam your country’s best swimmers out of money that way if you know what they have gone through

It’ll be interesting to see if he is posthumously elected to ISHOF. I’d say that he deserves the honor.