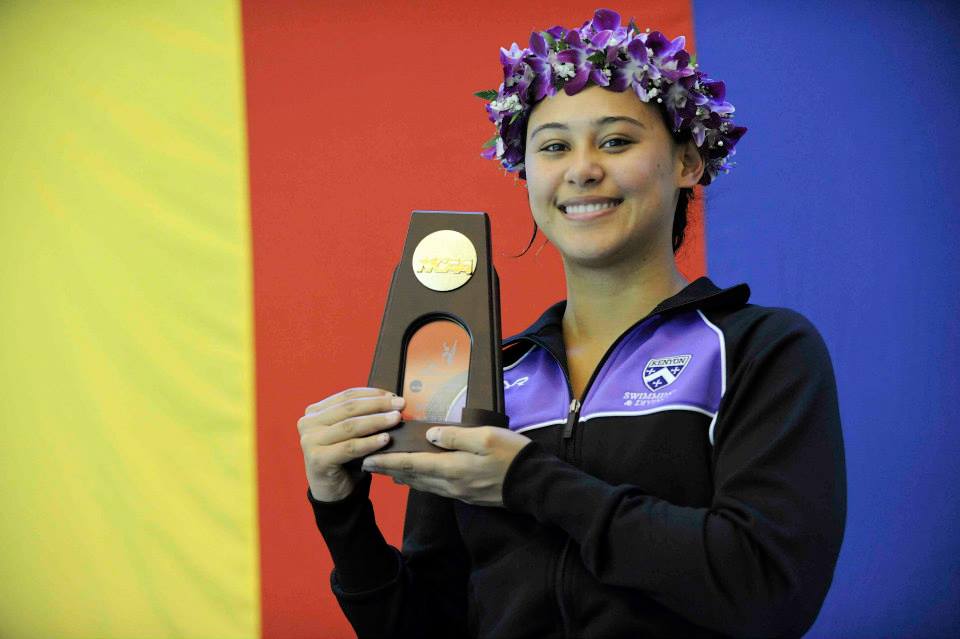 Kenyon College hosted the Winter Invitational as its first meet of 2016, and came away with victory on both fronts. The Invitational included swimmers from a trio of teams: Kenyon’s Lords and Ladies were the only Division III team present,  with opponents Oakland (Golden Grizzlies) and Cincinnati (Bearcats) being Divison I teams. The Invitational was a two-day meet, running prelims and finals.

On the women’s side, the Kenyon Ladies started the meet off strong and were out to the lead on Day One and held on for the top spot through Day Two. The Ladies finished with 1044 points. Cincinnati was second with 941 and Oakland finished third with 796.

Marysol Arce, a freshman for Kenyon, made a huge impact with her swims, tallying three individual victories over the course of the meet. Arce, a talented distance swimmer, is ranked in the top ten in Division III in four events (her lowest rank is 4th in the 1000, an event not contested at DIII NCAAs) with top rankings in both the 1650 and 400 IM. In the Invitational this weekend, Arce gave the Ladies victories in the 500 freestyle (4:58.86), the 1000 freestyle (10:18.82 – good for fourth in DIII) and the 400 IM (4:29.84).

Another swimming standout for the Ladies this weekend was another endurance athlete, senior Mariah Williamson. Williamson also has several top ten rankings in DIII this year, in five different events, including the 500 and 1000 freestyles, 400 IM and 200 butterfly, all of which she contested this weekend. Williamson’s lone victory was in the 200 butterfly (2:05.44), but she also aided Kenyon’s cause significantly in terms of depth, finishing as runner up to Arce in her other three events.

The third individual victor of the meet for the Ladies was senior diver Maria Zarka, who swept the boards. Zarka represents the first generation of recruited Kenyon divers for quite a few years, and swept onto the scene as a freshman to dominate the 3 M at NCAAs two years in a row. As a junior, she lost the 3 M title but was crowned victorious on 1 M. This weekend, she ran away with 1 M (251.10) and 3 M (26.35).

While individual wins and depth are important in a championship meet, so are relays. The Ladies picked up one relay win (200 freestyle relay) and three runner-up spots to maintain their lead.

Runner up Cincinnati fielded three individual champions, with Jackie Keire earning the Bearcats the bear’s share of points. Keire claimed victories in the 100 and 200 freestyle events (50.92 and 1:50.94, respectively) with a runner up finish in the 200 IM (2:07.7).

Perhaps in the most exciting event for the Bearcats, Carlie Perretta led a full sweep of the top three places in the 200 breaststroke, putting up a 2:21.63 to win. Teammates Dee Sopapong (2:22.37) and Enna Selmanovic (2:22.39) laid claim to the second and third spots, respectively. Perretta also contributed to the third place 400 medley relay squad.

Amanda Coffey and Tori Ritter traded off on the diving boards, gathering up first and second place points in both events. In the 1 M, Ritter took second (235.75) while Coffey was third (223.45). On 3 M, Coffey netted the second place points with her score of 210.35 while Ritter claimed third (209.35) for the Bearcats.

Teammate Nikki Flynn also contributed some points with her individual victory in the 50 freestyle (23.99), a runner up finish in the 100 freestyle (51.63) and legs on several relays. Flynn anchored the victorious 200 medley relay on the first night and led off the winning 400 freestyle relay to end Day Two.

Melissa Vandermeulen put up a 1:04.98 to win the 100 breaststroke for the Bearcats.

The Kenyon Ladies are back in the water January 22, hosting Ohio Wesleyan University at 6pm. Cincinnati returns to the competition pool January 23rd at home, facing Virginia Tech and Wright State. Oakland will be back in action January 23rd for a dual meet at Michigan State.

The Kenyon Lords ended Day One of the Winter Invitational in the lead and held on with tooth and nail through the final event of Day Two. Their final score was 1015, a bare 10 points ahead of runner up Cincinnati. Oakland finished in third with 780 points.

Three sprint Lords contributed the other individual event wins. Seniors Percy Gates, Joey Duronio, and Ryan Funk each locked down an event to add to the Lords’ tally.

After a DQ on their opening relay, Oakland’s Golden Grizzlies enjoyed a strong opening day, highlighted by Joe Smith absolutely dominating the 3 M diving and posting a Division I NCAA zone-qualifying score of 320.60 to do so. Smith went on to also win the 1 M, with a score of 297.10 in yet another excellent performance.

Joining Smith in the event winning category the first night were Tuomas Kiviluoma and Devon Nowicki. Kiviluoma captured the men’s 100 butterfly (49.77) finishing nearly a second ahead of the runner up. Later in the meet, Kiviluoma would go on to win the 200 freestyle (1:41.12) and play a role on multiple relays, including the victorious 400 medley relay.

Nowicki captured the 100 breaststroke the first night, posting a 56.33 to grab the title. He joined Kiviluoma on the winning 400 medley relay and also swam a leg on the runner up 200 freestyle relay.

On the final day, the Golden Grizzlies picked up one more individual event win, courtesy of Mitch Alters. Alters came home nearly a second faster than the rest of the field to snap up the win in the 200 butterfly with a final time of 1:52.41 for Oakland’s final win of the meet.

The Kenyon Lords are back in the water January 22, hosting Ohio Wesleyan University at 6pm. Cincinnati returns to the competition pool January 23rd at home, facing Virginia Tech and Wright State. Oakland will be back in action January 23rd for a dual meet at Michigan State.