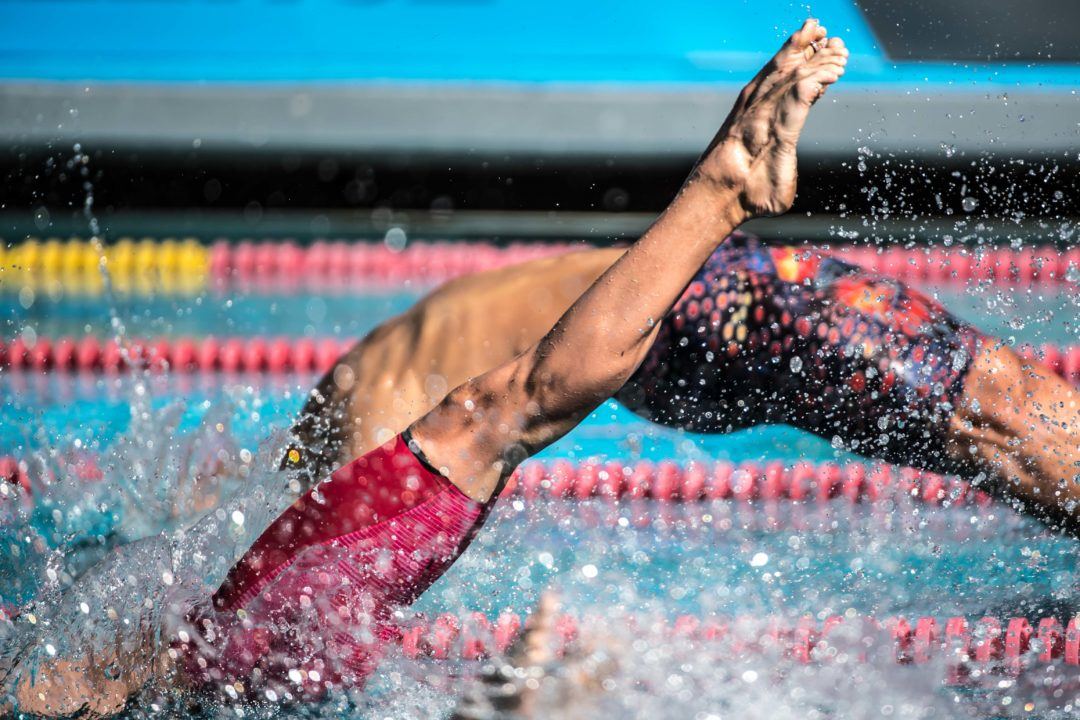 While the big story in Division III has been the late removal of Amherst’s team from NCAA psych sheets as a punishment for drinking on the team bus home from their conference meet, astute followers of Division III swimming noticed another absence: Worcester Polytechnic Institute or WPI.

We spoke to coach Paul Bennett, who said that Bauer couldn’t attend the meet due to an academic conflict (Bauer is in Australia for this academic quarter), and that his absence caused the relay to be bumped from NCAA invite status.

Bennett says the NCAA’s rule interpretation is that schools don’t “own” relay times – the four athletes who achieved the time do. So though WPI had gone a time that would have been invited, because they put up the time with Bauer leading off, the time is no longer NCAA invite eligible when Bauer is not attending the meet. Bennett says the NCAA sent out a memo in early February with that interpretation, but that the policy came as a surprise to him and other coaches he’d talked with.

The NCAA Pre-Championships Manuel for Division III doesn’t address this directly, but does lay the groundwork for the interpretation. Schools are required to include the names of the swimmers who achieved each relay entry time. The memo itself, sent out on February 9th, explains the rule interpretation as follows:

“It’s really kind of disappointing to us,” said Bennett.

WPI has no other qualifiers and won’t be competing at the meet. The other three relay members would have been able to compete in their B cut events had the relay qualified, but without individual invites of their own, they are on the outside. WPI finished 16th last year and were sixth in the 200 medley relay. Bauer was seventh in the 100 back a year ago.

Curious — sounds like Bauer is studying abroad this semester, so he made the choice/decision to go abroad either before or despite knowing of his and his team’s qualifications for the meet? I know that student-athletes juggle both titles, but seems like an interesting choice to go abroad during the quarter/semester of championship season.

I belive wpi does trimesters and they just finished their 2nd trimester, so he would be studying abroad for the last 1/3 of the year.

WPI alumni here, the school is actually on the quarter system so each term is half a semester. Seems to me like Bauer is either on IQP or MQP which means that he is away for the winter term

Couldn’t he come back, just for the day of the meet?

He’d barely have to be here for…

I was hoping for this! Thanks!

This is a different interpretation than in the past — A number of times Schuyler Beeman of Midd declined to attend the national meet due to an academic conflict and their relay teams still went. Anyone know the genesis of the change? This actually seems fairer — assuming that the slot is filled.

Hoping that the Amherst situation will result in a slight adjustment to the rules whereby if a relay drops out another one is added.

This doesn’t make sense in terms of teams not owning the relay time – how would other teams change their relays for nationals if they didn’t own the time?

This is from the D3 competition pre-championship manual – it clearly says fastest time by “institution” not by the aggregate of the four relay swimmers! It also says that any eligible swimmer from the institution’s championships roster may compete on that relay.

“Relay Events. Each institution may enter one team per relay event. The fastest time (actual or aggregate 25-yard or
converted metric) that has been achieved by the institution during the specified qualifying period must be submitted. The
NCAA championships entry program will automatically… Read more »

While this interpretation has been applied previously when a swimmer on a relay became unavailable prior to the official psyche sheet, it certainly begs the question as to why the NCAA rules permit an institution to bring an alternate (at their own expense) for a selected relay. If the selected relay becomes “invalid” whenever someone on that relay becomes unable to participate then of what value is an alternate since they would never be able to participate due to the “de-selection” process this memo implies will always take place.
For 50 years or more the NCAA concept was that a relay belonged to an institution and it is only in the recent years of the usaswimming database that this… Read more »

Can anyone speak to the original purpose of the “alternate” language in the code? I would argue exactly that the NCAA should either strike all wording of the alternate from their selection process or make the wording more specific (I could understand if the alternate was present only in case of an injury or illness… but I also think that this too could be exploited and difficult to govern). I’ve never understood why that was permitted under the DIII model with a fixed number of competitors; if that’s the case, why not open it up as a free-for-all and say that you can pay your way for anyone with B-Cuts who wasn’t already selected (I’m being facetious, but you get… Read more »

The “pay their own way” alternate exists because originally NCAA relays belonged to the institution, not to the four swimmers on the selected relay and any swimmer on that team’s entry roster was eligible to swim at the NCAA meet on a qualified relay. However, the NCAA would only pay travel & per diem costs of those swimmers who had qualified for the meet and competed in a qualifying event. Since there is now a cap limiting the specific number of athletes permitted to be selected to the NCAA meet, in the case of a team with only four swimmers qualified for the NCAA meet on a relay, it is “good stewardship” to permit an alternate so that only one… Read more »

Well if he was a relay only swimmer he would have to swim the relay. And it’s probably against at least the spirit of the rules to enter someone you know won’t swim. But this plus Amherst should force a definitive guidelines on what to do for relay entries.

Jack Bauer is a great role model. D3 is student-athlete. Athlete comes SECOND. Jack is an amazing swimmer, but has an academic conflict which comes FIRST. Jack has decided to go to Australia for his school work. WPI is on a quarter system so it was not his intention to “screw his teammes over,” nor does he have the opportunity to fly back for “24 hours.” I applaud Jack and think this is an issue of the NCAA’s new rules.

Watch it 2019 swim. Don’t get too comfortable. Jack Bauer coming in hot and cultured