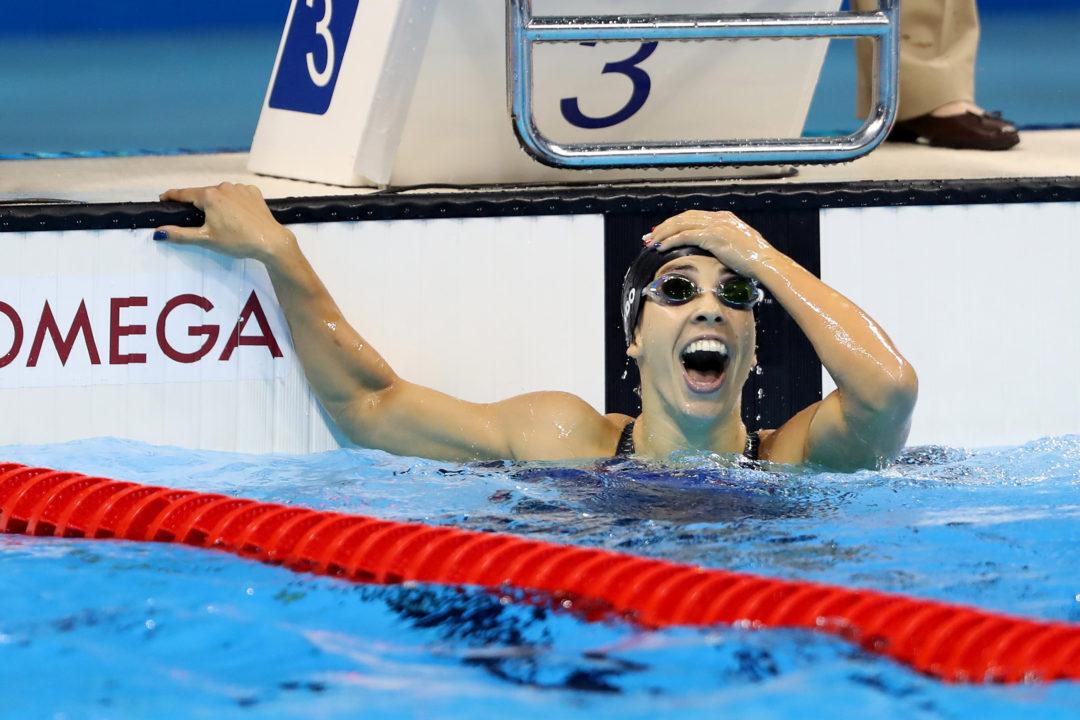 American Maya DiRado announced even before the Rio Olympic Games that her performances there would indeed be her last. Archive photo via Simone Castrovillari

It seems as though the 2016 Olympics in Rio were just yesterday, but the reality is that we’re already well on our way to being 2 years removed from the last edition of the Summer Games. We’re now less than 900 days away from the 2020 edition set for Tokyo and, although we don’t know yet who will be competing, based on retirement announcements, we know which medalists from 2016 will most likely not.

A good portion of the men who stood on the Rio podium remain in action today, with China’s Sun Yang, America’s Nathan Adrian and Britain’s Adam Peaty as just a few examples of the swimmers still very much at the top of their game. However, others have decided to move on to their life outside the pool, including America’s Connor Jaeger. Jaeger crushed a new American Record en route to claiming silver in the men’s 1500m freestyle event, but hasn’t raced since that monumental performance.

David Plummer is another American medalist from 2016 who hung up his goggles, deciding against trying to defend or upgrade his bronze medal finish at the Rio Olympics. Both are joined by their teammate, the most decorated Olympian in history, Michael Phelps, who retired (again) after racking up his 28th Olympic medal, further securing his status as an icon across all sports.

But there are other high performers from Rio whose status is not as definitively known, as competition appearances have been scarce. For instance, the man who fell just .04 shy of raining on Phelps’ 200m fly parade, Masato Sakai of Japan, competed in the Tokyo stop of last year’s FINA World Cup, but opted out of competing at the high-profile Kosuke Kitajima Cup, Kirara Cup and Konami Open that all took place earlier this year as a ramp-up to April’s Japanese National Championships.

Then there’s Florent Manaudou of France, the silver medalist in the men’s splash n’ dash in Rio, who released a statement concerning his official slowdown from the high-speed life of an aquatic sprinter, but stopping from pointing to outright retirement. . In September 2016 he said, I have thus decided to take a break from my triple daily workouts (2 sessions of swimming and 1 session of weights), yet still remain an active swimmer who will compete in a few meets this year.”

One of those meets was the Championnats de France Militaire de Natation in March 2017. The 27-year-old raced his signature sprints of the 50m fly, 50m free and 50m breast, but has been quiet since.

On the American front, both Jimmy Feigen and Conor Dwyer have been missing from high-profile meets for some time now, while no official announcements have been made. For Feigen, a prelim swimmer for the men’s 4x100m freestyle gold in Rio, the former Texas Longhorn hasn’t raced since 2016 and also hasn’t been drug tested by the USADA since Q3 2017.

As for Dwyer, the individual 200m freestyle bronze medalist from 2016’s Games has yet to compete this season, with his last time in the pool represented by his appearance at 2017’s Energy for Swim charity event overseas. Of note, Dwyer was tested by the USADA 3 times in each of the 1st 3 quarters of 2017, yet wasn’t tested in Q4 of 2017.

We just announced the retirement of Rie Kaneto, the 200m breaststroke Olympic champion from Japan, leaving the top of the podium open for a new face come 2020. Her compatriot Natsumi Hoshi, who earned bronze in the 200m butterfly, also decided to say good-bye to her competitive career, opting out of entering another Olympic cycle.

Canadian star Brittany MacLean made her retirement announcement shortly after the Rio Olympic Games. After battling back after injury and sickness throughout her career, MacLean capped off her Rio performances with a bronze medal as a member of her nation’s 4x200m freestyle relay.

One of the most successful women in Rio, the United States’ Maya DiRado, wasn’t shy about announcing ahead of the 2016 Games that she intended retire no matter what her performances yielded, and she certainly ended her career with a bang. The former Stanford stand-out raced her way to a gold medal in the women’s 200m backstroke, followed by silver in the 400m IM and bronze in the 200m IM. DiRado was also a critical component of America’s gold medal-winning 4x200m freestyle relay.

Relay gold medalist for America, Allison Schmitt, falls under the ‘no official announcement category’, although she did stir up some conversation with social media posts last year. After taking relay gold and silver (800 free relay, 400 free relay) in Rio, Schmitt hasn’t raced in an official meet since.

In spite of not racing, however, Schmitt never left the USADA drug-testing pool: the one thing a swimmer can do to officially retire. When asked whether or not she was making a comeback, Schmitt’s long-time coach Bob Bowman didn’t say it was definitely not happening, but he said that it was “hard to say” and that she wasn’t “seriously training” right now.

I think Schmitt will be back.

Yep.
But for sure the biggest mystery since Rio is Caeleb Dressel… We haven’t heard a single thing about him or his swimming since August 2016.

Dressel has been tearing it up in the SEC breaking multiple American SCY records. He’ll be in Tokyo without a doubt.

Beisel was not a medalist in Rio.

Down votes for simple information?

My guess is she is done. Had a very good career.

I think newcomers like Ledecky, Eastin, Smith and Gelat moving into the 400 IM might be a deciding factor as well

She’s not coming back she made it pretty clear.

Yea, but what about Beisel?