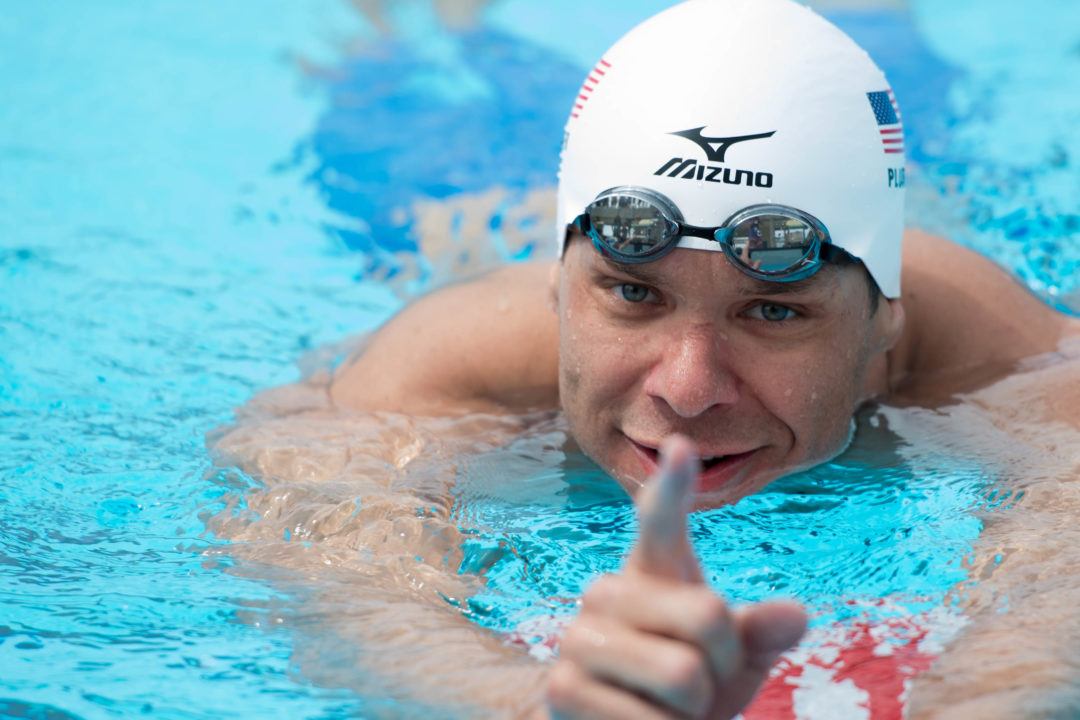 It was as good a redemption story as you'll find: David Plummer made the U.S. Olympic team for Rio four years after finishing a heart-breaking third at 2012 Trials. Now, with Olympic gold and bronze to his name, Plummer is officially retiring from the sport. Archive photo via Mike Lewis/Ola Vista Photography

Three plant-based dishes that are packed with essential nutrients to keep you stay cool and energized during the watch party.

It was as good a redemption story as you’ll find: David Plummer made the U.S. Olympic team for Rio four years after finishing a heart-breaking third at 2012 Trials. Now, with Olympic gold and bronze to his name, Plummer is officially retiring from the sport.

Plummer told SwimSwam this week that he’d be making his retirement official, penning a long and heartfelt letter to his family, his friends, his fans and those he battled against for that Olympic berth. He specifically thanks his mom and his wife for supporting his late-career run to the Olympics at 30 years old. And he notably thanks the American backstrokers against whom he competed, specially thanking his Olympic teammate Ryan Murphy, former world record-holder Aaron Peirsol, and Matt Grevers, the 2012 Olympic champ who was the “Trials Third” behind Murphy and Plummer in 2016.

You can read the full letter below, published without edit:

I haven’t been in the water since Rio, so this has been true for a while, but now I am saying it out loud and I am admitting it to myself. I am retiring. I am done swimming.

This was a hard decision to make. I have defined myself as a swimmer since I was five years old, but it comes down to this: I don’t want it any more. The majority of my life I have wanted to swim fast more than I wanted to breathe. I don’t want it that way anymore.

I’ll never stop loving swimming and I know I will miss racing. Our sport is one of the most challenging in the world, but as they say, “it’s supposed to be hard, the hard is what makes it great.”

When you race you are completely alone, but no one prepares on their own. With that in mind I have to say thank you to some people. I will in no way be able to thank all of my friends, family and fans who have supported me through my career, but I have to mention a few people, most importantly my mom and my wife.

My mom is one of the strongest women I know. When our family was in turmoil she remade herself and did everything she could for my brothers and I. I will never be able to thank her enough. All I can do is try and be as strong as her.

My wife is genuinely my better half. Seriously, she is better at everything. Before she retired she could even beat me pretty handily in a kick set. She is also an amazing doctor, mother and friend. She gives her life in the service of the most at risk babies in the city. She gives those babies a chance at healthy lives and their families much needed comfort. I can’t believe how lucky I am to have her in my life.

I want to say thanks to all my competitors over the years. I was taught at a young age that you always want to race people who were better than you so that you could improve yourself in the process. As an American backstroker there was never a shortage of people faster than me. I got to race guys like Ryan Murphy and Aaron Piersol (and the list goes on and on). I also got to race a guy named Matt Grevers. He is a guy who will haunt your dreams. I actually had nightmares of him out-touching me in races. More importantly I had a chance to get to know him and learn from him. He is a fierce competitor and a gracious man. I’m proud I had plenty of chances to be in the lane next to him, fighting for that touch.

I also want to say thanks to all of my teammates and coaches through the years. I wasn’t always the easiest to get along with, but without your help I never would have been able to achieve my dream.

I have been told by many people since the Olympics that they were inspired by my perseverance. I always just thought I was a slow learner. Honestly, I just couldn’t find a way to step away when I still had more to accomplish, more to prove to myself. I am humbled to walk away as a member of the U.S. Olympic fraternity. I got to be a member of the U.S. Olympic Swim Team and I’m proud of the way we competed. Best damn team in the world.

To the next generation who aspires to be on that team, I would like to say this; don’t do it for anyone else and if you can imagine a happier life away from swimming don’t do it at all. But if you have to do it, I mean deep down can’t see yourself doing anything else, then give it your whole heart. Because while swimming will at some point break your heart, the race is something truly great. It will reveal what you are made of and it is worth your time and effort.

Thanks for indulging my lengthy ramblings and thanks for following along. I truly love you all.

agree (nothing against Grevers, Murphy) but i think many people were excited for David when he made the team.

not gonna lie….i teared up a good bit reading that letter. david will be missed

Who’s in charge of talking him out of retirement?

“..I don’t want it any more. ” Very emotional and very decisive. The decision made without hesitation. Very familiar feeling of coming to the crossroads and leaving the past behind gratefully but without much regret. Good luck to you David with whatever you do next in your life.

He achieved his swimming goals and dreams, so he can retire happy.

He says “When you race you are completely alone, but no one prepares on their own.”

You need a lot of support from coaches and family to win an Olympic medal.

That’s a beautiful letter. Congratulations to David and best of luck to him in his post-swimming pursuits. Truly a class act.

David, best luck in your next chapter. Thank you for all the awesome racing. You did not swim or “do it” for others but I did enjoy watching you race. You will be missed. Come back to the pool or pool deck some times.